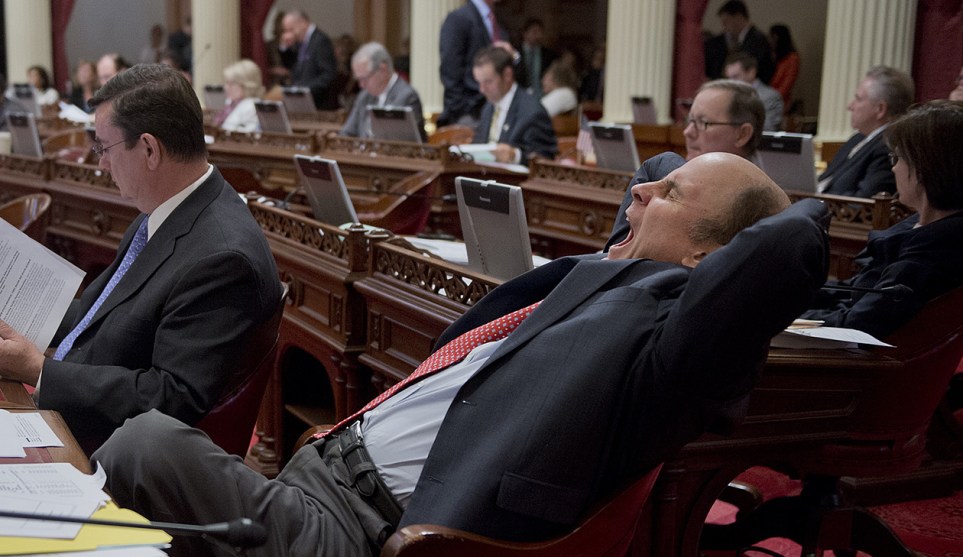 I’ve been hospitalized once in my life, four years ago, and ever since then a very specific question has rattled around my brain, fruitlessly seeking an answer: Why are hospitals designed to allow patients as little sleep as possible?

Is my phrasing a little too aggressive? Designed to prevent sleep? Maybe that’s going a tiny bit too far. Instead let’s say: Why do the people who design hospitals not give a rat’s ass about patients getting any sleep?

There. That’s better. And it’s nuts. The whole point of hospitals is to care for sick people, and getting adequate sleep is a critical part of recovery. So why would every part of every hospital be designed without the slightest consideration of sleep? I’ll hand the mic over to Austin Frakt for a bit:

Peter Ubel understands the problem as both a physician and patient. When he spent a night in the hospital recovering from surgery in 2013, he was interrupted multiple times by blood draws, vital sign checks, other lab tests, as well as by the beeping of machines. “Not an hour went by without some kind of disruption,” said Dr. Ubel, a physician with Duke University. “It’s a terrible way to start recovery.”

….Solutions aren’t hard to fathom. Dr. Ubel listed some in 2013. Hospital workers could coordinate so that one disruption serves multiple needs: a blood draw and a vitals check at the same time instead of two hours apart. Or they could allow patients’ needs to guide schedules. If a patient is at low risk and can go six or eight hours without a vitals check, for example, perhaps don’t do that check once every four hours.

Small changes in hospital routines like these can go a long way. A clinical trial to test them found that they significantly reduced the proportion of patients reporting hospital-related sleep disruptions, and they cut sedative use in half. These small changes can even increase patients’ ratings of hospitals, which are now part of Medicare quality measures. The key insight seems to be to prioritize patients over tests and other interruptions that can be deferred.

As Frakt says, solutions aren’t hard to fathom. In fact, they’re trivially easy to figure out. This is why hospital routines strike me as deliberate negligence: they could only be put in place by administrators who literally don’t care about anything except the convenience of doctors.

Is there anything we poor patients can do? It’s hard to say. One time I asked a nurse to turn off the sound on the IV drip, and he actually did try to do it. But apparently he didn’t know how, because it kept beeping all night regardless of whether there was a problem. This does not give me great confidence in the possibility of further noise-reduction measures.

FWIW, though, it is sometimes possible to get better treatment. After a couple of days during my stay, I made a sort of handshake deal with my nurses to leave me alone between 11 and 7. This mostly worked (and was reasonable in my case since I was only there waiting for the first round of chemo to start). I also refused to allow the night nurse to draw blood at 4 am, and that was that. She never came back, and that was fine: after all, there are lots of cases where they really don’t need your counts on a daily basis. And they certainly don’t need them at 4 am. That’s merely for the convenience of doctors, who want the results back by 8 am.

There’s much more that could be done about this, but I’ll spare you. This is my rant for the day—now backed up by an official column in the New York Times. I can’t wait for the letters to pour in offering BS excuses for why none of these solutions is really possible.