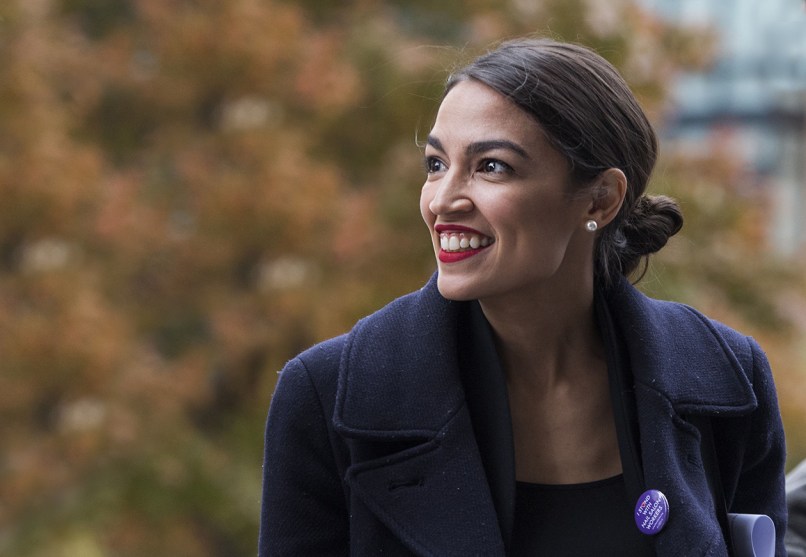 Alexandria Ocasio-Cortez sure does know how to attract attention. I guess that’s no surprise: she’s photogenic, she’s young, she’s the leader of the #Resistance, and she defends herself pretty well on camera without constantly resorting to tedious talking points. She’s made for our era.

But sometimes she screws up. Today Chris Cillizza—joined by the media’s entire universe of professional fact checkers—dinged her for a past mistake that she defended last night on 60 Minutes:

“I think that there’s a lot of people more concerned about being precisely, factually, and semantically correct than about being morally right.” — @AOC https://t.co/jKoBUDAa9v

Progressive Twitter went nuts, saying that Cillizza took the quote out of context. Cillizza replied that his tweet was limited by a character count, and then AOC chimed in:

.@CillizzaCNN – looks like your ‘character count’ argument to avoid including my full quote is straight up wrong.

Also: where are all the “Pinocchios” for Republicans this week (many of whom are much more senior than me) blatantly lying about marginal tax rates? https://t.co/d8VIMLKaYD

So what is the full quote? Here you go:

Anderson Cooper: One of the criticisms of you is that— that your math is fuzzy. The Washington Post recently awarded you four Pinocchios…for misstating some statistics about Pentagon spending?

Rep. Alexandria Ocasio-Cortez: If people want to really blow up one figure here or one word there, I would argue that they’re missing the forest for the trees. I think that there’s a lot of people more concerned about being precisely, factually, and semantically correct than about being morally right.

Anderson Cooper: But being factually correct is important—

Rep. Alexandria Ocasio-Cortez: It’s absolutely important. And whenever I make a mistake. I say, “Okay, this was clumsy.” and then I restate what my point was. But it’s— it’s not the same thing as— as the president lying about immigrants. It’s not the same thing, at all.

I’m puzzled. AOC had said that a recent study documented $21 trillion in accounting errors at the Pentagon. Use this for health care instead, she said, and it would practically pay for Medicare For All.

Now, for the record, this is not even close to correct. That’s $21 trillion unaccounted for, not $21 trillion that wasn’t used. It comes from a recent article in The Nation, which in turn was based on an estimate last year from Mark Skidmore of Michigan State University, who in turn based his estimate on an extrapolation from recent Pentagon audits along with other government sources. He says there have been $21 trillion in “unsupported journal voucher adjustments” for the years 1998-2015, which—and this is important!—includes adjustments both up and down.¹ The net value of the adjustments is not given, and Skidmore makes no allegation that any of this money literally went down a black hole. It’s certainly possible that some of it might have disappeared, or been the product of fraud, but the vast bulk is almost certainly due to incompetent accounting systems that produced a ton of positive and negative errors that mostly canceled each other out. In other words, this is not “in the ballpark” but not quite right. It’s just wrong. It would be a great idea to fix the Pentagon’s accounting systems, but doing so would produce only a tiny fraction of what Medicare For all would cost.

So here’s my question: after the Post fact check was published did AOC correct herself? After all, that’s the missing part of the quote everyone is complaining about. As near as I can tell, she didn’t, really. Here’s how she responded to the Post last month:

“To clarify, this is to say that we only demand fiscal details [with health and education], rarely elsewhere,” Ocasio-Cortez said in a follow-up tweet. “The point, I think, was more about how we care so little about the ‘how do you pay for it’ when we are talking about war and military spending,” her spokesman wrote in an email. “It’s only when we are talking about investing in the physical and economic well-being of our citizenry that we become concerned with the price tags.”

I suppose this counts as “restating her point,” but it doesn’t count as admitting an error and owning up to it. Nor does it help her cause to complain that she’s being fact-checked too much and other people should be fact checked instead. Nor to suggest that she’s being picked on because she’s a woman of color. Nor that fact checkers don’t check enough of her true statements.

Finally, this afternoon, AOC tweeted, “I think the check is a very fair one to masked, and that the coverage illuminated the issue far more than my tweet did.” But she’s still referring to her tweet as “confusing,” not wrong. That’s too bad.

Personally, I really, really like AOC. She’s the kind of photogenic spokesman that progressives need, plus she knows how to drive conservatives crazy. Nor do I even mind occasional fuzziness in an effort to communicate broad points—something she does well. Still, her inexperience excuses only so much. If she gets a reputation for spouting nonsense without bothering to understand it—and she seems to be heading in that direction—her star is going to dim. I think she’d be well advised to slow down and study up just a little bit.

¹A Pentagon spokesperson drolly notes that “DoD hasn’t received $21 trillion in (nominal) appropriated funding across the entirety of American history.”