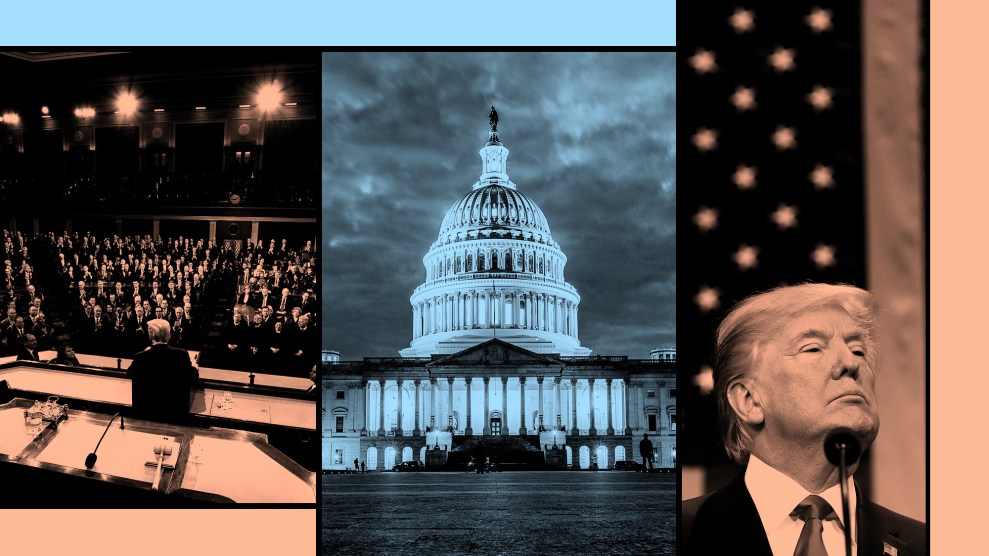 Do you feel unified now? No?

Me neither. But the State of the Union address is a fundamentally political speech, so no one should be surprised that it turned out to be a political speech. Besides, as near as I can tell, Trump’s idea of “unifying” is limited to not saying the word “Democrat” at any time. Even during the culture war part of the speech, Trump said only that “lawmakers” cheered the murder of unborn children, not Democrats.

On CNN, Van Jones called Trump’s speech “psychotically incoherent.” That seems a little rough, doesn’t it? But it’s true that he hopped back and forth between attacking first and then insisting that, really, we’re all one nation and we all believe in the same things. My favorite part was when he said we have to turn our backs on the “politics of revenge.” Donald Trump said that! Donald Trump!

On the truthfulness front, Trump mostly avoided citing specific facts but fudged dates with abandon. His remarks on the economy were typical: he simply declared that America was a hellscape when he took over and now it’s an economic paradise. His numbers weren’t wrong, but his implications were pretty plainly misleading. On the other hand, some of his claims were just untrue. For example, he said that prescription drug prices had fallen last year for the first time in 46 years. That’s just false. He’s said this before, and I really don’t know where it comes from.

On the marketing front, sex sells! Trump’s border comments focused over and over on sexual assault, slavery, and forced prostitution. And his abortion comments were as nasty as I’ve ever heard in a SOTU.

Overall, it was a fairly pedestrian speech. It hit the hot buttons Trump wanted to hit, and he kept the lies to a minimum. On the unification front, there were plenty of veterans, childhood cancer survivors, and Dachau survivors. However, it was weakly delivered, which is normal for speeches that Trump reads from a teleprompter. In the end, it will have no effect on anything.

A full transcript of the speech is here.

10:31 pm – “We must always keep faith in America’s destiny: that one nation, under God, must be the hope and the promise and the light and the glory among all the nations of the world.” And that’s a wrap.

10:14 pm – Trump wants to declare victory and get out of Afghanistan. That’s OK with me, but make no mistake: as soon as we leave, the Taliban will take over. They’ll certainly try, anyway.

10:06 pm – Trump says other nations are finally paying their fair share of defense costs. Over the “past couple of years” we’ve secured $100 billion in new spending from NATO allies. I don’t know if that number is correct, but “past couple of years” is pretty slippery. This increase began in 2015, after Obama pushed NATO members to increase spending following Russia’s annexation of Crimea.

10:02 pm – Trump says lawmakers in New York cheered after passing a law would “allow a baby to be ripped from the mother’s womb moments from birth.” I guess this is the culture war portion of the speech.

9:48 pm – “We have more women in the workforce than ever before.” In raw numbers that’s true, since our population keeps growing. But not in any sense that really matters. Here is EPOP for women:

9:46 pm – Trump is now explaining that we’ve already built fences at all the places that had high levels of illegal crossings. He doesn’t quite realize that’s what he’s saying, though.

9:41 pm – This section of the SOTU is basically a repeat of Trump’s border speech a couple of weeks ago. It’s a little more coherent, though, if no more truthful about the actual state of the border. It’s definitely more focused on sex crimes.

9:37 pm – Trump once again says crime is up thanks to illegal immigration. This is untrue.

9:36 pm – Politicians are pushing “open borders.” Which politicians? None that I know of.

9:33 pm – “Caravans are on the march to the United States.” More troops are being moved to the border to stop this “tremendous onslaught.” This is Trump’s best effort to make the border sound like it’s in crisis.

9:25 pm – No more witch hunts! “If there is going to be peace and legislation, there cannot be war and investigation.” That’s not quite “nothing to fear but fear itself,” but it’s about as poetic as Trump gets.

9:18 pm – “We have launched an unprecedented economic boom.” Aside from the fact that it started in 2010 and isn’t unprecedented, I guess that’s right.

9:07 pm – Trump says millions are watching tonight, hoping we will “govern not as two parties but as one nation.”

9:05 pm – Trump’s tie is crooked. With any luck, this will be my pettiest comment of the evening.

9:00 pm – As a random pre-SOTU comment, can I just say that my least favorite recent innovation is the endless parade of politically motivated guests. This is a bipartisan complaint on my part, but surely this year’s presidential guest, a child who has been bullied because his name is Trump, proves that this tradition has now completely jumped the shark. UPDATE: This never happened. I’m not sure why.

8:50 pm – And with that out of the way, it’s time to begin the kumbaya portion of our evening.

8:49 pm – To set the stage for tonight’s speech about togetherness and comity, President Trump hosted a lunch for television anchors at which he called Joe Biden “dumb”; Chuck Schumer a “nasty son of a bitch”; ridiculed Virginia Governor Ralph Northam for “choking like a dog” at a press conference where he talked about a blackface photo in his medical school yearbook; and noted that John McCain’s book “bombed.” McCain, of course, died last August.