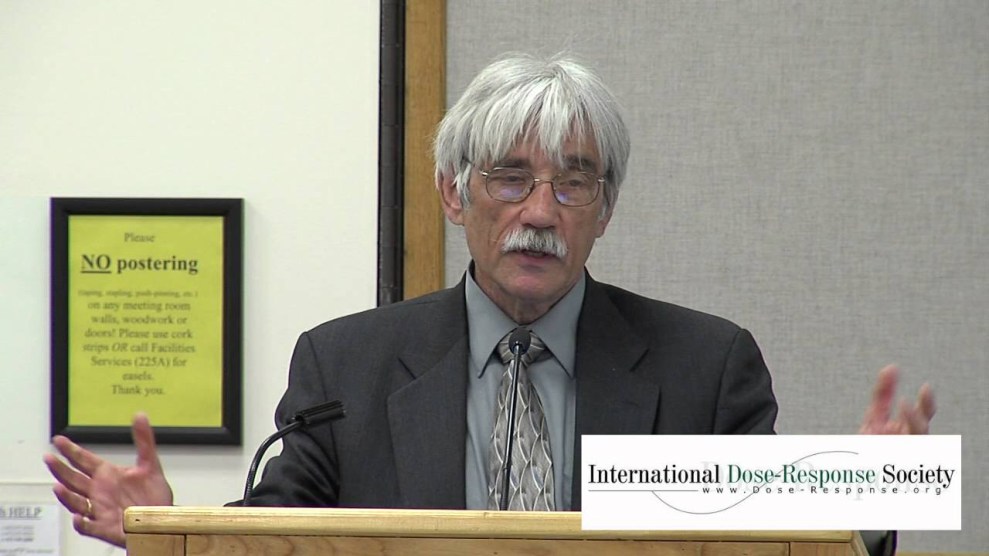 Susanne Rust of the LA Times brings us the latest fabulous news from the Trump adminstration:

In early 2018, a deputy assistant administrator in the EPA, Clint Woods, reached out to a Massachusetts toxicologist best known for pushing a public health standard suggesting that low levels of toxic chemicals and radiation are good for people….Less than two weeks later, [Ed] Calabrese’s suggestions on how the EPA should assess toxic chemicals and radiation were introduced, nearly word for word, in the U.S. government’s official journal, the Federal Register.

“This is a major big time victory,” Calabrese wrote in an email to Steve Milloy, a former coal and tobacco lobbyist who runs a website, junkscience.com, that seeks to discredit mainstream climate science. “Yes. It is YUGE!” wrote Milloy, in response.

We could stop right there if we wanted. Steve Milloy is one of the most prominent purveyors of crap science in the world. He’s a climate change denier with close ties to the tobacco industry and the author of (among others) Green Hell: How Environmentalists Plan to Control Your Life and What You Can Do to Stop Them. If Calabrese and Milloy are buddies, that’s probably all you need to know.

And where has Calabrese’s funding come from? Do I even have to tell you?

By the 1990s, Calabrese had solidly established himself as a trusted scientist with the tobacco industry. He found they were interested in research that questioned the methods that regulatory agencies use to assess risk.

….It was when he began his work on hormesis that Calabrese got attention from a broader range of industries. With seed money from R.J. Reynolds, Dow Chemical, Procter & Gamble and others, as well as the EPA, Calabrese established a hormesis working group at the University of Massachusetts, which he called the Biological Effects of Low Level Exposures, or BELLE….Between 1990 and 2013, Calabrese received more than $8 million from companies and institutions, including R.J. Reynolds, Exxon Mobil, Dow Chemical, General Electric, the Department of Energy and the U.S. Air Force, to conduct research on hormesis.

There you have it. As usual, the tobacco industry is the root of all scientific evil, and their approach long ago caught on with every other polluting industry out there. “Manufacturing doubt” is their goal, and abuse of research into processes like hormesis is their holy grail. It’s not that hormesis is impossible. There may well be a few isolated examples where it has application—and as far as polluting industries are concerned, one example is plenty. They can then fund research claiming to find it all over the place.

If you want to read the whole grim story, check out Rebecca Leber’s piece from last October about how Calabrese’s ideas became embedded in the EPA’s rulemaking process after Trump took office. It’s the Trump era in a nutshell.