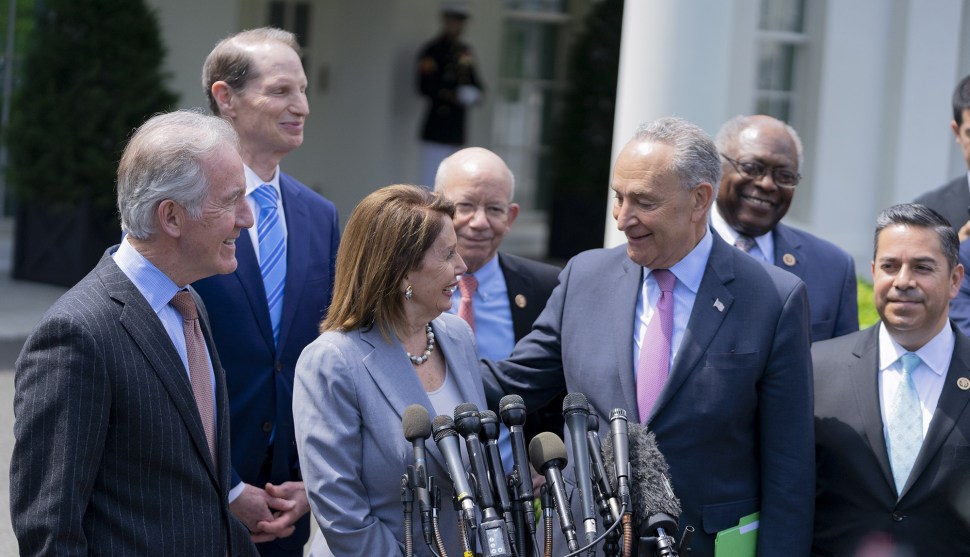 "So I told him, 'Don't you dare slam that door, Don,' and he just slunk out without a peep. Funniest thing I ever saw."Douglas Christian/ZUMA

Donald Trump’s trillion-dollar infrastructure bill was obviously DOA from the moment he first announced it. His own party made it clear that they had no intention of spending a bunch of money on infrastructure, and it would have been a debacle if he’d sent an actual plan to Congress. On the other hand, he had promised infrastructure and Democrats were playing along. What to do?

Easy! Make up some whiny nonsense about how Democrats are being mean:

President Trump abruptly ended a meeting with Democratic leaders on Wednesday, saying he was unable to work with them on legislation following comments by House Speaker Nancy Pelosi (D-Calif.) that he was “engaged in a coverup.” Trump made an unscheduled appearance in the Rose Garden shortly afterward and in a meandering 10-minute address said he had left the meeting with Pelosi and Senate Minority Leader Charles E. Schumer (D-N.Y.) at which they were supposed to talk about working together on a $2 billion infrastructure plan. “Instead of walking in happily to a meeting, I walk in to look at people who said I was doing a coverup,” Trump said, adding that he can’t work on infrastructure “under these circumstances.”

….Speaking to reporters shortly after Trump’s appearance in the Rose Garden, Pelosi and Schumer said they were taken aback by Trump’s behavior. “To watch what happened in the White House would make your jaw drop,” Schumer said.

Speaking for myself, I no longer have much of a jaw to drop after two years of watching Trump. In any case, this is obviously just a way to extricate himself from a bad situation and get in a little bit of victimization playacting while he’s at it. It deserves no attention.

UPDATE: I missed this from earlier in the day from Politico:

The White House is not going to present any plan to pay for rebuilding the nation’s roads and highways. Instead, the administration will ask Democrats to make the case for a $2 trillion package. The White House has identified roughly $1 trillion in spending cuts to pay for legislation — about as realistic a plan as saying this newsletter will fly you to the moon if you say abracadabra.

And this from the New York Times:

President Trump effectively blew up negotiations with Democratic leaders over a plan to rebuild the nation’s highways, airports and other infrastructure on Tuesday night, insisting that they put the idea aside until Congress approves a new trade pact with Mexico and Canada.

So now we have three different excuses for ditching the infrastructure plan: Democrats are mean; Democrats need to figure out how to pay for it; and Democrats need to pass the trade deal first. Needless to say, all of these are made up from whole cloth. The real reason is that Republicans have no interest in paying for Trump’s plan, but he didn’t bother checking with them first before he proposed it.