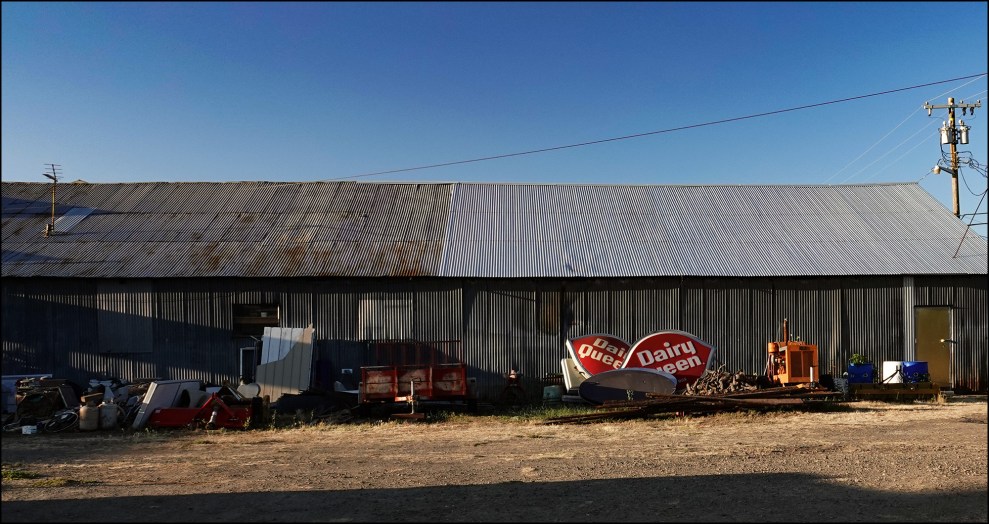 The remains of a Dairy Queen in Gridley, California.Kevin Drum

Elizabeth Warren on the economy:

Speaking with reporters, after acknowledging the overall numbers are “great,” she said: “But they don’t reflect the experience of most Americans. Go around a room like this and for most people wages haven’t gone up in a generation. And yet the cost of housing, the cost of health care, the cost of child care, the cost of sending kids to college has all gone through the roof.”

So is this true? It’s almost impossible to say with any certainty because Warren is talking about the lived experience of her audience. But what is that lived experience?

Let’s start with some simple charts showing how much stuff costs. Take health care. We’re all so accustomed to health care costs going up that it’s not widely understood that costs have settled down a lot over the past decade. Here is per-capita out-of-pocket spending on health care:

OOP has been flat since 2005—and not because people are putting off care. According to Peterson-Kaiser, only 8 percent of people report delaying needed care, down from 9.1 percent in 2005.

So why does it seem as if health care costs are increasing? Part of the answer is inertia: we’ve heard so often that health care costs are rising that we simply assume it regardless of what we’re actually spending. Part of the answer is bad memory: we don’t easily recall what we paid for health care ten years ago. We just know that it seems like a lot right now. Part of it is that we’re buying more than we used to: household expenditures on health care have gone up about 30 percent over the past few years. And part of it is inflation amnesia: OOP spending is actually up by about a third since 2005, and that’s what people see. They don’t realize that this is almost all due to inflation, which means there’s been no real rise.

We’ll come back to all that. First, a few more charts. Here are the prices of various items since 2000:

Tuition has skyrocketed for sure. Child care and health care are up moderately. But everything else is down. Now let’s zoom in on the past few years. Here are blue-collar wages:¹

That’s not a huge increase, but it’s an increase. And here’s the inflation rate of various items since 2014:

Relative to wages, almost nothing is up. Even tuition is only up 2.1 percent, and everything else is either flat or down. But this is not how it seems to most people. Why?

There are all the things we discussed above, of course: inertia, bad memory, and inflation amnesia. But there’s also the fact that all of these wonderfully declining price indexes are calculated using “hedonic adjustment.” I mentioned this a couple of weeks ago: it’s the notion that if we’re paying the same price for a better product, then prices have effectively gone down. The price of computers, for example, hasn’t literally gone down 95 percent since 2000. They’ve probably gone down by about half, but we’re getting a whole lot more computer for that money. Roughly speaking, the BLS figures that a 2000-era computer (Pentium III, 32 MB RAM, 4GB hard disk, dial-up internet, etc.) that cost $1,000 back then would cost about 50 bucks these days if anyone bothered to make it. That’s where the 95 percent decrease comes from.

But that’s not our lived experience. Our lived experience is that computers cost less, but only somewhat less. It rarely occurs to us how much more we’re getting for that money. Likewise, cars “officially” cost about half of what they did a few decades ago, but in actual cash terms (adjusted for inflation) we pay about the same. We’re getting a lot more, but much of it we never notice (airbags) and the rest becomes standard so quickly we hardly remember there was a time we didn’t have it (nav systems). The bottom line is that although lots of prices really have declined, not all of the decline shows up in the price tag of common items we buy.

All of this has a connection with the urban-rural divide that I wrote about over the weekend: economically, it turns out, things aren’t really that bad in rural areas. The evidence suggests that on average rural areas aren’t struggling economically any more than cities are, and I think we should accept this. At the same time, there are other things that have nothing to with income and prices per se:

This is not a statistical artifact. pic.twitter.com/36YQpASqCk

Infrastructure: like living with early-to-mid 20th century ghosts. I grew up rural (age 0-18). Dilapidated train trestles, abandoned railstops (e.g., Minersville), the aforementioned ore docks, etc. But also highways: people compare local 2-lane, 55 mph infrastructure to larger freeways near Duluth/Superior, Madison, and Milwaukee….That’s Ashland County. My dad and his brother inherited a dairy farm and eventually gave it up. I moved to California in 2000. Some people still farm, but it’s been in decline.

This is all part of the lived experience in rural areas. It may well be that these places are doing better than we think strictly on a dollars-and-cents basis, but the subjective experience of living in a rural area is often genuinely depressing. Some of this is an illusion, but some of it is quite real—and that’s without even getting into cultural issues, where rural folks feel like they’re being overwhelmed by liberal city values and have no real chance to fight back. This too is something of an illusion—much of it ginned up by Fox News—but again, some of it is also quite real.

In a purely technical sense, then, I think Warren is wrong. It’s true that wages haven’t grown much, and that’s a big problem. But it’s not true that our standard of living has declined, even in rural areas. Taking everything into account, not just health care and child care, we get more for our hourly wages today than we did 20 years ago. But in a more subjective sense, Warren is right. The working and middle classes in small towns watch the lives of the top ten percent and see them getting more distant all the time. They can accept that millionaires live cushy lives—haven’t they always?—but now even the urban upper middle class seems to live in a bubble in which the problems of mere mortals barely exist. And it’s a bubble they have no hope of ever getting close to.

This is why growing income inequality is so corrosive. There’s always been friction between urban and rural communities. But especially in an era where TV and social media make the divide palpable to everyone, it can seem to rural residents as if America’s cities aren’t merely a little richer, but are practically a different country.

That’s wrong, of course, because it focuses too much on only a small sliver of urban life. Rural folks aren’t seeing what it’s like in big cities for the working class. That doesn’t show up much on TV or social media. Nor do they see much of the urban poor unless they’ve been glammed up for an action movie. And even if they did, maybe it wouldn’t matter. The black and brown urban poor probably seem as different from their rural white poor as the urban upper middle class does to the rural middle class.

Long story short, rural areas are actually doing OK but it sure doesn’t always seem like it. That’s because their problems aren’t mostly about money. It’s much more complicated than that.