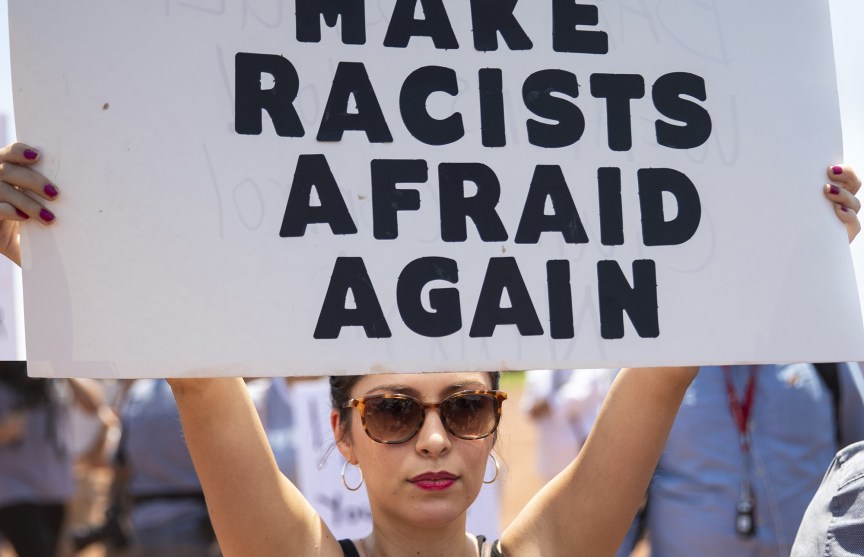 The Washington Post has a headline today that makes you go hmmm:

I think we all have a pretty good idea of how Trump could avoid being called a racist. He could stop saying racist stuff all the time. Easy peasy.

For my money, I probably wouldn’t call Trump a racist and I definitely wouldn’t call him a white supremacist. I’d call him a race-baiter. I know I’m out of sync with leftist orthodoxy on this, but words and phrases have actual meanings and I think language works better when we respect their differences:

Trump is a race-baiter. But is he personally racist? Beats me, and I almost don’t care anyway since I think a race-baiter is generally worse than a racist. Racism comes in various degrees, but sometimes it’s just the result of upbringing and expresses itself as little more than a casual, personal, low-level hostility. Race-baiting, by contrast, is invariably cold-blooded and mass-focused almost by definition. It’s cynical and selfish and demonstrates a willingness to stoke hatred for little more than short-term personal gain.

Genuine white supremacists are thin on the ground these days and don’t wield any serious political power. Racists come in all stripes, but their power has been dwindling for decades and their attitudes have largely been driven out of the public square. They’re still dangerous but getting less so—and that trend will continue as long as political elites make racism publicly intolerable. The only thing that can change this is a resurgence of race-baiting, and that makes race-baiters the most dangerous of them all. Fox News is far worse than their viewers and Donald Trump is far worse than his base.

Those are the people to fight, not the yahoos who yell “Send them back!” at Trump rallies. Without Trump, they’d just be sitting at home and occasionally telling off-color jokes to their buddies. It’s only with people like Trump around that they become toxic.