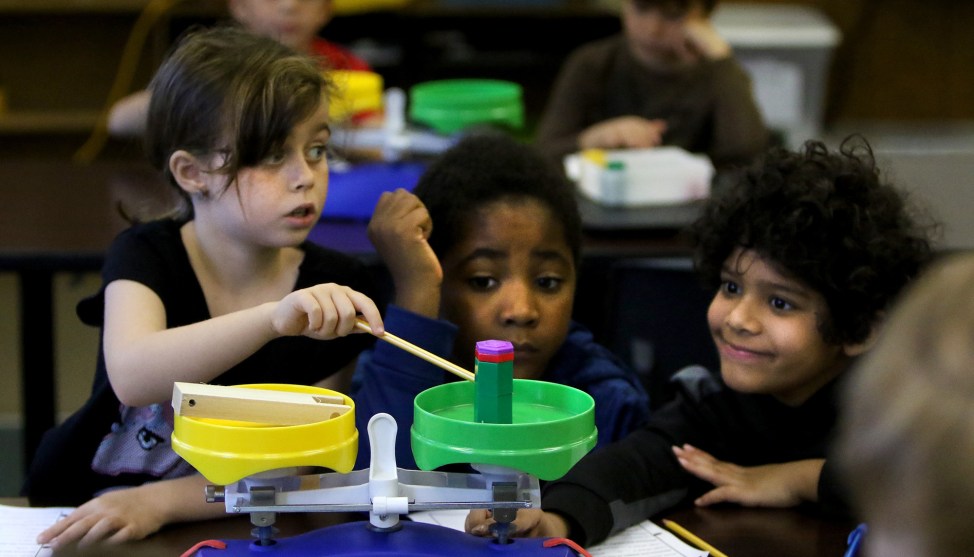 New York City has a problem. It sponsors lots of selective classes for gifted children, but these classes are predominantly white and Asian, with very few black and Hispanic students. There are lots of things you could say about this state of affairs, but I really don’t think this is the answer:

A high-level panel appointed by Mayor Bill de Blasio is recommending that the city do away with most of these selective programs in an effort to desegregate the system, which has 1.1 million students and is by far the largest in the country.

….The plan includes all elementary school gifted programs, screened middle schools and some high schools — with the exception of Stuyvesant High School and the city’s seven other elite high schools, whose admission is partially controlled by Albany. Gifted programs and screened schools have “become proxies for separating students who can and should have opportunities to learn together,” the panel, made up of several dozen education experts, wrote in the report.

Ever since they’ve existed, gifted programs have provoked opposition from people who consider them elitist. So in a sense this is nothing new.

But what is new is the reasoning behind this recommendation: black and Hispanic kids perform persistently and embarrassingly worse in school than white and Asian kids, so let’s fix this awkward situation once and for all by pretending it doesn’t exist. I can hardly think of a better way to make sure the testing gap is never addressed.¹ The problem is that this head-in-the-sand approach won’t work forever. Eventually—in eighth grade, in high school, in college, or out in the real world—it won’t be possible to hide that gap anymore. And we will have failed yet another generation of children.

I’m biased because I attended a gifted program starting in 4th grade and my mother taught gifted kids for more than 20 years. I know what they can do. And there are reforms that sound like good ideas to me. For example, starting gifted programs in first grade based on tests taken in kindergarten strikes me as ridiculous. And I also favor changes that rely somewhat less on testing and somewhat more on other factors that guarantee a minimum level of participation from every geographic area. But eliminating the entire program because it exposes something that embarrasses us—something that should embarrass us—is the worst possible response.

¹Not that we’re doing a bang-up job now even though we do know about it. I’ll grant you that.