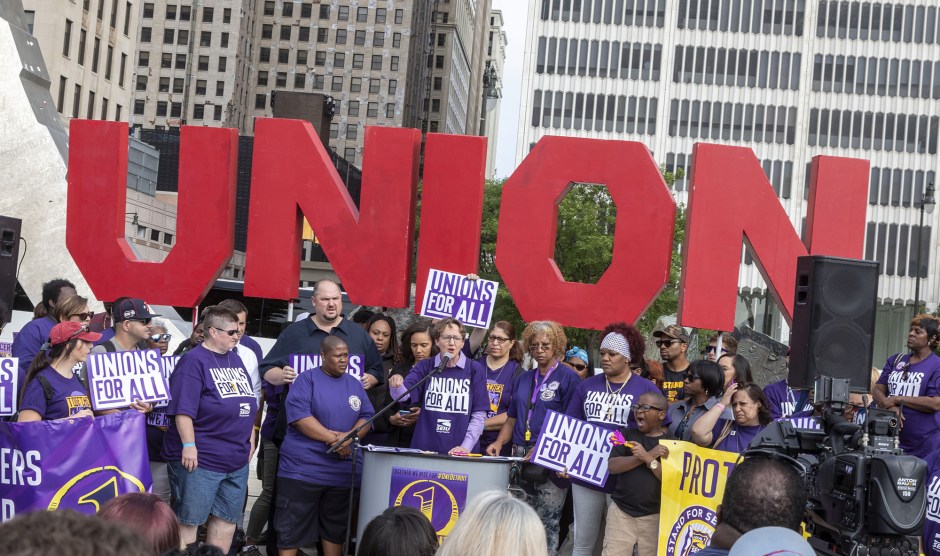 Back in 2016, North America’s Building Trades Unions endorsed Hillary Clinton for president. Once Donald Trump won, however, they responded warmly to his promise to be the Builder-in-Chief. Trump told them he planned to spend $1 trillion on infrastructure. Maybe $2 trillion! Here is Trump speaking to the group early in his presidency:

…..The fact is you take pride in every part of your work — every joist, bolt, and rivet. You’re not only builders, but you’re artisans, very talented people. A lot of people don’t understand, you’re very talented people — enriching our cities and landscapes with works of great beauty. And just as you take pride in your work, our nation takes great, great pride in you, believe me. And it’s time that we give you the level playing field you deserve.

….Washington and Wall Street have done very, very well for themselves. Now it’s your turn. And you’re going to be also sharing the wealth.

As we all know, the whole infrastructure thing never happened. Hell, it became the butt of a joke. Then the Trump administration proposed new rules for apprenticeship programs that would be governed by industry, not unions. NABTU’s president, in an inspiring display of worker solidarity, said that would be fine as long as NABTU was excluded from the proposal. Labor Secretary Alex Acosta assured him it would be.

Well, as we all know, Acosta was forced out of office due to Epstein program related activities, and his chief-of-staff was already gone due to his management philosophy of “profanity-laced tirades and belittlement of subordinates.” So now Mick Mulvaney is running the show and he’s not the kind of guy who’s sympathetic to carve-outs for organized labor. They are the enemy, after all. So now, two years later, NABTU’S partnerhip is in tatters:

Now the two sides are on the brink of war, endangering a key bloc of Trump’s support in Midwestern swing states in 2020. At issue is a deal gone bad between Trump and North America’s Building Trades Unions over a Labor Department apprenticeship initiative, the politics of which have grown more complicated since last month’s ouster of Secretary Alexander Acosta. Leaders of the union federation worry that the final version will undermine their own job-training programs and create a supply of cheap labor for developers, undercutting high-skilled construction workers who rely on prevailing-wage jobs to make ends meet.

“It’s an existential threat to the Building Trades,” said a former administration official with knowledge of the discussions. And it has the powerful group — a union federation that represents millions of construction workers across the U.S. — seeing early signs of a member-driven revolt against Trump in 2020.

I know this analogy gets used too often, but it really is like the frog who agreed to carry a scorpion across a river. Halfway across, the scorpion stung the frog and they both drowned. But why? “It’s what I do,” the scorpion shrugged.

Donald Trump may have the knack of talking to blue-collar workers, and I suppose union leaders need to do their best to work with whoever’s in the White House. But as Trump said to them about unions, “they cost me a lot of money.” That part was real. The little laugh that followed wasn’t. Unions cost Trump and the rest of the business class a lot of money, and they’ve spent the last 50 years conducting a scorched-earth campaign to destroy them. So when, one way or another, it turned out there was no Trump infrastructure bill and never would be; and Trump started whittling away at public sector union rights; and Trump repealed the “overtime” rule put in place by President Obama; and Trump’s NLRB overturned a couple of key labor rules; and Trump appointed Eugene Scalia to be the next Labor Secretary; and Trump said not a peep when Boeing workers tried to organize in South Carolina; and Trump’s trade war started hurting union jobs—well, you’d be foolish to wonder why he did all that. The answer is simple. He’s a Republican. It’s what he does.

Any union that supports Trump’s White House and Mitch McConnell’s Senate deserves whatever they get. Any union that backs a Trump initiative that screws other unions as long as they themselves are exempted should hardly be surprised when that exemption is suddenly in danger.

Organized labor is down for the count in America. The odds against their revival are daunting, but they do have one last chance: organize for 2020 like never before. Make it clear that social issues don’t matter anymore and that every single union member in the country should vote against the Republican Party for every office that’s open. Do this regardless of what happens to the apprenticeship program. In turn, Democrats should unanimously agree to put labor reform front and center if they win. That’s it. It’s a prick of light at the end of the tunnel for unions and a return to genuine blue-collar roots for the Democratic Party.

So far, to my surprise, none of the Democratic candidates has sold herself as the “labor president.” They mostly all support the usual stuff (card check, worker safety, etc.) but it’s been pretty low-key. The “can you top this” approach to border security that’s swept the field is a bad idea, but a “can you top this” approach to reviving labor would be great. I mean, whose side are you on?