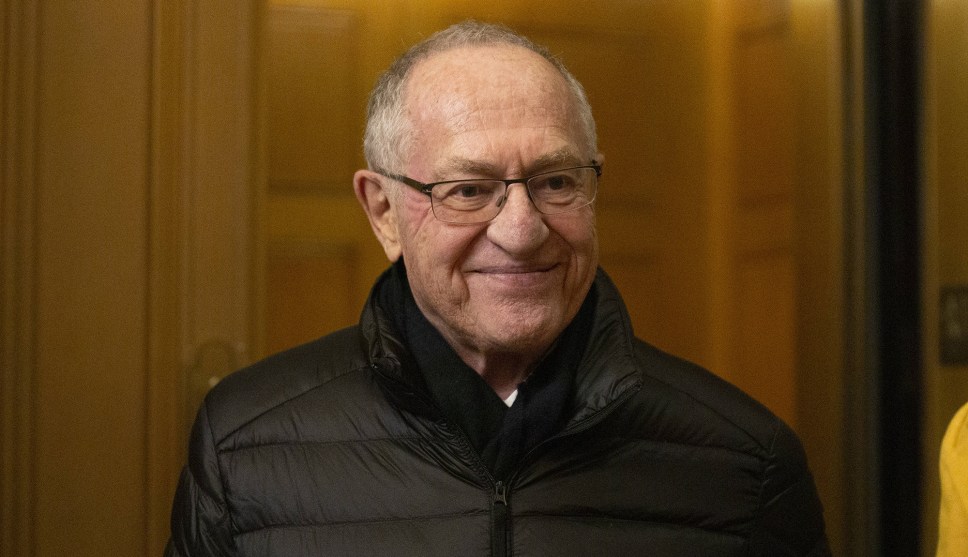 For God's sake, will you *please* just shut up?Stefani Reynolds/CNP via ZUMA

A friend writes to me this morning: “A lot of folks on the left are mischaracterizing Dershowitz’s argument, which they don’t need to do — it’s awful enough already.”

Crap. Does this mean I have to figure out what Dershowitz said and then decide if he’s been misquoted? For a wacko has-been, he sure does know how to keep the spotlight on himself, doesn’t he? But I guess with a wacko has-been in the White House, it’s good times for these guys. Anyway, here is Politico’s summary:

Responding to a question about how presidents conduct foreign policy, Dershowitz asserted Wednesday that “every public official that I know believes that his election is in the public interest.” Therefore, he continued, “if a president did something that he believes will help him get elected — in the public interest — that cannot be the kind of quid pro quo that results in impeachment.”

But tweeting Thursday, Dershowitz insisted that he “did not say or imply that a candidate could do anything to reassure his reelection, only that seeking help in an election is not necessarily corrupt.” Concluding his string of posts, he wrote: “Critics have an obligation to respond to what I said, not to create straw men to attack.”

Well . . . “cannot be the kind of quid pro quo that results in impeachment” is strong language. I’m hardly surprised it got interpreted the way it did. Still, I guess Dersh is just making the same argument that I’ve made several times myself, namely that presidents do stuff all the time with one eye on their reelection. Should I establish diplomatic relations with Cuba? Should I keep troops in Iraq? Should I take a chance on killing Osama bin Laden? These are all legitimate foreign policy issues, and they’ll inevitably be viewed favorably by some voters and not by others. Presidents can hardly be unaware of this, and as Dershowitz says, making a decision that will be good for reelection isn’t necessarily corrupt.

But applying this to the Ukraine matter is just willfull distortion. This wasn’t a common issue of, say, “What will voters think of getting tough on aid to Ukraine?” In fact, Trump very much hoped that voters would never even learn what he was doing. Hell, it wouldn’t have worked if voters knew he was behind it.

No, this was a secret decision to defy the will of Congress and then lie to them about it, all in return for a foreign leader agreeing to lie in a very explicit way about a single campaign opponent. In Dershowitz’s list of presidential motivations (national interest, corruption, or some mix of the two) this was pure corruption. There was zero national interest involved in Ukraine announcing an investigation of Burisma Holdings. It’s possible that Trump himself didn’t understand that, but only because his narcissism is so off the charts that he literally conflates “good for Trump” with “good for the country.” That’s how his company worked, after all. The rest of us, however, understand that this is a ridiculous standard.

Now can we stop talking about Alan Dershowitz? Come on, folks.