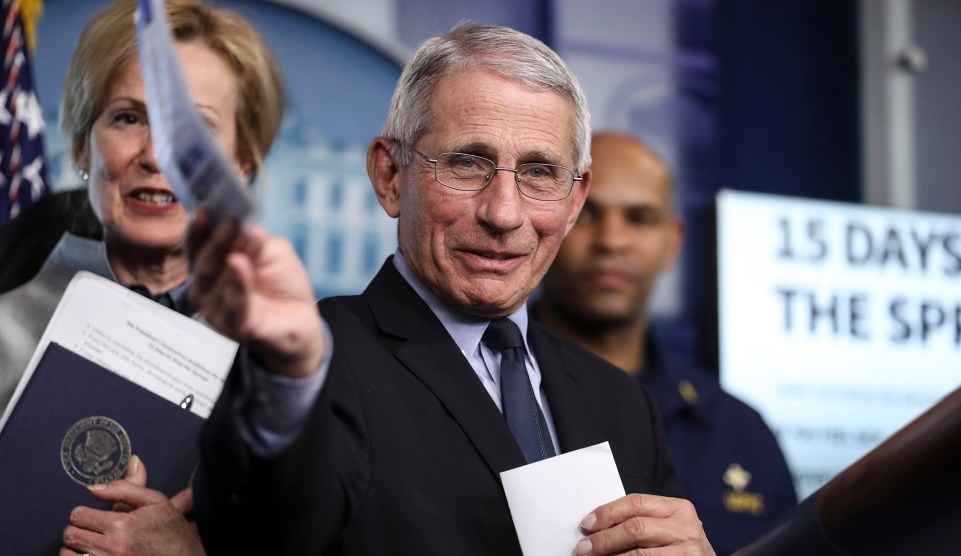 The Washington Post informs us today that Anthony Fauci is everyone’s favorite doctor, the “grandfatherly captain of the corona­virus crisis” who not only has limitless energy to appear everywhere at once but has even performed the miracle of ending political polarization:

Now a public-health catastrophe has remade our reality and pushed Fauci into the spotlight as a figure that might have seemed impossible less than a month ago: a government expert with an unwelcome message who is nonetheless regarded as a truth-teller, if not a godsend, by the president, Democratic leaders and media figures alike. Surviving may require a single set of facts; and Fauci — a slight, bespectacled man with a Brooklyn accent and sympathetic eyebrows — has them.

Hmmm. On Friday Fauci appeared with President Trump and was asked about Trump’s latest infatuation:

Q And to Dr. Fauci, if I could. Dr. Fauci — this was explained yesterday — there has been some promise with hydroxychloroquine as potential therapy for people who are infected with coronavirus. Is there any evidence to suggest that, as with malaria, it might be used as a prophylaxis against COVID-19?

Trump then spent the next ten minutes in a back-and-forth with reporters extolling the virtues of hydroxychloroquine and arguing that he felt really, really good about its potential. And people should listen, because he’s a smart guy. It ended with this final follow-up to Fauci:

Q I would like Dr. Fauci, if you don’t mind, to follow up on what the President is saying. Should Americans have hope in this drug right now? . . .

DR. FAUCI: No, there really isn’t that much of a difference in many respects with what we’re saying. The President feels optimistic about something — his feeling about it. What I’m saying is that it might — it might be effective. I’m not saying that it isn’t. It might be effective. But as a scientist, as we’re getting it out there, we need to do it in a way as — while we are making it available for people who might want the hope that it might work, you’re also collecting data that will ultimately show that it is truly effective and safe under the conditions of COVID-19. So there really isn’t difference. It’s just a question of how one feels about it.

Am I the only one who’s noticed that Fauci does this a lot? Obviously he has a tightrope to walk with Trump, and I shudder to think what he has to do to stay in Trump’s good graces. But that doesn’t make him a truth-teller. It just makes him a fairly ordinary politician. It’s obvious what he really thinks, after all: hydroxychloroquine is nonsense, period. But by the time the press conference had moved on, he was basically saying that Trump was right, the stuff might work, and it’s all a matter of how one “feels” about it. Trump could say today that Fauci agrees with him about hydroxychloroquine and he wouldn’t really be stretching things much.

So is this truth-telling? Not so much. Here’s another excerpt from the Post story. It’s from the mid-80s, when Fauci was focused on finding cures for AIDS and hosted regular dinner parties for activists:

As the activists drove down from New York, they would remind one another to be firm and focused with their demands and to be careful not to fall fully into the Tony Fauci charm vortex, according to Peter Staley, an activist with a New York-based group named ACT UP.

….The activists were aware that the dinner parties were as strategic as they were friendly, he says, and afterward they would try to sort out when Fauci had been handling them and what details he’d been carefully hedging on. “We knew he was playing a game of ingratiating, which he has done with every president that he has worked under. He’s incredibly skillful at it.”