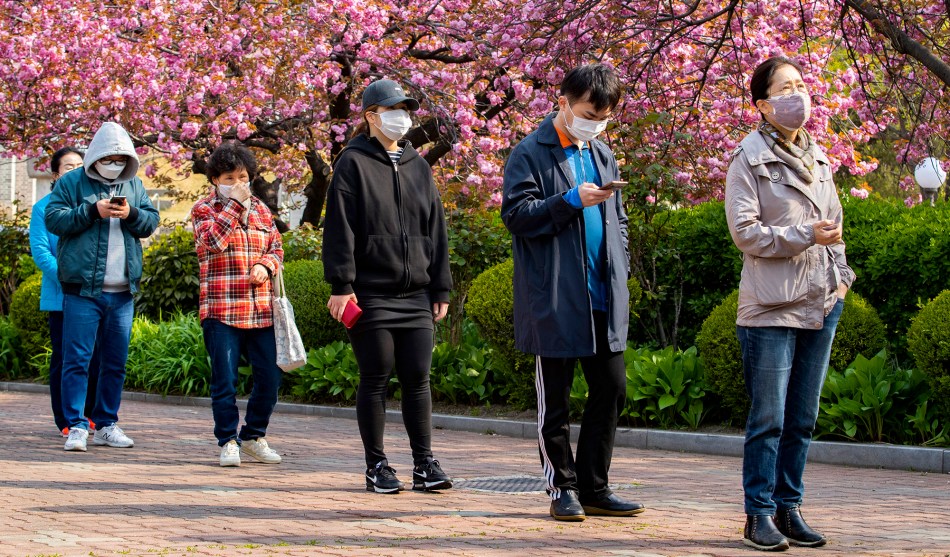 South Korea is having an election today, and everyone is well prepared.Xinhua via ZUMA

Since I mentioned the South Korean model earlier this morning, let’s take a closer look at it. First off, it’s been successful at reining in the coronavirus:

And it has done so without locking down entire cities or taking some of the other authoritarian measures that helped China bring its epidemic under control. “South Korea is a democratic republic, we feel a lockdown is not a reasonable choice,” says Kim Woo-Joo, an infectious disease specialist at Korea University.

Aggressive testing has been the key to their approach:

South Korea’s foreign minister, Kang Kyung-wha, speaking to the BBC last week, said the key lessons from her country are that it developed testing for the virus even before it had a significant number of cases. “In mid-January, our health authorities quickly conferred with the research institutions here [to develop a test],” Kang said. “And then they shared that result with the pharmaceutical companies, who then produced the reagent [chemical] and the equipment needed for the testing.”

So when members of a religious sect in Daegu started getting sick in February, South Korea was able to rapidly confirm that it was COVID-19. “Testing is central” to the outbreak response, said Kang, “because that leads to early detection. It minimizes further spread.” And it allows health authorities to quickly isolate and treat those found with the virus.

But there’s more to it than that:

Relentless public messaging urges South Koreans to seek testing if they or someone they know develop symptoms. Visitors from abroad are required to download a smartphone app that guides them through self-checks for symptoms. Offices, hotels and other large buildings often use thermal image cameras to identify people with fevers. Many restaurants check customers’ temperatures before accepting them.

….As the coronavirus outbreak grew too big to track patients so intensively, officials relied more on mass messaging. South Koreans’ cellphones vibrate with emergency alerts whenever new cases are discovered in their districts. Websites and smartphone apps detail hour-by-hour, sometimes minute-by-minute, timelines of infected people’s travel — which buses they took, when and where they got on and off, even whether they were wearing masks.

And it’s worth noting that South Korea has locked down to some degree:

Schools and other public institutions have temporarily closed, as have, more recently, crowded businesses, such as gyms. Still, the cafés are busy, the streets and parks are peopled with members—albeit masked ones—of every generation, the stores have plenty of toilet paper, and never has it been easier to get a seat on the subway. Suddenly I feel, despite the virus—or, indeed, because of it—like I’m living a Korean Dream.

It’s too late for us to adopt the South Korean model, but it’s something to look toward after we’ve managed to get our case numbers under control.

And FWIW, the examples of South Korea and Sweden make me wonder: what if we adopted our general lockdown practices, along with universal mask wearing, except for restaurants? That would save a lot of restaurants, of course, and it would also ease the lockdown immensely if people could still meet their friends for lunch and dinner. And both South Korea and Sweden seem to be doing OK even with their restaurants still open.