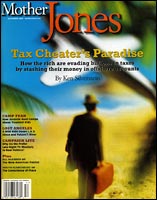 Features
Trillion-Dollar Hideaway
by Ken Silverstein
Welcome to the tax-free tropics, where wealthy Americans — including many made rich by the stock market boom — have found a sunny place to stash their cash to avoid the IRS.

The Same River Twice
by Bill Donahue
A kayak journey down the Los Angeles River finds miles of concrete, great blue herons, and an ambitious vision for turning this flood control chute back into a river.

The Healing Game
photo essay by Tim Hetherington
text by Bill Berkeley
Liberia’s child veterans have lived through — and participated in — one of the decade’s most brutal civil wars. But on the soccer field, the former combatants are finding a measure of normalcy.

The Conscience of Place: Sand Creek
by Verlyn Kinkenborg
In the first of a series on forgotten places that stirred the American conscience, the author revisits the site fo teh Sand Creek Massacre, where in 1864 the Colorado Cavalry staged a savage attack on a peaceful Indian village.

Camp Fear
by Bruce Selcraig
Politicians nationwide tout boot camps as a tough-love solution to juvenile crime. But abuses — and a death — at camps in South Dakota have raised serious concerns about programs that treat kids like military recruits.

Power Plays: The New Political Theater
by Paul Taylor
Late-night comedy: where more Americans get their politics than any other source

The Commons
by Sue Halpern
A new federal initiative is supposed to stop road construction in large national forests. So why does it exempt the biggest one?