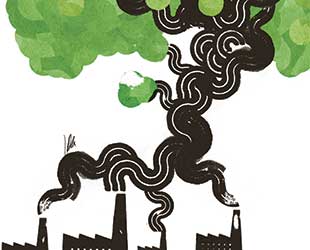 Global warming. Foreign oil. Bank meltdowns. Here’s how to tackle them all at once.

As a public service, Mother Jones, which is a nonprofit magazine, will release the full contents of this issue online over the next several weeks. If you’d like your Mother Jones sooner—and you want to support independent investigative journalism—please subscribe now.

OUTFRONT
Bush’s bureaucrats burrow in; Monica Goodling’s search for “good Americans”; is the oil shortage a scam?; Rudolph the stranded reindeer; can the water whisperer end drought forever?; sneaky ways to block the vote; why tax shelters are cozier than ever; how green is your team?

WITNESS
After Math
By Robin Mejia
When public health researcher Les Roberts set out to count Iraq’s dead, the last thing he expected was a math war.

PRACTICAL VALUES
O Say Can You Buy?
By Nicole McClelland
I bought American for a week and all I got was this lousy tank top.

Can We Save the Planet and Rescue the Economy at the Same Time?
By Al Gore
We put a man on the moon, didn’t we?

The Seven Deadly Deficits
By Joseph E. Stiglitz
What the Bush years really cost us

The Most Important Number on Earth
By Bill McKibben
Is it too late to escape the greenhouse danger zone?

PLUS:  Cutting CO2 for fun and profit

Diet for a Warm Planet
By Julia Whitty
Watch your extra carbon melt away!

The Truth About Green Jobs
By David Roberts
When are they coming? Who gets them? Are they really outsourcing-proof?

What About the Dirty Jobs?
By Chris Lehmann
Stop condescending to the brown-collar crowd.

Losing Focus
By Fara Warner
How Ford went into the ditch

Out of the Woods
By Josh Harkinson
Lumberjacks and tree sitters, together at last

The Great Persuader
By Kevin Drum
Can Obama walk his talk?

PLUS:  Cleaning up the House

Gas drilling in western Colorado makes the water foul and the locals angry.