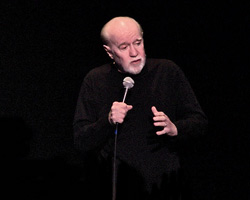 George Carlin wanted to be Danny Kaye when he grew up. Instead, his straight-arrow career was hijacked by the counterculture, and he became the angry voice of a generation. Today, he laments that generation’s loss of idealism, but he does so driving a BMW and luxuriating in his private flotation tank, which he calls “Our Lady of Good Salt.” After decades of misanthropic stand-up, Carlin promises that a newfound grace infuses his book Brain Droppings, which Hyperion is publishing this spring. “There’s a surprising amount of innocence and sweetness in it,” he says. And even though he excoriated Mickey Mouse when the “imaginary rodent’s” 65th birthday became a news item, the comedian wants you to celebrate when he turns 60 in May.

Q: Let me read you something from your own act: “I hope Mickey dies. I do. I hope he goddamn dies. I hope he gets ahold of some tainted cheese…”

A: “…and dies lonely and forgotten behind the baseboard of a soiled bathroom in a poor neighborhood with his hand in Goofy’s pants.”

Q: What did Mickey Mouse ever do to you?

A: That’s not how these things generate themselves. What Mickey Mouse did to me was to represent something — in this case, meaningless shit on the news, the way they fill our minds with all this stuff to distract us from the real tragedy. He’s a symbolic figure.

Q: This spring marks your 20th year on HBO, your 40th year in show business, and your 60th year on the planet. What makes your birthday different from Mickey Mouse’s?

A: I hope they don’t ever use my birthday as a news item. That would be one distinction. I would also hope to tell people I’m 60 because it’s a nice human fact for a guy like me to make it all the way to 60.

Q: Do you exercise?

A: I use a treadmill because I’ve had three heart attacks. My father died at 57. His first symptom of heart trouble was a trip to St. Raymond’s Cemetery.

Q: Do you have any of the appliances or equipment that you make fun of in your comedy routines: camcorders, pasta makers…?

A: I have no pasta maker. I probably have a device at home that would take pictures of moving images and would pass for a camcorder, but I don’t know where it is.

Q: What rating will your upcoming HBO special get?

A: Under the new rating system? I don’t know all the terminology of that system yet.

Q: Has censorship gotten stronger or weaker during your years in the business?

A: I think the trend to control speech — and therefore thought — continues. Because of the freer flow of information now, there’s more on the side of free thought.

A: …This is rhetoric. Rhetoric paints with a broad brush. I try to find targets I feel something about and express it my way, so it’s usually overdone.

Q: But aren’t boomers the main audience for HBO?

A: Baby boomers helped me a great deal in my career. They launched me. They were there for me to sing my song to. And I’m not saying I’m better than anyone, but I think they turned that anti-authority baby boom mentality into their own enemy. Now I identify very closely with their children.

A: The two big mistakes were the belief in a sky god — that there’s a man in the sky with 10 things he doesn’t want you to do and you’ll burn for a long time if you do them — and private property, which I think is at the core of our failure as a species. That’s the source of my indignations, my dissatisfactions, however it comes out on the stage. I feel betrayed by the people I’m part of, these creatures, these magnificent creatures.

A: I love individuals. I think people are terrific as I meet and get to know them. I like imagination. I like the freedom that this society manages to parcel out to us in the midst of the rest of what they do to you. I also like thinking about the fact that the atoms in me are the same atoms that are in all the rest of the universe, and that every one of those atoms came from the middle of a star. In other words, it’s only me out there.

We use up words like “spiritual” so fast in this culture. Twenty years ago “spiritual” had a distinct meaning. But now there’s a lot of jack-off thinkers who just love to talk about the spiritual. And there is a lot of bogus — is “bogosity” a word? It should be — a lot of bogosity in these spiritual seekers. So you have to find another way to express it. I just call it “how I fit.”

Q: Speaking of how you fit, where do you fit on the political spectrum?

A: If the center line is really there, and I were anywhere, I would come down on the left of center.

Q: Right there with Bill Clinton.

A: I like Bill, by the way. If there were only one cherry pie in the world, and Bill Clinton owned it, I might get a piece of it. If Bush or Reagan owned it, you’d have to kill them to get a piece of pie. That’s my feeling about Bill. And Bill’s a good bullshitter. America likes a good bullshitter. That’s one of the reasons he was re-elected. Honesty has no place in politics. It would throw everything off.

Q: You don’t vote now. When was the last time you voted?

A: That probably would have been it. And that would have been one of the few lines I voted on. I’m on the left because I think there’s a little more attention to human needs than to property rights. But I don’t think much of political activism. It’s so shortsighted. Most people are interested in their own personal comfort. I’ve said that about environmentalists — I think they care about bike paths and places to park their Volvos, not the planet as an abstraction.

Q: But you have no particular love for the planet. You’ve wished disasters upon it.

A: When you look at it from that one picture, the one from space, it’s really a rather attractive thing. I have nothing against the planet per se. I root for the big comet or asteroid as a way of cleansing the planet. The comet or asteroid 65 million years ago is probably what gave us our opening to replace the reptiles. The greatest entertainment I have in my life is chronicling internally, not necessarily for the public, the slow dissolution of order.

Q: You must love the blowing up of buildings for entertainment in Las Vegas.

Q: How is Vegas different from a concert hall for a performance?

A: In Las Vegas, people are there for other reasons, and you are a sideline, an attraction, an “also.” So you don’t get all hard-core fans. Secondly, when you have tables and drinks and a seating arrangement, people are on their guard a little more. They will not reveal as much about themselves in those settings as they will in the darkness of a theater facing front. Laughter reveals a lot about you. It’s voting in a way. So I’d say I skim off about 10 percent of the venom or 10 percent of the attack stuff on things people hold dear.

Q: Does Mickey Mouse get skimmed off?

A: No, just religion and overt attacks on people’s political affiliations. I don’t use the word “Republican,” for example, though I say a lot about conservatives. There’s something about the word “conservative” that gives people a little more freedom to join you if they want.

A: Well, editing. It’s accommodating the reality of the world.

Q: Do you really care if they “balance the stupid fucking budget”?

A: I don’t care much about the outcome. I’d like for people to feel better and have better lives, but I don’t think that’s in the cards through political action. I think bloodshed is still the way you get dramatic change. That’ll never happen because they’ve got all the guns now. At least they’ve got the nice guns, the big ones, the ones with night vision.

A: I’ve said to myself — I don’t think I’ve said it to anyone else — that but for the racism and religious orientation of these militiamen, I very much like the spirit involved there. Those are two points that would stop me. Boy, do they hate “Jews and niggers” — that’s the way they say it, right? And they very much think Jesus has got a pretty good thing coming up soon. The end times, the tribulation…what’s the other word?

A: The apocalypse, that’s even better, but there’s another one. The rapture! That sounds like fun.

Q: Are you lonely?

A: There is a core of loneliness. It’s partly existential. Secondly, I was raised a loner. My parents were not there. My father was asked to leave because he couldn’t metabolize ethanol. Actually, my mother ran away with us when I was 2 months old and my brother was 5. Real dramatic stuff: down the fire escape, through backyards.

So, I sort of raised myself. I was alone a lot and I invented myself — I lived through the radio and through my imagination.

One of the interesting things about “outsidership” is that underneath it there’s a longing to belong. I just wish the thing I refused to belong to — the species, Western capital culture — was a little more respectable.

My one true relaxation is my flotation tank, in which I can either meditate or just drift off.

Q: Do you work in there?

A: No, that would defeat the whole idea.

Q: What was the bigger deal out of Dayton, the Bosnian peace accord or you meeting your wife, Brenda?

A: Ah, Brenda over Bosnia every time. These folks are wonderful, these peace people. The whole process of patching up these places that have thousand-year-old wounds….

Q: How have you and Brenda stuck together for more than 30 years?

A: There’s a lot of luck involved. Brenda and I got lucky the very first time and didn’t have to go through several spouses to do it. It’s a kind of complementary way of filling each other out and making each individual more complete. The key for us has always been to put the twosome ahead of either individual whenever that was an issue. That helps. And then, I don’t know, star-crossed something — it’s just magic.

Q: Fate? You believe in that?

A: I’m a believer that things happen. Fate is what happens.

Ricky Young is a reporter at the Orange County Register.