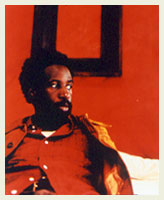 Actor, author, slam poet, hip-hop artist — Saul Williams just can’t sit while there’s art and revolution to be made. This son of a preacher man and a teacher woman rose to national prominence in 1998 as the star of the Sundance- and Cannes-acclaimed feature Slam, in which he played a jailed marijuana peddler who literally redeems himself through his rhymes. Williams followed up the film, credited by many with bringing spoken-word poetry from smoky urban cafés into the mainstream, with She, an expressive volume of written poetry about love, loss, and family.

Mother Jones: Is Amethyst Rock Star — you’ve got “Rock Star” in the title — a hip-hop album?

Saul Williams: I do think it’s a hip-hop album. I think that we’ve given ourselves a premature definition of hip-hop that inhibits our growth. I can look at Grandmaster Flash in the ’70s and something coming out of the U.K. in the ’90s and say it’s all hip-hop.

MJ: What makes it hip-hop?

SW: Well, that’s the question. We can say what makes it hip-hop is this black, urban [experience] da-da-da. But no! Hip-hop is no longer that. I mean, hip-hop has existed in Yugoslavia now for 10 years, has existed in France for 10 years, in Japan for at least 10 years — has existed where there are no African American experiences. So what is hip-hop? Well, with Public Enemy and KRS-ONE, hip-hop became the language of youth rebellion. But now, commercial hip-hop is not youth rebellion, not when the heroes of hip-hop like Puffy are taking pictures with Donald Trump and the heroes of capitalism — you know that’s not rebellion. That’s not “the street” — that’s Wall Street.

MJ: You take the sellout of hip-hop very personally.

SW: I have a very family-like connection to hip-hop, which is why it frustrates me so much. It used to be the thing that inspired me toward new self-definitions. And now I listen to hip-hop and think, “That’s not me. That does not inspire me. That’s not what I want to be.” It also hurts because I have kids, you know, and the fact they’re listening to some shit that is not feeding them. And I was fed by the music I listened to as a kid. Hip-hop fed me psychologically, spiritually, politically. I learned from that music.

MJ: Are you trying to re-create the music of your youth?

SW: What I’m aiming to do within hip-hop is to point out that the music itself is powerful; it reaches so many people. Through Public Enemy we learned that when the idea of self-empowerment is connected to music, it becomes the most powerful thing in the world. And it’s because of Public Enemy that there are hip-hop groups in all the countries I mentioned before. Remember: Public Enemy cannot be compared to Mos Def, The Roots, or any of that self-conscious, bohemian hip-hop. Public Enemy was hardcore — it’s what drug dealers listened to. Oppressed people across the world were like, “Wait, we’re gonna speak up through this art form, because it’s fucking powerful. In this way, we can just deliver speeches over beats.” And since we nod our heads to beats, that’s instant affirmation.

MJ: But your music isn’t about easy head nodding.

SW: I feel that people need to be jolted out of their comfort zones. The thing that I loved about the poetry scene was that people were gathering and saying, “You know what? I can think for myself.” And that’s what I’m doing in my music. You change the beat up, you might change the way people dance to the music. If you change the way they move, maybe they’ll think about it differently. I want to connect music to its highest power — which is heightening consciousness and affecting people’s reality. That can’t be done in normal ways, not according to my experience.

MJ: What’s the most representative track on this album?

SW: Probably “Our Father.” I sampled my father preaching at his church on Father’s Day ’99. I added music around it, and then I brought the band in. You can hear all the transitions, you hear what I did digitally, and then the band comes in playing live. That probably represents where I was when I first started doing the album.

MJ: I listen to your music and it’s kind of like oil and water, spoken word along with the hard music. I assume that you have to do a lot of explaining to a lot of people who don’t come from hip-hop.

SW: You’re right, I do. Even for people who do come from hip-hop — especially to people who come from hip-hop. But there’s also the whole racial thing of young black man, microphone. People look at me and say, “Oh yeah, I can see you’re influenced by the Last Poets and Gil Scott [Heron].” And I’m like, “Are you fucking forgetting Jim Morrison? Are you forgetting Allen Ginsberg?” Why can’t I be influenced by them too? The whole connection of poetry and hardcore music — listen to The Doors! It is no different than what I am doing. The fit is just as awkwardly beautiful. And it’s throwing people out of their comfort zones.

MJ: Paul Robeson features prominently in a lot of your work. What’s the fascination?

SW: [Laughs.] When I was young, I said I wanted to be an actor, and my father said, “Well, I’ll support you as an actor if you get a law degree.” My mother said, “You should do your next school report on Paul Robeson.” Between fifth grade and the end of college I probably did five reports on Paul Robeson! He paid his way through law school playing professional football, did the longest run of Othello on Broadway. Then when he’s singing “Ol’ Man River,” he realizes the effect that it has on people and he says, “I want to sing because that’s the most direct way to people’s hearts in affecting how they think.” And then he’s connecting to the working class across the world, so that during the Spanish Revolution in 1937 or 1938, they ask him to sing to the soldiers on the front line. He’s like, “Give me a gun and a uniform; I’ll march on the front lines and sing.” And he sings for three days and no shots are fired. The connection between his art and activism is everything that I’ve ever wanted to do.