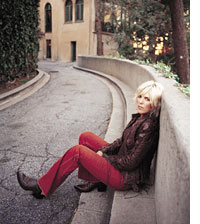 Mining her romantic foibles and rebellious soul since her 1979 debut, Lucinda Williams just keeps striking pay dirt. Her songs — ranging from country to blues to rock — are sexy and soulful, raw and world-weary all at once. A three-time Grammy winner, Williams was also recently named America’s Best Songwriter by Time magazine.

Williams comes by her literary bent organically; her father is the Southern poet Miller Williams, who read at President Clinton’s 1996 inauguration. And her poetic sensibility is in evidence throughout her latest album, World Without Tears. An hour of melancholic beauty, Tears relates yet more candid tales of heartbreak but also touches on more serious subjects including homelessness, child abuse, and the perils of organized religion.

The 50-year-old Williams is still in touch with her inner rock star: She likes her friends, blues, and booze and never has managed to settle down. Nor has she lost the idealism and nonconformism that she cultivated as a rabble-rouser in the 1960s. Williams speaks with the same thoughtful, plaintive tone she sings in, her accent a twangy if hard-to-pinpoint mélange that comes from having lived in New Orleans, Austin, Tennessee, and many points in between. She spoke to Mother Jones from her residence outside Los Angeles.

Lucinda Williams: I’m renting a furnished house month to month, but I think I’m going to have to move soon because I’m too rock ‘n’ roll for this street.

LW: I guess. One guy came over, and I was in a van with my then-boyfriend, just pulling into the driveway, listening to Lefty Frizzell on the CD player. He knocked on the window of the car. We were a little startled — it was like three in the morning — and he goes, “It’s really loud.” It’s like a little small town here. I’m afraid of pulling my trash cans across the driveway too late at night.

MJ: I’ve heard stories about your rebellious youth. Are you still like that?

LW: I still have that streak, absolutely.

LW: [Laughs.] Well, I’m polite. I guess that’s the dichotomy within me. I don’t like to piss people off just for the sake of pissing them off. I pick my battles.

MJ: I saw you were one of the big-name signers of an anti-war petition — Musicians United to Win Without War.

LW: I got asked to add my name to the list, and I was happy to do it. I was glad to be able to do something. My grandfather on my dad’s side was a conscientious objector in World War I. It kinda runs in my family.

LW: How much do you need to know to know that you shouldn’t go kill thousands of innocent men, women, and children?

I ran into a friend at a club and I said, “What’s your opinion about the impending war?” And he said, “I haven’t made a decision yet. I don’t know who is spearheading this [anti-war] movement.” I said, “Who the hell cares? What do you mean you don’t have an opinion?”

MJ: Your new song “American Dream” touches on drug abuse and Vietnam and ends with the verse “My American dream almost came true, / But the things they promised me never came through.” Is this a new direction for you?

LW: I’ve always wanted to write more topical songs the way that Bob Dylan does. I look up to him for being able to write incredibly beautiful songs that are topical — “Masters of War,” “The Times They Are A-Changin’.”

MJ: So is getting more Dylan-esque a goal?

LW: What else am I going to do? Have failing relationships the rest of my life so I can continue to write about unrequited love? That’s easy. “Boo-hoo. Poor me.”

MJ: Then there’s the song “Atonement” —

LW: That’s dealing with good and evil, God and the devil, fundamentalism and having it crammed down your throat. I lived in middle Tennessee for nine years, so it was everywhere. They don’t ask you if you go to church — they ask you which church you go to. I got inundated with it, but also fascinated by the Pentecostal fundamentalist thing — that whole subculture and the art that goes along with it. I collect primitive and religious folk art. All that weird stuff, bleeding Jesuses and snakes and skulls. And the weirder, the better — all the Santeria stuff.

MJ: Were you raised in the church?

LW: Both my grandfathers were Methodist ministers, but I was raised in an agnostic household. I was left to my own devices.

MJ: Are any of your songs completely imaginary?

MJ: Do the people they’re based on know?

LW: Eventually. They either figure it out, or I tell them. One guy I wrote several songs about, I think he felt a little self-conscious about it and he said, “Well, that will teach me to go out with a songwriter.” I guess it’s a little hard on that end.

MJ: Are your songs ever inspired by a title?

LW: “Car Wheels on a Gravel Road” — I had that line for years and I had some little bits and pieces of verse ideas and it finally all came together.

And sometimes I dream song ideas. I write a song in my dream, the melody and everything. But then sometimes I can’t remember them. I think later on, I probably do.

MJ: When you’re writing songs, are you reflecting on the past or is the process more immediate?

LW:: I usually don’t write about my life right when it happens. I process it, and I store it away. Then, when I get in the mood I pull the stuff back out. I don’t keep a journal anymore. I did when I was a teenager, but now because I write about it all in my songs, that’s what I’m really doing.

MJ: Do you ever look at those journals?

LW:: Yeah. [Laughs.] It’s pretty scary. I was a pretty troubled and rebellious kid. My dad gave me back all the letters I’d written to them when I was a teenager and in my early 20s — those are pretty amazing to read.

MJ: Is it true you got kicked out of school for not saying the Pledge of Allegiance?

LW:: Back then, over the intercom they’d ask you to stand up in class. So in my silent little protest I would stand up but would not put my hand over my heart and say it.

One day, I helped a couple of my friends hand out SDS [Students for a Democratic Society] leaflets on campus. I got sent to the office for that. Then in the office, we all agreed not to say the Pledge of Allegiance. I was suspended indefinitely, until my dad got an ACLU lawyer and I got back in because they said it was unconstitutional.

LW:: I was really involved in the anti-war movement. I’d go to demonstrations and sing. I went to the March on Washington in 1969. I was only 16 and I went with a group of college students since my dad was teaching at Loyola University in New Orleans at the time. Didn’t take a warm enough jacket, that’s what I remember.

LW:: It’s a pretty damn big birthday. I’m not married and I don’t have kids. I’m pretty much the same person I was 20 years ago. My politics haven’t changed. I have the same feeling of idealism. But I am a little bit wiser and more experienced.