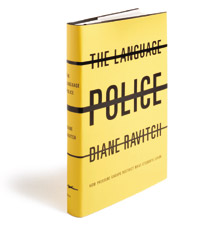 One of the illusions fostered by living in a democracy is that the most critical choices we make as a nation are decided democratically. In America, that belief runs hand in hand with the assumption that experts know best when it comes to technical matters. But what if neither is true? What if the experts don’t know best and critical decisions are being made not only undemocratically but in response to the narrow interests of a few determined people? I could be talking about the war in Iraq, but I’m not. I’m talking about how school textbooks are written, edited, and adopted in the United States.

In the late 1990s, Diane Ravitch, a respected historian of education, was asked to join a nonpartisan agency that was charged with establishing a national test for schools, teachers, and students. What she discovered was a largely invisible, widely adopted set of guidelines and editorial policies that are used to screen not just test questions, but also textbooks, for bias. On its face, this sounds like a good thing. No sensible person could be in favor of test questions that demean minorities, for example. But that isn’t what “bias” means in the educational world today. “Bias” means anything “that might cause any student to be distracted or upset.” In a test question, it also means anything that would cause a member of one group — urban whites, for instance — to do better than a member of another group merely by virtue of being an urban white. Fairness rules. But absurdity results.

The Language Police is a fascinating and often infuriating account of the utter incoherence that the principle of fairness creates in American education. Ravitch’s book is also a penetrating study of the strange symbiosis of extremist politics on both ends of the spectrum. The left, for instance, wants to ensure proportional representation of minorities in textbooks and guarantee a non-Eurocentric narrative of American history. The right, meanwhile, wants to expunge any mention of evolution, while implanting in the student’s mind respectful notions of church and family. Both sides have worked to remove Huckleberry Finn and a long list of other books from school reading lists.

“The bias guidelines,” Ravitch writes, “try to mollify not only conservatives, but also feminists and advocates for multiculturalism, the handicapped, and the aged … . Whereas the right gets topic control, the left gets control of language and images.” Schoolbook publishers kowtow in advance to almost any pressure group — going so far as to edit the words of Chaucer, Swift, and Melville — because what matters most in publishing profitable textbooks is that they be noncontroversial. As a result, self-censorship rules. Ravitch has a better phrase for it. She calls it “preemptive capitulation.” It would be lovely to pretend that a well-researched psychology of education, or even of children, lay behind these bias guidelines, which are effectively not guidelines at all but strictly enforced dictates. But to state such a psychology openly is to see its idiocy all too plainly. Judging by the guidelines, children are so fragile, so impressionable, so easily wounded by the rough-and-tumble of the real world as to be almost uneducable. The only sensitivities these guidelines cater to are those of their crafters.

In the first appendix to this book, Ravitch has compiled an exhaustive list of the words, usages, stereotypes, and topics that have been banned by textbook publishers. Forbidden words? Forefathers. Victim. Snowman. Warrior. Stereotypes to shun? “Boys expressing anger.” “Caucasians living in afßuent suburbs.” Topics for exclusion? Junk bonds. Junk food. Rap music. Yachting. The best way to summarize this appendix is to say that it includes most of the contents of the real world, which children experience every day in their own lives and in the media. Through the best of intentions, textbook publishers have discarded any human experience that fails to affirm the social ideals of the language police. The contents of textbooks are now fundamentally and unequivocally utopian. And, like most utopian literature, they are as dull as dull can be. The one thing such textbooks are sure to teach is contempt for school.

What is the antidote? It begins with a radical notion. “A free society,” Ravitch writes, alluding to Jonathan Rauch’s Kindly Inquisitors, “is not free unless it tolerates offensive words and unpopular opinions.” But in the world of education there will be no getting to that kind of tolerance until censorship ends. That means wholesale revision of the textbook-adoption process. It means putting the language police out of business, so that the pincers of conservative self-righteousness and liberal sensitivity no longer squeeze the brains out of every student. Above all, it means exposing the very enterprise of bias screening. The Language Police is the first step toward ending the absurdities of educational censorship. It should be required reading in the education of every parent.

Verlyn Klinkenborg is a member of the New York Times editorial boards. His most recent book is The Rural Life.