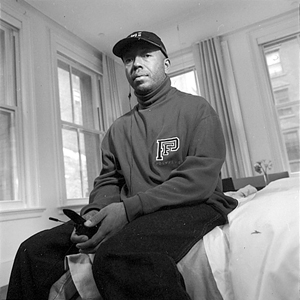 “I don’t eat anything that runs away from me,” says Russell Simmons, by way of explaining his vegan diet. It’s an unexpected lifestyle choice for the world’s most famous hip-hop impresario, but Simmons seems to delight in subverting expectation — so it’s no surprise he counts Susan Sarandon and Arnold Schwarzenegger, Louis Farrakhan and Rabbi MArc Schneir among his friends.

A devout yoga practitioner, ruthless entrepreneur, dedicated philanthropist, and burgeoning political player, Simmons is most famous as the co-founder of Def Jam Records, the label that launched Run-DMC, Public Enemy, and the Beastie Boys, and along the way propelled hip hop out of the ghetto and into the Mall of America. Simmons sold Def Jam to Universal in 1999 for $100 million, which he has since parlayed into a creative and merchandising empire that includes a hit Broadway show (Def Poetry Jam), two HBO programs, Phat Farm apparel, One World magazine, UniRush financial services, and on and on. This summer, Simmons received both a Tony Award and a Peabody — completing his implausible rise from Queens marijuana peddler to high-culture laureate.

The 45-year-old Simmons is affable and eloquent, often answering questions before they’re asked. His multiple agendas and strong spiritual beliefs are artfully woven into his replies, but whatever you make of his contradictions and his self-promotion, there’s no denying that Simmons puts his money — and lots of it — where his mouth is.

MOTHER JONES: What could have happened to you if you’d been busted under New York’s Rockefeller drug laws for selling pot?

Russell Simmons: I’d still be in jail. Yeah. Drug offenders sometimes go to jail for longer than rapists and murderers for small amounts of drugs. And addicts who could be treated for $5,000 sometimes cost the city and state government as much as a million dollars. Then they come home after 15 years in jail, and we find out that they’re criminals. When they went away, they were just users of drugs.

MJ: Is Governor Pataki keeping promises to reform these laws?

RS: He’s keeping his promises to work on it. I know he’s enthusiastic, but he’s getting a lot of pressure from people on the right who are referring to this dialogue as the beginning of a jailbreak. And others on the left are referring to it as a sellout. I just want the people who need to come home to come home now, and other people to have their sentences dramatically reduced.

MJ: Is hip hop less political now than when you were releasing Public Enemy albums?

RS: Well, hip hop is the truth in our community. People have been very apathetic about their influence on the social and political level. The biggest effect the Hip-Hop Summit could have is to register voters. When young people and people who are conscious of the struggle, which is all of the hip-hop community — just listening to rap records you become sensitized — when they vote they will look to give opportunity to people locked out. And they will have a dramatic effect on this country.

RS: When I turned 18? Hell no! I didn’t vote until about five years ago. It just came to me that I needed to get more involved politically; possibly because of my spiritual practice, it made me feel more connected and more responsible. So I try to promote that to other people, to make them realize the power they have and use it.

MJ: Who were your role models?

RS: Oh, God. In my 20s and 30s, I wasn’t so involved in social political issues. When I was growing up, I liked Louis Farrakhan. I still like Louis Farrakhan. When I was young, I never realized there was anything anti-Semitic in his message, because that was never a part of what we learned as young people. I mean, there was only Black Muslims and heroin addicts on my corner. I should mention, because some people don’t get it, I am also the secretary of the board of the Foundation for Ethnic Understanding; I work with Rabbi Marc Schneier.

MJ: And you and Rabbi Schneier were on Bill O’Reilly together during the Iraq War.

RS: I was trying to get all my friends — Arnold Schwarzenegger, Bruce Willis, and others — to help me. I was really worried about a buddy of mine, Susan Sarandon, at that time. I know people have been punished for having an opinion. The Dixie Chicks got punished; and all of a sudden Sheryl Crow and Jewel forgot what they used to think. They wouldn’t even stand up to say, “These girls have a right to say whatever and you should at least listen.” We need to listen. The most important thing we have to do as Americans is accept that dissidents built this country.

MJ: Do you fear getting Dixie-Chicked?

MJ: You often talk about how yoga is unifying, yet much of hip-hop culture is about material things. More about acquiring…

RS: Instead of giving?

MJ: Do you think your clothing, cologne, and other luxury lines impact your credibility as political figure and role model?

RS: My Phat Farm sneakers? They underwrite the economic-justice campaign that traveled around the country. Nike, Adidas, and Reebok used to be the only sneakers anybody cool would wear. There was no such thing as an urban-clothing company. Now our company is $300 million — the beginning of a real business, because we broke down the ceiling. And the reason we broke it down? We called for economic justice: “Isn’t it time for change, for equal, high-quality education?” That’s where the energy came from, that’s why we sold sneakers. My flag on Phat Farm sneakers is upside down, promoting a better America.

MJ: How much of what you make goes back into social programs?

RS: Not everything. My brother, the Reverend Run, the president of Phat Farm sneakers — I don’t believe this is totally true because it sounds a bit funny — but he says, “You can’t help the poor if you’re one of them.” I give to 50 charities. I run the Hip-Hop Summit. I fund it myself. I can probably do more and I know it. But imagine if all hip hoppers knew that being conscious was being part of your business and you’d make more from being conscious?

RS: None of the awards mean shit to me. I guess I should not say it like that. What means something to me is that we promote hip hop. It did mean a lot — I was shocked. It gives you a level of confidence.

MJ: When you began Def Poetry Jam, did you imagine people would watch poetry on TV on a Saturday night?

RS: People can write poetry in little clubs forever, but I saw the clubs getting more and more popular, and the people in the clubs looked different. They wasn’t dreadlocks and finger snapping and a whole alternative lifestyle. People were expressing more mainstream ideas. It was very obvious that it was time [for a TV show]. Now 60 to 80 percent of the kids in inner-city schools write poetry. If you asked five years ago, “How many of y’all write poetry?” nobody would have raised their hand.

MJ: How is hip-hop poetry different from rap lyrics?

RS: If you want to say something profound, writing from your heartbeat is different than writing from the loud voices you get from music. If they’re rapping from noise, it’s about robbing people. It’s that simple.

MJ: What’s next for the Hip-Hop Summit?

RS: We’re talking about aids testing as a priority. A third of all African Americans who are HIV positive are not aware of their status. And 50 percent of the new cases in this country are African American.

RS: I want to tell the truth. I don’t want to appease everyone. It seems very difficult to be steadfast on truth and be a politician.

MJ: If you could meet President Bush, what would you tell him?

RS: Fear is not the basis of governing this country.

MJ: Do you think Bush knows who you are?

RS: I think Colin Powell knows who I am.