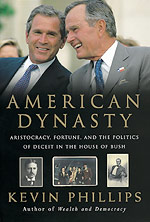 Over the past year a cottage industry of anti-Bush diatribes has exploded onto the best-seller list. Many have unforgettable titles like Molly Ivins’ Bushwhacked or Hunter S. Thompson’s Kingdom of Fear or Al Franken’s Lies (And the Lying Liars Who Tell Them). These books are brimming with nasty one-liners and parlor jokes portraying George W. Bush as a dangerous dunce,
an aristocratic oil brat unfit for the Oval Office. The Bush Cabinet fares no better: Vice President Dick Cheney, for example, has been characterized as an utterly corrupt stalking horse for Halliburton, while Secretary of Defense Donald Rumsfeld has become Dr. Strangelove incarnate.

Given this left-liberal publishing phenomenon, where evil Bushies
lurk around every civic bend dismantling our constitutional rights, it is with welcome relief that political commentator and one-time GOP strategist Kevin Phillips has stepped into the fray.
Unlike the recent spate of anti-Bush books, Phillips’ American Dynasty — an erudite manifesto
on the dangers of cronyism, hereditary privilege, “paper entrepreneurialism,” and tax shelters — is devastating due to its analytical fair-mindedness. Essentially, he traces how four generations of Bushes corrupted U.S. foreign policy through international business ventures that benefited
the family. The most recent two George Bushes aren’t evil people, Phillips argues, just greedy and ambitious Ivy League Texans. The Bush family has brought the American political system to a “perilous state,” he believes, due to their cunning brand of petro-politics. “The family’s ties to oil date back to Ohio steelmaker Samuel Bush’s relationship to Standard Oil a century ago, while its ultimately dynastic connection to Enron spanned the first national Bush administration, the six years of George W. Bush’s governorship of Texas, and the first year of his Washington incumbency,” he writes. “No other presidential family has made such prolonged efforts on behalf of a single corporation.”

With great skill, Phillips illuminates how the “Bush Dynasty” has long used such old-boy organizations as Yale’s Skull and Bones, the CIA, Dillon Read, and most recently the Carlyle Group to further its main objective: political-economic power. He delineates the family’s ethically questionable dealings with such companies as Enron, Zapata Petroleum, and Halliburton. We even learn that Prescott Bush, George H.W.’s father and a U.S. senator from Connecticut, had investment dealings with Nazi Germany in the 1930s while working for the banking firm Brown
Brothers Harriman.

A major motif that Phillips develops throughout American Dynasty is the influence of Texas machismo on modern political culture. In his view, the Lone Star State has
“an ego to match its acreage.” Phillips sees the Dallas-Houston-Waco-Austin- Midland way of doing
things as detrimental — even menacing — to the world at large. Cleverly, the Bush Dynasty, with its deep New England roots, shifted its operations to Texas after World War II to a land where the law could be more easily manipulated, he claims. Instead of sipping sherry at the Century Club in New York, the Bushes, by the time the Astrodome was built in the mid-1960s, were plopping their cowboy boots on the velvet sofas at the Petroleum Club in Houston. Phillips, however, makes clear that the genius behind the Bush Dynasty is its ability to be from both the Permian Basin and Wall Street. He quotes University of Pennsylvania professor John J. DiIulio — who had been the director of the White House Office of Faith-Based and Community Initiatives — as deeming this dynastic synergy the rise of “Mayberry Machiavellianism.”

There is nothing new about Texans rising to the top in American politics. Dwight Eisenhower hailed from Denison and Lyndon Johnson from Stonewall, and Phillips has no beef with either of them. Neither of these national leaders, however, was a religious fundamentalist like George W. Bush. It’s the certitude of our current president’s born-againism that disturbs
Phillips the most. Somehow his descriptions of oil greed or CIA intrigue or Beltway manipulation are less alarmist than the long chapter devoted to Bush’s evangelism. “George W. Bush’s early emergence in national politics, between 1986 and 1994, tapped religious forces akin to those promoting Ariel
Sharon and Benjamin Netanyahu in Israel and fueling the rise of Islamic parties in Pakistan, Turkey, and elsewhere,” Phillips writes. While this assertion may not be provable, Phillips does a credible job of connecting Protestant fundamentalism in Dixie with similar movements in the Middle East and East Asia. His exposé on the history of Armageddon as an influential concept in American
foreign policy is simultaneously humorous and scary.

Most of American Dynasty is not based on primary research. Phillips borrows ideas throughout the book — always with scrupulous accreditation — from dozens of secondary sources. He relies, at times quite heavily, on two workmanlike books from the 1980s: Nicholas King’s George Bush: A Biography and Fitzhugh Green’s George Bush: An Intimate Portrait. In graceful original prose, he incorporates geopolitical notions first explored by New York Times columnist Paul Krugman, historian Daniel Yergin in his magisterial book The Prize, and Seymour Hersh in the New Yorker. But the syn- thesis is pure Phillips: He is a deep thinker extraordinaire, who does a masterful job of connecting the military-industrial dots right up to the conduct of the
Iraq War and the postwar reconstruction.

While his subheads and chapter titles are too cutesy for my liking — e.g.,
“Indiana Bush and the Axis of Evil,” “The Not-Quite Royal Family,” and “George H.W. Bush: Man in the Brooks Brothers Trench Coat? — Phillips has, nonetheless, created a searing indictment of the Bush Dynasty. In American Dynasty, he has provided an informed, nigh-genetic basis for
understanding our current president.