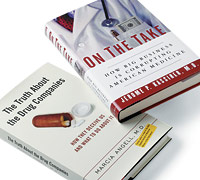 Every author should be so lucky. While Jerome Kassirer and Marcia Angell
were holed up in their offices, typing away, Congress launched an investigation into financial
entanglements between industry and the National Institutes of Health. Then Pfizer was hit with
nearly half a billion dollars in fines for paying doctors to hype its anti-seizure drug Neurontin
for unapproved—and largely unproven—uses. Now, New York state attorney general Eliot
Spitzer has accused another drug giant, GlaxoSmithKline, of burying evidence that the antidepressant
Paxil can trigger suicide. It’s great news for Angell’s and Kassirer’s book sales,
bad news for the rest of us.

These stories about the unholy alliance between the pharmaceutical
industry, researchers, and doctors may have seemed, to the casual observer, like nothing more
than isolated blips. Sad to say—as these surprisingly bare-knuckled books by the last two
editors-in-chief at the New England Journal of Medicine make clear—such accounts provide
a mere glimpse of the corruption of medical science.

In the last two decades, the drug and biotech industries have gained
unprecedented leverage over what doctors and patients know—and don’t know—about
the $200 billion worth of prescription pharmaceuticals consumed by Americans each year. Industry
has gained that leverage by funding and, increasingly, controlling medical research. It has also
used its deep pockets to effectively buy the loyalty of physicians in private practice and to sway
the opinion of thought-leaders in academia. Grasp the full scope of industry influence over medical
science and practice, and it’s enough to make anybody think twice before filling a prescription.

At NEJM, Angell and Kassirer had front-row seats to industry’s
infiltration of medical science. Angell aims her broadsides at the misdeeds of the pharmaceutical
industry, which,
she writes, “has moved very far from its original high purpose of discovering and producing
useful new drugs. Now primarily a marketing machine to sell drugs of dubious benefit, this industry
uses its wealth and power to co-opt every institution that might stand in its way, including the
U.S. Congress, the Food and Drug Administration, academic medical centers, and the medical profession
itself.”

Drug company influence begins with funding most of the clinical research
upon which the nation depends for accurate information about the uses and dangers of drugs. That
means that the studies in scientific journals are increasingly likely to be designed, controlled,
and even ghostwritten by marketing departments, Angell argues, rather than scientists.

Many researchers and doctors maintain—and no doubt believe—that
science always arrives at the truth, and that their professional judgment cannot be influenced
by this influx of industry money. But all evidence suggests otherwise. Studies involving thousands
of published papers show unequivocally that corporate largesse skews science: When industry
(rather than government) pays for a study, that study is more likely to reflect well on its products.
Similarly, authors who argue favorably for a company’s drug are more likely to have financial
ties to the company than researchers whose opinion is either neutral or negative.

The bottom line is that the medical journals, those critical reference points
for doctors, are filled with happy talk about drugs that are often either more dangerous or less
efficacious than promised. Far from being an exception, GlaxoSmithKline’s apparent failure
to publish negative data about Paxil is now routine in an industry that treats scientific journals
less as repositories of knowledge than, as Richard Horton, editor of the
British medical journal The Lancet, puts it, “information laundering operations.”

Where Angell chronicles the drug companies’ driving role in all of
this, Kassirer details the complicity of increasing numbers of doctors and academics who are living
high on the industry hog. Kassirer describes going to a medical meeting where the atmosphere seems
less conducive to the exchange of sober scientific information and more “Hollywood set.”
As he recalls, “Scores of beautiful men and women from pharmaceutical, biotechnology, device,
and book companies greet the doctors wandering through the hall, where enormous, expensive, artistic
creations announce the success of the companies’ drugs with lights, sound… and electronic
wizardry.” Doctors crowd in for free notepads, pens, and T-shirts emblazoned with drug brands.
Then there are the dinners at chic restaurants, and all-expenses-paid excursions to nearby attractions.

These freebies are only the most visible aspect of the culture of greed
and self-deception that now permeates much of academic medicine and private practice. A quarter
of academic scientists now have financial ties to industry: Companies woo them with invitations
to sit on scientific advisory committees (for a salary, of course), lucrative consulting contracts,
and stock options potentially worth millions of dollars. Doctors in private practice get on the
gravy train by accepting bounties for enrolling patients in studies, or signing up as “consultants”
in exchange for being flown to exotic locales to hear lectures about a company’s drugs. All
the perks add up. For one head of an academic medical department, according to an investigation
by the Boston Globe, industry liaisons amounted to more than $400,000 in a single year.

None of this would matter so much if prescription drugs were just another
type of consumer product, like fancy vodka or luxury cars. But drugs are not like other goods, and
the corrupting influence of pharmaceutical industry money has hurt patients. Earlier this year,
to take just the most recent example, the FDA cautioned doctors about prescribing certain antidepressants
to children after reviewing 12 studies that found them no more effective in teens and children than
a placebo and after the British government warned that one brand was three times as likely
to trigger suicide. Those results undoubtedly came as a shock to the doctors around the country
who have been writing 10 million antidepressant prescriptions for children and adolescents each
year.

Both Kassirer and Angell offer a variety of potential fixes, ranging from
creating a federally funded institute for drug studies to changing patent laws so the industry
will stop padding profits by reformulating existing drugs and return to its original mission of
coming up with truly innovative drugs. More difficult to remedy, however, is the loss of the scientific
ethos, the idea that doing good is ample compensation. Not even science can overcome the corrupting
influence of money.