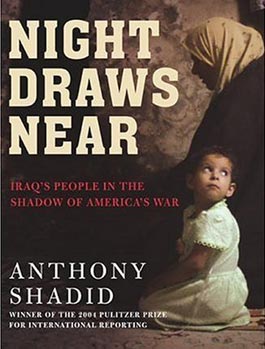 When we hear the bomber coming, we hold our breath and our hearts pound as if they are to jump out. Then as soon as we hear the explosion, no matter how close, we launch a sigh of relief. Afterward, one starts to calculate whether it’s dropped on a love one.

Scenes like this one—an Iraqi civilian describing the American invasion in 2003—are a hallmark of Night Draws Near: Iraq’s People in the Shadow of America’s War, the new book from Anthony Shadid, a Pulitzer Prize-winning reporter at the Washington Post. Like the countless other books on Iraq now hitting the bookstores, this one gives an incomplete, largely anecdotal picture of war. The main difference is that Shadid, a Lebanese-American who, unlike many Western reporters speaks Arabic, has given an account of what ordinary Iraqi civilians have gone through in two years of war—a war for which Iraqis have no name, merely calling it suqut, “the collapse” or “fall.” Other recent books such as Larry Diamond’s Squandered Victory or David L. Phillips’ Losing Iraq discuss the policy failures of the American occupation in Iraq. Shadid looks primarily through the anxious eyes of those caught up by the forces shaping, destroying, and rebuilding the country.

Stationed in Baghdad during the invasion in March of 2003—waving off the chance to be embedded with soldiers and fed storylines by the Pentagon—Shadid was in a position to describe life during the “precision bombing” raids. Saddam’s regime dug trenches around the city and burned oil in them, to try—ineffectually—to confuse the bombers, plunging the city into darkness for weeks. During the airstrikes, families would fling open all the doors in the house to ensure that they didn’t get ripped off the hinges by the blasts. The price of food and gasoline fluctuate wildly during the war, creating havoc in the lives of families around the city. A mother, nerves frayed, screams at her son after he bangs his chair. Iraqis experience the trauma of seeing civilian casualties, telling Shadid that “the violence took place over and over” in their heads. The author himself recounts how he and Hamza Hendawi, a reporter for the AP, found their own friendship fraying during the bombing of Baghdad. Minor details like these—Shadid has a sharp eye—retell a period of the war that most Americans remember through flashy graphics on CNN.

After the fall of Saddam’s regime, many Iraqis wavered between relief that he was gone and anxiety at what was to come. Shadid’s perceptive reporting skewers any notion that Iraqis divided neatly between anti-Saddam and anti-Bush camps. Most were glad to see Saddam go, but remained suspicious of American intentions. “God curse Saddam and the Americans” was a common graffiti scribbling. When U.S. troops enter Baghdad and raise the American flag, one man narrows his eyes and says, “This is not the liberation they told us about.” When the United States failed to secure Baghdad in the weeks after the Iraqi Army retreated, and weeks of looting ensued, bitterness swelled. As Shadid notes, few in the Middle East speak of “freedom,” but rather of “justice,” and the rape of Baghdad appeared monstrously unjust to many fiercely patriotic Iraqis, who saw the historic capital, as one artist put it to Shadid, as a “beautiful girl.”

The mistakes were compounded when, on May 22, 2003, the new proconsul of Iraq, Paul Bremer, announced the formation of the Coalition Provisional Authority by using the word “occupation.” In Arabic, the word, ihtilal, evokes Israel’s occupation of Lebanon and Palestine defined by images such as “American-built Apache helicopters hovering over West Bank villages.” Assurances that the United States had come to free Iraq offered scarce comfort; Iraqis can recall the words of a British major general in 1917: “Our armies do not come into your cities and lands as conquerors or enemies, but as liberators.”

The toppling of Saddam’s regime set loose a thousand unintended consequences in Iraq—even beyond those predicted by the State Department’s “Future of Iraq” project, which the Bush administration famously ignored. The myth of American omnipotence, widespread among Iraqis, unexpectedly gave rise to conspiracy theories when the occupation forces failed to restore electricity and services quickly—how could the United States fail unless they intended to? Meanwhile, a religious revival surged through the Shiite regions of Iraq, empowering men such as the widely respected Ayatollah Ali al-Sistani, as well as Muqtada al-Sadr. Sistani surprised Bremer by demanding direct elections for Iraq in late 2003, contrary to CPA plans. Sadr, a young low-ranking cleric once dismissed as a “two-bit thug” by CPA spokesman Dan Senor, tapped into anger and resentment among poor Shiites over both the occupation and the lack of progress on reconstruction. Sadr’s movement eventually staged an uprising in April of 2004 that, along with the simultaneous rebellion in Fallujah, would hasten the end of the formal occupation (though not the U.S. military presence).

Shadid makes clear how significant Sadr’s ascent really is. His father, Muhammad Sadiq al-Sadr, a maverick ayatollah whom Saddam had assassinated in 1999, had built up an energetic and devoted following during the 1990s by engaging in grassroots activism, offering social services and a message of resistance to Saddam’s rule. As with Hezbollah in Lebanon and Hamas in the Palestinian territories, religious populism proved a potent new force in Iraq. The younger Muqtada continued this innovation, attacking the Shiite clerical establishment both for its acquiescence under Saddam and its collaboration with the Americans. While Sistani remains the spiritual leader of the Shiites, it is Sadr who has become a national hero. (Polls consistently show him to be one of the most popular figures in Iraq; and his opposition to the newly drafted constitution may end up derailing the political process—contrary to the widespread belief that his movement was defeated for good in an August 2004 standoff.)

As Sadr’s popularity shows, nationalism remains a powerful force in Iraq, mixing with Islam in often unpredictable ways. The rise of the Sunni insurgency is a case in point. Shadid notes that Islam provided the “vocabulary” for resistance against the occupation, and all throughout the summer of 2003, as anger at the United States boiled over, many Sunnis, especially in the rural regions in the west, became radicalized. During those days, Donald Rumsfeld called the insurgents Baathist “dead-enders,” but Shadid saw differently—for instance, from the family of a young Sunni who died in an early firefight with U.S. troops: “Omar sacrificed his soul for the sake of his faith, for the sake of his country… not for the sake of the previous regime.” Unlike their Shiite counterparts, the Sunnis don’t have a rigid hierarchy of clerics whom they follow—indeed, the Sunni ulema had long discredited itself by cooperating with Saddam’s government—and fervent young Sunnis freely interpreted Islam for themselves, drawing upon the anti-American preaching of radical clerics, whose sermons could be bought on DVD at the market for pennies. Shadid finds few Iraqis in the Sunni regions talking about liberation and democracy: “Instead, the language was that of religion: infidels and Muslims, East and West, Islam and its enemies.”

But if the insurgency is held together by religion, it was founded on provocation and the sense of besiegement felt by many Sunnis. The rural western regions of Iraq—dominated by conservative tribes and poorly understood by the Americans—quickly soured on the occupation after a few seemingly minor incidents. Shortly after Baghdad fell, a rocket attack on a U.S. convoy led to raids in the small Sunni town of Heet, stoking anger among a population with strong notions of pride, dignity, and honor. “After this operation,” says a farmer, “we think one hundred Saddams are better than the Americans.” Says a man after a house-raid: “If an Iraqi had done this, we would have killed him.” (In another town, Thuluyah, a man is commanded by his tribal elders to kill his son, who was an informer for the occupation; the Americans are of course blamed.) Sadr’s insurgent movement, too, gained strength after an American helicopter tried to knock down a black flag (the standard of Sadr’s Mahdi Army) in Sadr City, angering many poor Shiites.

The fault here doesn’t lie primarily with the conduct of the U.S. military—Shadid’s book gives the sense that there was no possible way to avoid provoking anger. An Army captain participating in the raids tells Shadid: “We try to be as culturally sensitive as possible, but we want to make sure everybody goes home alive.” Given that basic tension, some degree of violence is inevitable. Meanwhile, the occupation forces rarely get credit for the good things they do. At one point, Shadid watches a U.S. soldier doles out dinars to local imams for street-cleaning; later, speaking in Arabic, the imams shrewdly take all the credit for the money. “I thank the sheikh, not the Americans,” says one recipient. In many ways, the military simply cannot win.

Perhaps, then, the occupation was simply doomed from the start—though Shadid never addresses this question directly. Most of the recent books on Iraq, such as Diamond’s Squandered Victory, rightly accuse both the Bush administration and the CPA of botching what was otherwise—one assumes—a viable idea: namely, transforming Iraq. Is this a reasonable conclusion? We’ve all heard about the United States’ mistakes in Iraq: launching an invasion force without enough troops to keep the peace; disbanding the Iraqi Army and swelling the insurgency with angry and battle-hardened soldiers; failing to prevent looting in Baghdad. These were all gross errors. But the conclusion authors such as Diamond draw is that, with better planning and more competence from the Bush administration, Iraq might now be on the path to peace and democracy.

Maybe so. But Night Draws Near—with its keen portrait of how Iraqis viewed the occupation—makes clear how little room the United States had for making mistakes. A “competent” occupation would have had to foresee and handle the improbable rise of a junior Shiite cleric; avoid using any inflammatory language such as “occupation”; steer clear of offending the deeply conservative and deeply distrustful Sunni tribes in the rural regions of Iraq; reconstruct Iraq as quickly and as capably as possible to avoid conspiracy theories about a belligerent United States, and so on. Hundreds of perfectly understandable mistakes would have had to have been skirted. And even then, a million other things could have gone wrong. Just as likely, the idea of transforming a society Americans barely understood was doomed from the start.