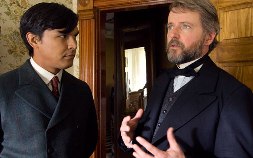 Read Dee Brown’s Bury My Heart at Wounded Knee and you will feel palpably that your ancestors brutally murdered Indians so you could live on that happy little plot of land where you sit reading. Don’t expect it to feel good. In fact, it feels so bad that Americans have repressed, suppressed, and finessed the truth about our nation’s founding for more than 200 years. It’s hard to retrieve a truth so manhandled even when you want to: Native American History Month, which is this May, comes and goes each year with none of the educational earnestness of Black History Month.

When it comes to making movies about Native Americans, even solid filmmakers can look like drama teachers putting on a Thanksgiving play. HBO has fallen into this cultural trap with director Yves Simoneau’s eponymous docudrama based on Dee Brown’s book, which premiered May 27. The film focuses on the struggles of the Sioux, from the Oglala destruction of General Custer’s forces at Little Big Horn to the massacre of 300 unarmed Lakota at Wounded Knee—the butchery that effectively ended Native American resistance.

Bury My Heart at Wounded Knee introduces a range of characters, unsettling the simple innocent/guilty pairing that often stands in for intelligent discussion of Native American history. Senator Henry Dawes’s character appears genuine in his desire to “civilize” and protect the Indians—insofar as his efforts do not hinder whites’ settlement of the land. The Sioux protagonist, Dr. Charles Eastman, is initially repelled by his father’s belief that “The Earth belongs to the white man; there is no future outside his world.” But the white world treats Eastman well, lavishing him with scholarships and awards, and he becomes the native spokesman for Senator Dawes’ plan to set the nomadic Sioux up as small farmers. But when Eastman takes his Harvard medical training back to the Sioux reservation, he has second thoughts. He writes to Dawes, “Measles, influenza, and whooping cough have ascended from hell all at once…Of equal consequence is the epidemic of hopelessness that has overtaken the reservation.” Eastman ultimately rebels against Dawes’s push for assimilation at the cost of his newfound identity as an assimilated Indian, but he remains happily married to a white woman who supports the native cause.

Even with these attempts at complexity, the film feels a lot like an after-school special. Its characters are forced to serve as archetypes, and their dialogue does double duty as an aphoristic history of the United States’ conquest of the Indians. For example, Eastman concludes that the reservation Indians’ willingness to “bear the wretched taste of cod liver oil for the ounce of spirits contained in the bottle is to me the whole of their experience in a nutshell.” His second thoughts about assimilating take the form of a nightmare in which he is split in half by a train which is simultaneously that which carried him to a white-run Indian school and the railroad the American government wants to build across Eastman’s tribe’s lands.

As a counterpoint to HBO’s mainstream tip of the hat to Native American History Month, Mother Jones turned to a documentary by the Sioux actor Floyd Red Crow Westerman, made to create a forum for Native American elders and historians to recount their tribes’ own histories. Westerman—who played Ten Bears in Dances with Wolves and has portrayed Native American characters in Walker, Texas Ranger; The X Files, and Murder, She Wrote—objects to the “gross misuse of history” in Bury My Heart at Wounded Knee, and particularly to the film’s suggestion that Eastman disavowed his Sioux identity. Westerman’s film, Exterminate Them: The California Story, which premiered at the San Francisco American Indian Film Festival last year, will serve as the pilot episode of a 6-part series called America’s War on Indian Nations.

As the title suggests, Exterminate Them offers harsher medicine than Bury My Heart at Wounded Knee. In the opening moments of the film, Westerman compares the Indian Wars to the Holocaust and the reservations to concentration camps. Westerman’s similes aren’t so far off. After all, Peter Burnett, the first governor of California, declared, “[A] war of extermination will continue to be waged between the two races until the Indian race becomes extinct.” California’s missions served as the prototype for the United States’ reservations, which were first proposed in Congress two years after Burnett led California into statehood. Westerman’s documentary features historian David Stannard’s deduction that mission Indians received a daily diet of some 600 calories a day—about what Jews in concentration camps were receiving at the end of World War II.

But the view of the United States’ treatment of Native Americans as a minor infraction best forgotten is so powerful that Westerman’s account cannot escape the air of melodrama that clings to claims of Native American victimization and to all comparisons with the Holocaust. Westerman may have damaged his own credibility by playing stereotypical Native American roles, at one point even shilling for “Lakota” brand pain reliever in full Sioux regalia. But his project faces the nearly impossible challenge of introducing genocide into the national debate in a nation that has never acknowledged its crimes. Doing so is no small matter: Germany’s formal recognition of the Holocaust triggered several generations of national shame. And even with that contrition, few Germans have contributed to the collection of superb films about the Holocaust that have lodged that slaughter in our minds as reality rather than exaggeration.

It may simply be too late for the United States to initiate an intelligent and genuine national conversation about the Indian Wars. Facts and characters have been lost to history, leaving only the archetypes of stoic, formal-seeming Native Americans and earnest-but-hardnosed U.S. government and military men to populate our imaginings of history. Denial has become second nature, but like a repressed personal tragedy, it gnaws at us. The result is bad movies that we feel compelled to continue making and watching.