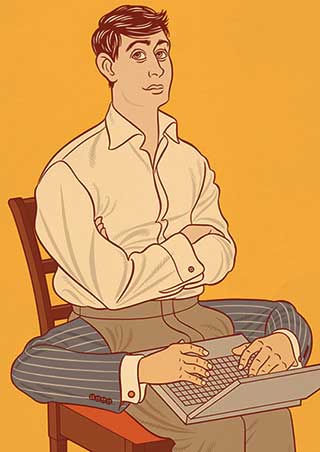 Getz’s Let’s Talk Tallahassee blog is a paean to civic boosterism, inviting readers to submit ideas to help business leaders and developers improve the city. “I’ve found plenty of great reasons to live here. But I’m still not completely satisfied,” Getz wrote, “so I’m asking you for help.” Her blog was so successful that the Gannett-owned Democrat (a newspaper I once worked for) “reverse published” many of its posts—along with Getz’s photo, in color, whenever possible—as articles in its metro section.

One of Getz’s topics was the city’s ambitious plan to convert its downtown area into an arts district, which hit resistance when the Democrat reported that city officials were entertaining a proposal to erect a Wal-Mart there. “I don’t know what it is about that place, but the mere mention of the name turns some otherwise reasonable people into illogical lunatics,” she wrote in a blog post that the Democrat reprinted. “At least take a moment to consider the city’s line of thought.”

It wasn’t the first time Getz had urged readers to calmly consider the pluses of urban development. But this time she was asking them to give a fair shake to a former client. According to the website of CoreMessage, the PR firm she works for, the young executive led an “award-winning legislative, grassroots and media campaign” for the big-box corporation in 2005, spearheading an effort to repeal Florida’s fuel-price controls so that Wal-Mart could undercut local gas-station prices. Neither she nor the Democrat disclosed this. Getz still sees no conflict of interest. “We’re kind of off and on with them,” she told me of her firm’s relationship with the chain. When she blogged about the downtown plan, “at that point, we weren’t working with Wal-Mart, and I wasn’t being paid to talk about them or put them in a positive light.”

As newspapers’ circulation numbers and ad revenues free-fall, their executives have decided that publications must go “hyper-local” and online, and they’ve enlisted the help of amateurs such as Getz to do it. But as her Wal-Mart plug shows, the newspaper industry’s embrace of “citizen journalism” has a downside. Reader-submitted content rarely gets vetted by editors. In the same month as Getz’s Wal-Mart post, the Democrat published a story by a retirement home’s development director about the complex’s great new golf course—without disclosing her job—and a woman wrote an article about a boy who’d organized a cancer charity event without noting that she’s his mom. This may sound like small-time stuff, but it exemplifies the self-defeating side effects of newspapers’ new strategy for survival.

Call it the second phase of the usa Today-ification of the press; after all, the media empire that gave us the McPaper is now setting newspapers’ online agenda. “Gannett is about local, local content,” declared Chairman Craig Dubow shortly after taking control of usa Today‘s parent company in 2006. The company’s 85 dailies have since doubled the amount of local news in their pages. Content has become “platform agnostic”—making print and online versions interchangeable. The chain’s newsrooms were rechristened “information centers” and reporters became “mojos”—mobile journalists who shoot their own photos and videos (badly, it turns out) and post them to the web without editing. Long-form and investigative stories were replaced by short, searchable bursts of information.

The corollary of the shorter-faster-more plan was crowdsourcing: enlisting unpaid citizen journalists like Getz to fill the local-content hole. The Tallahassee Democrat‘s website now features reader-written blogs on topics ranging from Florida State football rumors to “trashology”—ruminations on poor, white, rural living authored by one “Miss Trashahassee.” The print edition now includes a smorgasbord of reader-submitted content such as “HomeRoom,” a page of school news generated by parents and school administrators. Rather than freeing up time for reporters to cover important stories, the new model often means simply laying off salaried pros and putting the squeeze on whoever survives the cuts. As Ryan Sholin, a new-media blogger, writes, “It’s hard for lifelong newsroom types to see layoffs one day and reader participation initiatives the next and not feel a bit slighted.”

The wave of journalistic outsourcing has some new-media advocates hailing the death of the “fortress newsroom” mentality and touting the beginning of an era where newspapers not only listen to their readers but invite them into the inner sanctum. “In fortress newsroom, readers are something of a necessary inconvenience. We need their business, but not their ideas,” writes Steve Smith, editor of Spokane’s Spokesman-Review. Smith and other citizen-journalism boosters are fond of repeating the mantra of Dan Gillmor, author of We the Media: Grassroots Journalism by the People, for the People and the director of the Center for Citizen Media: “Our readers know more than we do.”

But if the elitist fortress-newsroom mentality held John Q. Public at arm’s length, it also kept PR flacks and unqualified hacks out of the newsroom. By forcing their beleaguered staffs to depend on outsiders for content, then running the content without much editorial oversight, newspapers may be taken in by crackpots and sly marketers who make Jayson Blair look like a grade-school plagiarist. Lobbyists and spin doctors have already taken notice of the new model. Take the South Dakota Politics and Daschle V. Thune blogs, which influenced the Gannett-owned Sioux Falls Argus Leader‘s coverage of the state’s 2004 United States Senate race; eventually, the bloggers were found to be on the payroll of just-elected Republican Senator John Thune. “Got a story you can’t convince a mainstream reporter to run?” wrote Chris Suellentrop in Slate. “Leak it anonymously to a blog on your payroll. Then get a local reporter to write a story on the controversial, gossipy, local political blog. Soon everyone in town will be talking about the story you leaked to the blog…. And no one will know that the blog post was a paid placement until after the election.”

But why bother with costly Astroturf blogs when it’s never been easier to get the instant aura of legitimacy that comes from getting your story printed in a newspaper—or on its website? Of course, that aura of legitimacy is diminished as newspapers replace reported news with unmediated—and sometimes unreliable—information. Craig Newmark, Craigslist founder and a news junkie, has expressed his concern about the “increasing disinformation” in citizen journalism. “The problem is that with blogging, the model is publish first, maybe fact-check later,” he told pbs‘s Frontline in 2006. “In newspapers, the model is you fact-check first and then publish. But those models are merging.”

New York University journalism professor Jay Rosen says that newspapers should be more diligent in fact-checking their blogs. But Rosen (a proponent of journalistic crowdsourcing with whom I tangled over Mother Jones‘ July/August 2007 package, “Politics 2.0”) and other advocates of Journalism 2.0 say newspaper professionals must embrace new media’s open participation and freewheeling discourse. Doc Searls, a programmer and new-media writer based at the University of California-Santa Barbara, agrees. “The key challenge is to reframe the newspaper business as one that happens in a wide-open, networked world,” he says, “not as a print business that happens to do some stuff on the web.” Rosen says the critics of Gannett-style crowdsourcing are out of touch. As he told me, “The curmudgeon class has its answer: Bitch about it!”

Cut me a slice of curmudgeon pie, please. If you could convince me that crowdsourcing and mojos and information centers weren’t about cost cutting or lazy journalism, I’d be all for them. The blogosphere and the 24/7 news cycle are realities, and editors and reporters have a lot of ink-stained baggage to dump if they want to thrive in the new-media world. But that doesn’t mean that bean-counting publishers must recruit mercenary bloggers or convert their cub reporters into untrained, overworked, self-editing news tickers.

The only thing newspapers still have going for them is their reputation for telling the truth, going deep, and reporting good stories. Bring on enough Stacey Getzes and you’ll destroy the brand name newspapers have built up over the last century even faster than the Internet can do it on its own. This brave new world requires more work by newspaper publishers and editors, not less. There’s a place for reader blogs and community participation in the 21st-century newspaper, but let’s not kid ourselves that they are a substitute for what people look for in their morning paper. As Stacey Getz readily admits about her blog, “This is not true journalism.”