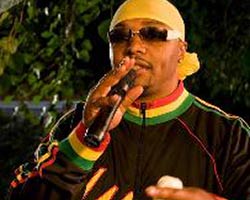 A decade ago, Chicago rapper Common’s album One Day It’ll All Make Sense was released to critical acclaim, partly due to a unique track by a poet named Malik Yusef. Yusef’s reflections on life in Chicago were backed by piano, bass, and saxophone, tucked in between the hip-hop beats of the rest of the album. Since then, Yusef has carved out a space within hip-hop for his spiritual and philosophical spoken word, a niche that has earned him five “Best Poet” nods at both the Chicago Music Awards and the Truth Awards, along with a cameo on Kanye West’s Grammy-winning album Late Registration and an appearance on HBO’s Emmy winning show Def Poetry.

In his work, Yusef draws on his experience as a member of Chicago’s famous Blackstone gang, evoking the loneliness of street life with simple, powerful lyrics: “All I have to hold / Is my self pride / So these streets I stride / Like a Black Panther / Asking can the situation get much worse?” (“My City”). Yusef’s Blackstone years also inspired him to create two nonprofit youth literacy organizations in Chicago.

With his second album, Good Morning and Good Night, set to drop this fall, Yusef, 37, is busy touring, keeping his organizations afloat, and spending time with his family. Mother Jones caught up with Yusef as he passed through San Francisco to discuss his new work, how his son inspires him, and Chicago’s current gang culture.

Mother Jones: So you’re in studio now for your new album?

Malik Yusef: Yes. It’s very diverse. I’ve got [N.E.R.D. front man] Pharrell, of course Kanye; I have an array of people, man. It’s going to be 24 tracks, one for every hour of the day.

MJ: How did you decide on that format?

MY: I thought about ancient times when we didn’t have electric light. People were slaves to the ebb and the flow of the light cycle. Good Morning and Good Night represents one light cycle.

MJ: So do the tracks represent this individually? Or is the narrative throughout the whole album?

MY: It’s a narrative throughout the album. Actually, it has 26 tracks. There’s a hidden track on each CD, so that’s 13 on each disc. You know, 13 is the original number of the woman. This is why it’s a bad-luck number. The levels of thinking, the 12 houses of the zodiac, the 13th is governed by the mother spirit and so on and so forth. When patriarchic society took over, it erased all that and killed the mother. I’m more akin to being a follower of the matriarchy, a follower of the old way.

MJ: What is your view of the poet’s role in society?

MY: The poet’s role has changed over the centuries, the ages. The poets, the griots, used to be the keepers of the facts; they were the story tellers, and the stories were allegorically written truths: where we came from, how we migrated over this river, got with this tribe, became this nation, and tamed the mountains. It changed from that to being purely entertainment. And once it became purely entertainment, it lost something.

MJ: So where do you fit along that continuum?

MY: I see myself as the oldest griot tradition of speaking to truth out here. There’s a dark side that people don’t even know is there.

MJ: You recently collaborated on a song with Princeton professor Cornel West. What perspectives did he bring that hip-hop hasn’t seen before?

MY: It was something hip-hop had at one point, but we lost it. He brought in the perspective of rap music as a vessel to get this message out. Everything ain’t about rims and champagne; that’s a distraction. It’s like the Wizard of Oz—pay no attention to the man behind the curtain.

MJ: Going along with that, who—or what—is behind the curtain?

MY: It’s what serves the bottom line. It’s all economic. Soda is easier to sell than orange juice because its costs less. Water, some coloring, some fizz, and this can, and we can sell this to you over and over and over again. And that’s what rap is. They don’t want art that might actually change the community. They just want consumers. They don’t want people to manufacture things. They’ll do the manufacturing, and they just need people to buy it, need youth to buy it.

MJ: Speaking of youth, you have said your son is a major inspiration for your work.

MY: Being a father is the hardest job on the planet, because we don’t have parental instincts like women have. You have to learn how to be a father before you even become a father, from a very young age. It’s necessary to override what we’re told in society a father should be, like if your son falls and scrapes his knee, you got to be tough. Baseball and all that are cool, but it’s the tenderness and interactions that are really important. Boys are different; we have to impart that sensibility and that tenderness to them.

MJ: Do your beliefs about parenting inform your work with nonprofits?

MY: With those organizations, it’s like time travel. I just reach back and find little kids who were like me. Maybe the circumstances vary, but the formula is the same. They’re having problems reading, having problems grasping some of the things that are being taught to them.

MJ: So did your personal struggle with dyslexia feed into your desire to create a literacy foundation?

MY: I suffer from dyslexia. I thought I was a pretty smart kid, but I just couldn’t master this shit. We sometimes stop our kids from reading their environment. You read before you ever go to school, you read your environment, read your interactions with your surroundings and develop a relationship with yourself. The normal kid can differentiate between various aspects of life, but a kid with dyslexia has to connect all those dots, and they have to link it like a chain. Teachers can’t incorporate that. They don’t have time; it’s not their fault. They don’t have the resources to give personal attention to each kid in the classroom.

MJ: What’s the best way to reach these kids?

MY: You got to have dedicated people, a lot of dedicated folk. There’s only so much one person can do. We really have to find people in our community that can give an hour a week. I was recruited because I started gangbanging at 12. I understand the structure; I understand the people inside. I’ve broken it down to three basic types of people in gangs. You have the first type, the most dangerous, which are the glory seekers. They just want to be popular, they want to be stars, and they can do that in gangbanging. Then you have the one that I think is the worst, which is the one that’s expected to be in the gang. His brother, who’s in the penitentiary now, he was the best gang banger we had; now it’s your turn. Those are the ones that were forced into it. Then you have the ones that were like me; they had to be. At an early age I realized that if I wasn’t a Blackstone in this community then I was going to fight every day. And no matter whether I was or not, when I went to school, they’d say, “Oh, you’re from 122nd street? You’re a Stone.” So the only way I could stave off any of these assaults was to become a gang banger, and to excel, so I could quell the behavior. If I excelled, then I could call the shots. So I became a community leader from inside.

MJ: What kids and which gangs do you work with?

MY: A lot of the kids I work with are first generation; their parents don’t speak English. And it’s rough. Because of the language barrier, the parents don’t go into the schools. Those kids like to gangbang, go to the lake and smoke. Little Cambodian gangsters out there in Chicago, they don’t respect anyone older. The Vietnamese, the Flying Dragons, they’ve got a style like the West Coast gangs, the policy that you’re in for life. Administrators tend to lump Asians in Chicago into one group, not understanding that these kids would be fighting each other, the Cambodians and the Vietnamese. We started a thing called cultural gift sharing, where everyone comes and says what his culture is, so the teachers and the administrators could understand they are different.

MJ: As a public figure organizing in Chicago, do you identify with Barack Obama?

MY: I know Obama personally. I’m not going to say we’re friends, but I’ve met him. We have an adversarial relationship. I love Barack Obama—very capable man, strong willed. I have a working relationship with his wife Michelle; we worked on AmeriCorps together. Barack was out in my neighborhoods, in the 100s, putting together programs and organizing. And I got to have respect for him. He approaches things differently from how I do. He’s one of those people who believe America can be okay if we do it from the top down. I’m opposed to that. I think it has to be from the bottom up.

MJ: Are you going to be doing more with Russell Simmons and Def Poetry?

MY: There’s a lot of politics with that show. You can’t really do the poem that you want on HBO, I’ll tell you that. Can’t say nothing bad about Bush or anything like that.

MJ: Do you think it’s possible to break through to mainstream hip-hop and still stay true to yourself?

MJ: How do you reconcile that with working with Kanye and Pharrell, who are definitely mainstream artists?

MY: I let them be them; they let me be me. I’m just a little boy that does poetry whose friends got famous, and I like it that way. I like to be found. I don’t want to be overexposed. I love when people discover me and discover my music.