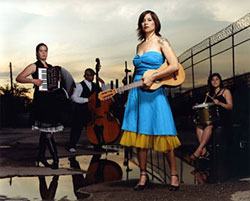 Stand back, shoegazers and head-bobbers: Pistolera is taking the famously apolitical indie-rock scene by storm. The Brooklyn-based, four-piece rock band puts on a show that feels like an outdoor Latin music festival smack dab in the middle of a heated immigration rally.

Growing up Mexican-American in San Diego, Sandra Lilia Velasquez, the band’s founder, front woman, and guitarist, learned early how to live between two worlds. Pistolera is her way of remixing the border culture of her youth with her current fast-paced New York lifestyle. The band’s political message is hard to miss; Velasquez’ straightforward lyrics are unabashedly pro-immigrants’ rights (“The border is only a line that divides us / We all want the same things / To live in peace, without having a Hunter bothering us.”). And along with political chutzpah, Pistolera has something else going for them, too: They’re fun. Awash in Cumbia rhythms, bouncy accordion melodies, heavy walking bass lines, rock guitar, and sing-a-long choruses in Spanish, they’re more dance party than political debate.

I spoke with Velasquez before the band’s recent performance at Café du Nord in San Francisco. Pistolera is touring this spring, summer, and fall throughout the United States.

Mother Jones: How do you feel about the term “world music?”

Sandra Lilia Velasquez: World music is such a funny term, because we are all in the world. World music just implies it’s from somewhere not in America. But, I kind of prefer it to Latin Rock. What does that mean? Sometimes it means that the people in the band are Latino, and playing rock, and singing in English. Sometimes it means playing Latin music with a drum set and an electric guitar. It’s just that the terms are all kind of funny.

MJ: How do you categorize Pistolera?

SLV: If I had to rank in order of my least favorites, “rock en Español” is probably my least favorite [laughs]. I just feel like it doesn’t tell me anything about the music. Just because people are singing in the same language doesn’t mean people sound the same, you know? We don’t sound like Maná. They’re like the Mexican Bon Jovi. They are considered Latin Rock, but we don’t sound anything like them. It’s like with American rock; you have emo, indie rock, hard rock, soft rock. But once you leave the United States, the terms become really general. We’ve been called “Ranchera Rock,” which is almost inaccurate. We only have one ranchero song out of like, 20. The style we pull from the most is Cumbia, which is actually Colombian. But the thing is, it’s so popular in Mexico, that a lot of people think it’s Mexican. But we do have some Norteño in there, too.

MJ: Pistolera has been together for about three years. What was the impetus for you to start this band?

SLV: I’ve always played in bands, ever since high school. I started off playing piano. Then by 13, I hated it, and I wanted to play guitar. So my dad got me a Squier Stratocaster, which was like the cheapest guitar possible. And I learned Jimi Hendrix songs and Nirvana songs or whatever. And then I went to CalArts [California Institute of the Arts] in Los Angeles, for piano actually, and played in bands, mostly keyboards. When I moved to New York, I was so tired of playing keyboards and piano that I started playing guitar, and started writing songs. I felt like I really wanted to do my own thing. I felt like I had reached a point where I kind of knew the sounds I wanted to create.

MJ: Before coming to this band, which music styles did you experiment with?

SLV: Totally rock. If I hadn’t left California, I’d still be playing in a rock band. In New York, I felt really far away from all the sounds I was used to hearing on a daily basis. When you live in San Diego, or even San Francisco, you can’t help but hear Mexican music. You go to a Mexican restaurant and it’s playing from the kitchen, or a car drives by and you hear Banda in the car. You’re looking for a radio station, and you pass the Mexican station. You can’t really avoid it. That was missing when I moved to New York. Because I was missing it, I really wanted to kind of recreate that myself, obviously in my own way, in New York, to make it feel more like home. So I really feel like Pistolera was born out of my longing for the sounds I grew up listening to. My mother was always playing Cumbia on the living room stereo, meringue, salsa, Mexican pop. I took all those sounds for granted, but at the same time, they kind of permeated my brain.

MJ: So how do your New York experiences play into what your music sounds like, since your music is so rooted in your life in Southern California?

SLV: I left San Diego because I felt like no one could get their shit together. Everyone was so relaxed, and everyone was like, oh, let’s have band practice, take a break, hang out. But I’m a very fast-paced person. In San Diego it was an uphill battle with people. But in New York, people there are hustlers, and people there will eat you alive if you don’t keep up, and you’ll end up going back to wherever it is you came from. And it’s like people say, people with brains move to San Francisco; people with ambition move to LA; people with both move to New York.

MJ: How did you put the band together?

MJ: Did everyone have a common understanding of the musical genres you were interested in?

SLV: The accordion and bass player were from California, so they were familiar. No one had studied Latin music, which is something I love. I didn’t want to start a traditional band. I didn’t want someone who would come in and say, “This is how this music should sound.” We’re not trying to create something that’s already been done. Everyone brings his or her own thing. The bass player comes from a blues and hip hop background. The drummer has played in indie-rock bands for 15 years. She plays like a rock drummer. The accordion player was originally a bass player, so she brings her own thing to it.

MJ: You released your last album without the help of a record label. Will you release your next album independently also?

SLV: We just finished recording our new album, En Este Camino (“On This Road”), and it will come out this spring. It’s being shopped around. If someone doesn’t buy it, then we’ll just put it out ourselves. We put out our first record on our own, and it was cool because it charted on CMJ Latin charts, and Latin charts, and you saw all these other bands with their label after their name, like Sony, and Universal, and there was us, as “self-released,” which was cool. People can do that nowadays.

MJ: How do you operate as an independent band?

SLV: All you really need now is distribution. We released on iTunes in the U.S., the UK, Japan, and Australia. It’s funny; it used to be so exciting when your record was in stores, but if no one’s heard of your band, and it’s sitting in a store, why is anyone going to buy some random record? It makes more sense to put your record in stores where you know people are going to buy it.

MJ: You address border issues in the lyrics of a lot of your songs. What’s the inspiration behind that?

SLV: That comes from my being the daughter of an immigration lawyer and activist. My mother is known as “La Flama de la Justicia,” which is the flame of justice [laughs]. I literally call her “Flama” now. I don’t even call her mom. You know, whatever your parents do for a living, you kind of know more about that subject more than other people. Her fight is that of the immigrant, like people trying to help their families, or fighting sex traffickers. Those themes were always dinner table talk, so I was always aware of them. And, I grew up like 12 minutes from the border, so I would go to Mexico for lunch. I took that for granted. Spanish was my first language. When you grow up in a border town, you can’t not be aware of the tension that exists and the racism that exists between immigrants and people that live in San Diego who feel those people are invading their territory. Everyone can feel the friction.

MJ: How do crowds react to your more politically-charged songs?

SLV: They love it. The more political a song is, the more I get asked about it on the radio, the more there is a story to tell. The overall tone of Pistolera songs are of strength. In the end, Pistolera always wins. We don’t have any “poor me” songs. There’s none of that. It’s all from a strong perspective. Like our song about the Minutemen, it just kind of tells them to go home. For me, music is my form of activism. I’m not out in the street organizing, I mean, I just don’t have time. I just had a baby. So I’m with the baby, or I’m with the band. Music is my form of activism, because we bring people together and get them into the words, as well as having a good time.

MJ: Have there been any negative reactions?

SLV: We’ve only gotten one piece of hate mail. Someone wrote me through the web site and said someone was paying me to repeat the babble of the anti-Minutemen or something like that. He was clearly anti-immigrant and felt that people were coming here to take jobs away. So I wrote him a nice long email explaining the reality of the immigrants coming in and really trying to reconnect with families or whatever. So that was one out of hundreds. I’m actually surprised there isn’t more, to be honest.

MJ: What does your mom think about the band?

SLV: She’s a huge fan. Both my parents are. For a while, she was even selling CDs at work, to her clients [laughs].