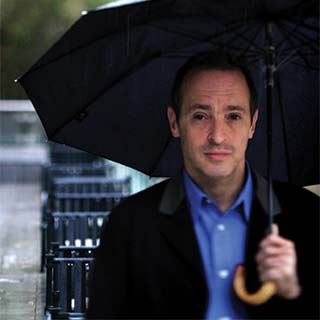 
Last March, The New Republic called bullshit on humorist David Sedaris, accusing him of exaggerating his autobiographical stories. Oh well. Sedaris’ new book, When You Are Engulfed in Flames, is as improbably hilarious as his others, and it doesn’t look like he’s about to apologize on Oprah anytime soon. Sedaris spoke with Mother Jones from his house in London.

Mother Jones: So, do you exaggerate?

David Sedaris: Boy, do I. And if it weren’t for The New Yorker fact-checkers, I’d do it more. I’ve always been up front about that. I think that was what was weird to me about it, was this idea that I had somehow been caught. I had written [in The New Yorker] that my spiders got so obese that their legs started chafing. I talked to the spider expert at the natural history museum, and he said that spiders’ legs never rub together. I said, “No, I know they wouldn’t. I’m just saying it as a joke.” I don’t know how easy [The New Republic] thinks it is to make shit up. To say that a humorist exaggerates to get big laughs, I don’t see how that’s big news.

MJ: Your book includes a story about your experience wearing a Stadium Pal, a hidden device for men who don’t want to use public bathrooms. How many times did you use it?

DS: I just wore it two times. I thought, “Okay, I’m going to wear it for a solid week.” Taking it off hurt so much that there would be no way that you could torture your skin like that, there would be no way that you could put it on and take it off every day for a week. There’d be nothing left down there. One of the days, I wore it doing a reading in a bookstore. So my calf got bigger and bigger and bigger, and my brother kept kicking me. His whole mission was to break that bag so that I would have lots of urine on myself.

MJ: When did you feel like you were a writer? Did you have an “aha!” moment where you said, “I’m a writer”?

DS: When my first book came out and I was living in New York and there was a bookstore around the corner from me and they had my book in the window, I thought that looking at my book in the window would make me think that I’m a writer. It just made me think, “I have a book.” It wasn’t a bad feeling. I realized, “Oh, having a book doesn’t mean you’re a writer; it could just mean you’re lucky.” Maybe when I started writing for The New Yorker, because to me, “writer” was always a pretty big word, and I always thought, “Okay, if I’m calling myself a writer, what does that mean for people like Flannery O’Conner? Now that’s a writer. I’m just a typist.” I would call myself a typist and whenever they would ask my occupation on an immigration form going to another country, I would write, “Typist.” I think sometimes, “Well, gosh, if I wasn’t a writer I probably wouldn’t be in The New Yorker.” You know, when I get down on myself I think, “Well, I’m in The New Yorker. That’s okay.”

MJ: In your essay “The Monster Mash,” about how you worked in a morgue, you discuss that many people actually die from autoerotic self-asphyxiation. I didn’t realize how often that happens.

MJ: On your speaking engagements, do you feel okay to bomb every once in a while?

DS: I think it’s important to be upset by it, because you just let people down and they bought tickets and they paid to come see you. I think it’s important to take chances. But there have been nights—whenever I go on tour I start with six or seven stories and I read them out loud and I go back to the hotel and rewrite and read and rewrite and it’s pretty rare for me to be completely wrong about a story—I could be completely wrong about my audience and read the wrong thing in front of an audience. And I could be off. But I think to be off like that and to think that, “Oh, I had an off night, and just leave it at that”—I really kind of beat myself up over it because I don’t want to make a habit of it.

DS: Oh, very. I make notes on the page when I’m reading, and I put big check marks next to what gets a big laugh and if there’s something that I thought was going to be funny and nobody responds to it at all then I draw a quick skull and cross bones or just the skull part in the margin. There have been times, too, where I’ve read something once and then I want to throw it away, but then I’ll think, “Well, often it just takes time to learn how to read something.” The difference between the first time I read something and the tenth time I read something is generally pretty profound. Even if the script is the same, just the way that I read it is different. Sometimes you can get your biggest laugh by just looking up. The problem is you can’t duplicate that on the page. Or if you’re reading out loud sometimes you could change your voice or I could give a different character a voice, but on the page the people reading the story, they’re not going to see that. I worry about that sometimes; I worry that when I go on tour that I’m perfecting the story orally, but not for the page.

MJ: You write about your boyfriend Hugh a lot. Do people ever want to meet him?

DS: If there’s any guy standing behind me people will say, “Is that Hugh?” And I’m like, “Do you think he has nothing better to do than to travel around with me and stand behind me while I sign books?” One time, though, there was a beefy Puerto Rican security guy, very stern and very tough, so I told everybody that was Hugh. I could see how irritating that was for him, because here’s everybody thinking that he’s gay and that he’s my boyfriend. But his job was to protect me, not to kill me. So there was nothing he could do about it.