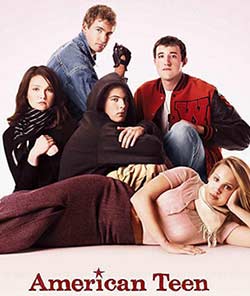 Post-Breakfast Club, post-Dazed and Confused, post-Mean Girls, post-Juno—heck, post-High School Musical—you’d think there wouldn’t be anything left to say about the typical American high school experience. So when we heard about American Teen, a new documentary directed by Nanette Burstein (The Kid Stays in the Picture), we had our doubts. How could real-life jocks, band geeks, popular girls, and misfits from Warsaw, Indiana, say anything that hadn’t already been said by Molly Ringwald, Anthony Michael Hall, Ellen Page, and Lindsay Lohan?

The documentary American Teen, a runaway Sundance hit, follows five teenagers through their senior year of high school: Megan Krizmanich, a blond athlete and student-council superstar with her heart set on Notre Dame; Colin Clemens, a basketball star whose future depends on a scholarship; Hannah Bailey, an arty guitarist who dreams of California; Mitch Reinholt, another affable jock who’s more interesting than his peer group might suggest; and Jake Tusing, an acne-scarred, video-game-playing nerd who wants nothing more than true love. The plot meanders through their emotional ups and downs, breakups and makeups, with a few asides for the standbys of teen drama: the girl who’s humiliated when Megan forwards topless pictures of her to everyone at school; Jake’s first night of wild partying; Mitch’s foray into an “alternative” social world when he develops a crush on Hannah.

Though they fill somewhat stereotypical roles, the teens most likely weren’t exaggerating for the camera—film crews followed about 15 kids for the whole year, and the chosen 5 didn’t know they were the stars until the night before the premiere.

Three MoJoers went to see a sneak preview last night—including a Q&A with the cast, now all in college—and since we couldn’t shut up about it last night, we thought we’d sign on to Google Chat and analyze it some more today.

Kiera: So which characters did you find most sympathetic?

Casey: The obvious choices for sympathetic characters are Hannah, the rebel and Jake, the dork. You’re just dying for Jake to go to college and come back incredibly cool. But I also found Colin to be very sympathetic. It was obvious that the pressure of succeeding as a basketball star or being shipped off to Iraq affected him—he couldn’t see any other choices.

Kiera: How about Megan the queen bee?

Casey: I didn’t find her sympathetic at all in the movie, more so during the Q&A afterwards. I’m sure she gets booed at a lot of these screenings. She’s not very far away from the person she was in high school, but suddenly she’s getting this totally objective view of herself from auditoriums full of strangers. It must be humbling.

Gary: Also, her bitchiness didn’t completely eclipse her own insecurities and sensitivities. If anything, her manipulative behavior kind of magnified them.

Kiera: So, did you guys see any of your own high school experience reflected in the film?

Casey: Some. My high school was relatively rural and didn’t have cliques in the same way that theirs seemed to. But Mitch, one of the jocks, reminded me of a high school friend of mine, a really sweet, smart, hilarious kid who would veer out of the mainstream only to swing back in at the last minute. And I won’t lie—I spent a whole lot of time gazing out over bodies of water after emotional breakups.

Kiera: Yeah, my high school experience was really different from the movie since I went to a tiny all-girls school, but everyone’s old friend Angst was certainly at my school, too. And remember the part at the beginning where Hannah just couldn’t bring herself to go to school? I probably missed 10 Mondays senior year, since the whole idea of getting up, going in, sitting through class, and negotiating horrifying social situations just seemed totally unbearable.

Gary: It reminded me of my high school a little bit. The only thing missing was the smart-ass freshman getting thrown into a garbage can by a senior for mouthing off to him. Oops, that was me!

Gary: I actually kind of took pride in my garbage can moment. When your town is surrounded by cornfields, even garbage cans can be exciting.

Kiera: Wow, I feel like I missed out on so much. All the cruel behavior at my high school was much quieter. There were a lot of steely glances. You know, Boston blue-blood style. And speaking of cultural differences, let’s talk about the fact that the movie was set in Warsaw, Indiana—a very white, middle-class suburb. Haven’t we seen enough of that already?

Casey: It’s a problem with the way our culture thinks of a teen movie. It’s either about “normal” teens—white, suburban, middle class—or it’s about “being a misfit in a normal situation”—if the film had focused on the one gay kid, or the one black kid. The other option is the opposite extreme: “teenagers in the Inner City, and their Hard Lives.” You could never market a movie set in an urban high school, even if demographically mixed, as an “American teen” movie. To have that you need cars, diners, white people.

Gary: I think most teens have a hard time seeing beyond what’s right in front of their face, whether they’re in the inner city or in the suburban Midwest.

Kiera: How about that whole debacle during the Q&A session, when one audience member asked whether there were any openly gay kids at Warsaw High, and what their experience was like? Talk about a tough crowd. The American Teen kids couldn’t say anything right. For starters, Megan said she thought Warsaw High was a great place for gay students, “because they have a club.” That got some snickers.

Casey: That was probably as hostile as crowds get, as far as that topic goes. But it was really clear that even though those kids didn’t have a clue how to talk about queerness, they were all really adamant about emphasizing that they thought it was fine to be gay. Which I thought was really sweet. It seemed really important to them to show everyone that they weren’t closed minded or prejudiced, even though they didn’t have a lot of experience with the issues.

Kiera: Right. At the end Megan realized that the crowd sort of disagreed with the whole “being gay is a personal preference” thing, which was interesting to see.

Gary: Gotta give them some credit either way for standing up in front of an audience and discussing any aspects of gay/lesbian culture when obviously none of them seem to have any real understanding.

Kiera: So did the movie hang together for you guys?

Casey: I could have done without the animations. Though I’d be curious to know how much of a hand the kids had in putting them together. I’d feel differently if they’d made them, or at least designed/described them, themselves. My guess is that they probably didn’t make them, since they apparently didn’t even know they were the stars of the film.

Gary: I actually didn’t mind those animations. They were a little forced and cheesy, but it kind of broke things up a bit and added some humor. The bit about Notre Dame was pretty funny.

Kiera: Right. When Megan was fantasizing about Notre Dame and describing it basically like it was the Garden of Eden or something. How do you think the director got her to say all that? I mean she must have realized how silly it sounded.

Casey: Maybe, but maybe not. One of the biggest things that excited me about the idea of college was meeting lots of different kinds of people, from lots of different backgrounds. I’m sure it sounded cliché when I talked about it.

Gary: Like when Jake talks about how going to college meant he could be “Mr. Muscles” if he wanted to, or “party guy.” I had similar thoughts right before heading off to college; like “the world is my oyster” kind of thing.

Casey: It would be interesting to read a magazine article about the filming of the movie…like, if a reporter had been following around the director and the kids to give you more of a sense of what this whole bizarre process is like.

Kiera: The kids said that they eventually forgot that the cameras were there—and that was because the director was like a friend/mentor to them. That would be really hard. How do you even begin to make teenagers trust you, let alone become their friend?

Casey: Some of it is caring. It sounds like Nanette [Burstein] gave all of the teens a lot of personal attention. None of their parents seemed really emotionally supportive. Often their friends were unavailable, and the teachers and counselors at school were horrifying. To have a sympathetic adult who’s literally made it her job to care about every tiny event that happens in your life—that has to make a difference.

Gary: I wondered if being filmed in high school might have made certain transitions easier, or different. They didn’t see any of the footage till well after they had graduated, but some good self-reflection during your freshman year couldn’t hurt.

Kiera: All of them seemed like they had grown up a little bit since the movie. I mean, the fact that Jake inexplicably took his shoes off onstage notwithstanding.

Casey: I’m in awe. I’d be hiding in a garbage can.

American Teen comes out in theaters nationwide in early August.