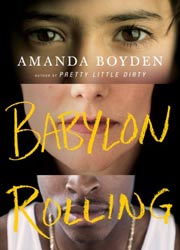 It is possible that New Orleans is the perfect setting for the post-9/11 American novel. New Orleanian Amanda Boyden seems to think so, and her new book Babylon Rolling is her attempt at illustrating an essential quality about the current state of American culture: chaos. The city’s fusion of unpredictable diversity, events, and weather serves as a caricature of our fears about our country’s future.

Babylon Rolling reveals a slice of pre-Katrina New Orleans triumph and tension by illustrating a year in the lives of an Uptown street’s inhabitants. Ed Flank and Ariel May have recently relocated from Minnesota with their two young children. The Guptas, an Indian family, are the most recent arrivals to the neighborhood. Sharon and Nate lead three generations of an African American family, with daughters who are young parents themselves and sons who deal drugs. Cerise and Roy Brown are the most elderly couple in the neighborhood. Philomenia Bauregard contends with the disparity between her old-fashioned, upper-middle-class upbringing and the new diversity of her neighborhood.

The plot is filled with natural disasters, domestic struggles, neighborhood disputes, accidents, and violence. The rate at which these crises occur fill the novel with a sense that nothing is predictable, except for the reality that change is constant and often unpleasant. Some characters refuse to or are incapable of relinquishing their control. Midwesterner Ed Flank is shocked by the youthful exhibitionism by which he suddenly finds himself surrounded. He does not want his young children to see, let alone become a part of, the loud and oversexed scene, but he can’t prevent them from trying on the language and style of their new city. Philomenia can’t adjust to a world in which every situation no longer comes with a prescribed decorum, and attempts to destroy the neighborhood student bar, destroying herself in the process. Other characters who are more malleable learn to cope: Cerise, though she doesn’t understand the new century, accepts it and emerges as the neighborhood seer. Sharon takes for granted her family’s dysfunction to the point where she can help Ed’s wife Ariel deal with that of her own.

Eight years ago, America felt more confident about itself, about its place in the world. In our static, we resisted admitting things were out of control until we couldn’t anymore. Like the characters in the gorgeous and tactile Babylon Rolling, our survival hinges on our ability to cope with the lack of a universal culture and common body politic, the truth that natural disasters and random violence are a fact of life. New Orleans is a larger-than-life American city, one that already experienced its own apocalypse and is struggling to thrive in the social and environmental chaos it left behind. Like all Americans after 9/11 and in the future—after Katrina, after the war, after whatever comes next—no one in Babylon Rolling will emerge completely unscathed from the mess. But to emerge at all will require a spirit strong enough to embrace unpredictability, to constantly readjust, and roll on.