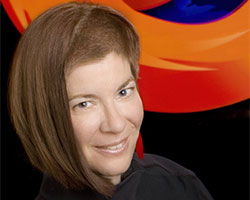 Among geeks of a certain bent, the chance to give the fig to Microsoft is reason enough to love Firefox, Internet Explorer’s feisty, anarchic rival. But Mozilla, the software experiment that produced the free open-source Web browser and sundry communal projects, heartens feminists as well as fans of the Electronic Frontier Foundation.

Winifred “Mitchell” Baker, chair of the Mozilla Foundation and former CEO of Mozilla Corp., is the leading lady of the Web browser shows. Whether or not she’s Bill Gates backwards and in high heels, as a tech leader she sure can dance. This year’s Firefox update set a Guinness World Record for the largest number of software downloads in 24 hours; Time has called Baker one of the most influential people in the world. But the woman once known as Mozilla’s “Chief Lizard Wrangler” is almost as well recognized for her reddish swoop of hair, strikingly similar to the Firefox logo, as for her leadership cred. Baker sat down with Mother Jones at the BlogHer conference in San Francisco to talk about Silicon Valley sexism and Mozilla’s future, and was briefly rendered speechless by question No. 1.

Mother Jones: How does it feel to be a geek sex symbol?

Mitchell Baker: [Laughs.] I didn’t know that I was! [Long pause.]

MJ: Is this the first time you’ve gotten that question?

MB: Yeah! Is that the case?

MJ: Yeah. I know programmers who would die to do this interview.

MB: I see. Uh…The sex symbol thing’s a little bit different for me. Usually, like whenever there’s a picture of me, there’s always this set of things that comes out like, ‘Oh my god, she’s so ugly.’

There’s something about being a woman in a technology space, unless you happen to be model beautiful, where there’s always, always talk about what you look like.

But most of us who aren’t models aren’t models, right? And so, you just have to get used to that and sort of read right past it. So. On the sex symbol piece, I don’t get that piece. On the personality piece, that people are excited to meet a leader from Mozilla—maybe there’s more about meeting me personally than I give credit for, but I find that people are excited about what Mozilla is, more than ‘Oh my god, there’s Mitchell, look, her hair,’ whatever.

MJ: You’ve said that Mozilla is “trying to build an Internet we want to live in.” Where do fancy phones fit into that world?

MB: I’m excited about mobile; clearly that’s important. Mobile devices are kind of at the opposite end of PCs, in that PCs are pretty open and you can do a fair amount with them, but many mobile devices aren’t. We’re excited at the idea that we can make the same kind of contribution in the mobile space. So that’s one thing coming down the pike.

We’re also looking a lot at graphics and video. We’ve done a lot on a deep technical level to make sure that the next version of Firefox will have all sorts of new graphics capabilities. And the move from audio to video is just exploding. So those areas in particular, mobile and graphics and video, are really important to making the Web today and tomorrow as open as it can be.

MB: We should probably figure out a new word for this. For us, “open” means transparent, as in “open source”—you’re not locked in to what the original creator did. And in our case “open” also means distributed decision making. So many commercial orgs have software where you can come and modify it but they still control everything. And what’s controlled is very clearly what’s good for their business, or if they’re more progressive, their view of what’s good for the Internet. Our sense of “open” is that the authority to make decisions about that gets distributed based on merit and understanding and participation and leadership, not solely on employment or a title or a business plan. Technical colleagues will define “open” as “open standards,” “interoperable”—you can find it, search it, cut and paste it, view source, mix and match—all those things that we associate with text on the Web, that you can continue to do that with audio and video and whatever’s next.

MJ: You are a role model for a lot of women. Do you have any advice for women in leadership positions in traditionally male industries?

MB: What’s been most helpful to me is realizing that those times when all the heads in the room turn and look at me as if I was crazy, reinforce my own leadership capability. Because I’ve been in a number of those settings where I’ve been right. And I’ve been right often enough that now when it happens I don’t automatically think, “Oh, my, what’s wrong with me?” or “Ohhh, I must not be ready for this role,” or “They know so much more than I do.” I mean, that’s all still possible, but it’s equally possible that I’m ahead of the curve here. And maybe I can rephrase it for them, or maybe I’m just seeing something that they’re not.

Just to have the confidence to say, “Which end of that spectrum am I usually on?” That’s been very helpful to me. Because it’s a really awkward setting. Usually, you know, you’re at a table and you’re the only woman, you’ve got this idea, you finally speak up—I mean, I’ve been in some settings where every head turns toward me and then they all turn away as if I’ve never spoken. Which I think happens when whatever I said was so out of the blue, or so awkward, that they just didn’t know how to respond. And yet, some period of time later you look up and say, “That concern was right on the mark; it happened exactly as I thought it would.” So that’s been really helpful to recognize.

I guess my other advice is that it’s really good to be comfortable among groups of men! It’s just a very common work setting and I don’t actually think about it too much, but there must be some comfort level that I’ve developed over the years.

MJ: Do you have like four brothers or something?

MB: No, a half-brother. I grew up as an only child. I think it might just be that my dad really didn’t care that I was a girl. “You’re gonna do certain things ’cause I want you to, and that’s the way it is.”

MJ: Last question. So you have trademark Firefox hair…

MJ: But now that you’re known for your hair as the firefox, does Mozilla keep a stylist on retainer or something to make sure you don’t stray? I’m sort of kidding. You’re shaking your head. Okay, who cuts it?

MB: A very down-to-earth, wonderful woman in Redwood City who does what she likes with the back and shows me afterward.