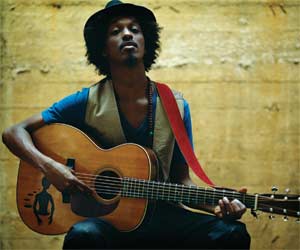 Update: After learning that Mitt Romney played his song “Wavin’ Flag” at his Flordia primary victory rally, Canadian-Somali musician K’naan announced his displeasure via Twitter: “Yo @mittromney I am K’naan Warsame and I do not endorse this message.” He asked Romney not to play the song again (but said Barack Obama was welcome to); the Romney campaign reportedly has agreed. Mother Jones interviewed K’Naan shortly before his album Troubadour, which includes “Wavin’ Flag,” was released in 2009.

K’naan‘s music sounds a little like Eminem’s, if Slim Shady had spent his childhood dodging bullets in Somalia’s civil war. The 30-year-old hip-hop artist (born Kaynaan Warsame) grew up on the mean streets of Mogadishu and escaped in 1991 on one of the last commercial flights out of the country. Now living in Toronto, he’s just released his second studio album, Troubadour, an addictive blend of African-jazz-infused ballads and rhymes about everything from Somali pirates and the immigrant experience to Iraq. Having survived “the most dangerous city in this universe,” K’naan says he can’t separate his music from his past. “I don’t have the luxury of ignoring myself,” he says. His honesty has resonated with other musicians; he’s collaborated with Damian Marley and Maroon 5’s Adam Levine, and Mos Def has joined him onstage. K’naan talked to Mother Jones while sitting on a bus on his way to a show.

Mother Jones: You said goodbye to Somalia when you were 13 years old. How does your childhood relate to your music?

K’naan: It’s kind of the primary influence. The only way I see the world now is through coming out of and growing up and living in Somalia. In the time of war, everyone was basically trying to live and manage the best they could. But you also had another period which was not a hard time at all—it was just a beautiful time. I lived in both eras. I got to fully experience and appreciate both the tragedy of Somalia and the beauty of it.

MJ: In your music, you talk a lot about being a kid in a war zone. In “People Like Me,” you say you “partook in the gun crimes” and mention a “close call with a grenade.” Did you fight in the war?

K: The idea of child soldiers is different in Somalia. There is no real military to join, nor are there any consistent rebel groups. There is just war. And it’s everywhere; in the hands of adults and in the little hands of children. It is the very survival of the streets that makes children pick up guns in Somalia, not some older, wide-eyed rebel leader. My intimate experiences during these years are something which I have shared with people through my music but am very careful about how they are addressed. I learned to fire guns at the age of nine or so, but luckily was not out killing people. We zigzagged the streets to escape those trying to kill us. I guess it would have been a matter of time till I turned around with a gun myself, to go after those coming for us. But I was fortunate. The grenade incident was about an explosion which destroyed a section of my school, from a grenade that me and my cousin detonated by accident. We both lived to tell about it.

MJ: When you were growing up, were you aware of American hip-hop?

K: Very limited stuff—this one album by Eric B. & Rakim called Paid in Full. That was my first and last interaction with hip-hop until I got to North America.

MJ: Is there Somali hip-hop?

K: No. Somalis really are very musically sophisticated, and they’re about their own thing. They’re not very quick to import.

MJ: What do you think about the situation in Somalia right now?

K: It’s horrific. The UN recently said that it’s the worst humanitarian disaster in the world, more so than Darfur. What can I say, man—it’s a sad situation. It was great to have the fortune to escape what was happening in the country. Of course, the flip side of that is that you’re leaving everyone you love, and you’re leaving the place you love and the things you know.

MJ: How do you feel when people turn Somali pirates into a joke?

K: Well, the pirates are serving a purpose right now. They come from regions which have been completely ignored, and Westerners have tried to destroy these regions by their constant plundering of resources and by the illegal dumping of nuclear waste. The pirates really began in order to discourage these actions—initially. And then the business became lucrative. So I don’t know what to tell these people who want Somalis to condemn them. One man’s pirate is another man’s coast guard.

MJ: You make fun of rappers who have a thug posture. Don’t you think that what people are going through in Oakland and New Orleans and Queens is hardcore enough?

K: I guess it’s hardcore enough—for them. The truth is that everyone’s struggle is legitimate. I understand those ghettos; I’ve lived in them. But there are, in fact, more severe struggles.

MJ: Have you gotten any flak from other rappers about that stance?

K: Actually, rappers understand that more than a lot of people. The same rappers who are the glorifiers of it all, when faced with reality, are like, “Yo, man, you’re right. It’s the truth.”

MJ: So why this obsession with glorifying violence in hip-hop?

K: I think a lot of it has to do with marketing groups, statistics—what works and what doesn’t. If peace began to sell, that would be the norm. But right now the consumer is getting really smart. Extreme exposure no longer equals selling records, which I think is a very good scenario for music. Not so much for record labels.

MJ: In “15 Minutes Away,” about making a money transfer back home, you say, “Generosity is the key.” Are you taking a stance against rappers like Kanye West and Cash Money Millionaires, who brag about how much their jewelry costs?

K: It’s just how I feel. These guys are very hungry for opportunity, and they really try to expose themselves. But I just think that sometimes that might not be the most important thing in the world. I’m not about trying to get and get and get. I feel good when I get, but I kind of feel better when I give.