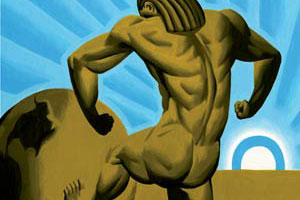 LAST OCTOBER, three weeks before the election of Barack Obama, Helen Smith decided she’d already had enough. A forensic psychologist, wife of so-called Blogfather Glenn “Instapundit” Reynolds, and herself a blogger for the conservative Pajamas Media network, Smith liked what she’d heard from Joe “the Plumber” Wurzelbacher, who had questioned candidate Obama’s plan to repeal the Bush tax cuts for people making more than $250,000—despite being in no danger of earning anything near that much himself.

Something about the semi-employed, blue-collar media darling reminded Smith of John Galt, the mysterious industrialist hero of Ayn Rand’s 1957 novel, Atlas Shrugged. Fed up with the federal government’s confiscatory economic policies, Galt urged his fellow “producers” to go on a “strike of the mind” to starve the “looters” who were redistributing wealth to the “moochers.” Smith asked her readers to come up with ways to “go John Galt”—that is, “cut back on what they need, make less money, and take it easy so that the government is starved of funds.”

Since then, “going Galt” has become, as the Cato Institute’s Will Wilkinson quipped, “a certain kind of libertarian-conservative’s version of progressives threatening to move to Canada.” After all, if right-wingers are no longer in a position to shrink government to the point where, as Grover Norquist once proposed, they can “drown it in the bathtub,” they can still take their rubber duckies and go home.

Rush Limbaugh, Michelle Malkin, and California Rep. John Campbell have endorsed the virtues of dropping out. C. Jeffery Small, the founder of go-galt.org, one of several hastily designed Galt-themed websites, has urged patriots to put the “fear of Galt” into members of Congress by burying their offices in copies of Atlas Shrugged. Small initially resisted sending the books through the post office, “it being a government agency,” but decided it was okay to go postal when his wife pointed out (falsely) that the USPS loses money on every item it handles, making the book bombardment a “covert ‘John Galt’ action to help further bankrupt the government.”

For paranoid free-marketers, the plot of Atlas Shrugged captures our current moment with spookily prophetic accuracy. Over the course of the 1,000-plus-page epic, the US economy collapses as the government imposes restrictive regulations with magnificently absurd titles such as the Anti-dog-eat-dog Rule. The rich, led by Galt, revolt and head to the hills (actually, a valley called Galt’s Gulch). In the final scene, having defeated the looters and moochers and delivered a fiery 56-page monologue in defense of capitalism, Galt gets his reward in the form of luscious railroad magnate Dagny Taggart. As the lovers bask on a mountaintop, Galt draws the symbol of the almighty dollar over “the desolate earth.”

In a moment when predatory bankers and arrogant CEOs have been revealed as the real looters and moochers, could there be a less likely folk hero than Galt? And could there be a less relevant economic guru than Rand, whose Objectivist philosophy equated unfettered capitalism with absolute morality? Yet Rand has never been more popular. During the first four months of this year, sales of Atlas beat 2008’s record, when 200,000 copies flew off shelves.

A Russian émigré who came to America hoping to work in Hollywood, Rand rejected communism but adopted its utopian, dominating aesthetic. (Her reverence for capitalism was so great that at her 1982 funeral, a 6-foot dollar sign was placed next to her coffin.) The heroes of her novels were the people who designed buildings and railroads, managed finance and industry—though Rand herself produced little more than words. Her books have often been met with dismissal, if not outright scorn, by many who write and read for a living: When I emailed a handful of fiction writers and book review editors for a piece I wrote on Rand a few years ago, 100 percent of them worked the word “asshole” into their responses.

Rand’s bombast has always held more appeal among would-be Masters of the Universe than bookish parasites. Perhaps the best-known member of Rand’s inner circle—officially, and perversely, dubbed the Collective—was a young economist named Alan Greenspan. As the head of the Federal Reserve for two decades, he embraced his mentor’s belief that markets work best when corporations are free to pursue their own selfish interests. We know how that story ended. Other avowed Rand fans include Hugh Hefner, Clarence Thomas, and Wikipedia cofounder Jimmy Wales. Angelina Jolie and Brad Pitt are rumored to be involved in a film version of Atlas, though it’s unclear what draws the Hollywood do-gooders to a writer who famously rejected the “morality of altruism.”

Objectivism’s tendency to attract unlikely fellow travelers is also evident in the grassroots elitism of the Go Galt movement. For starters, Rand, a pro-abortion atheist whose characters scorned monogamy and procreation (as did she), had little in common with most conservatives besides her hatred of Big Government. And she had little use for mainline libertarians, whom she disparaged as “hippies of the right.” Not to mention that the Galters are trying to build a populist movement around a character who fundamentally opposed populism in all its forms.

This contradiction has forced the Galters to improvise. Some have combined survivalism with what resembles a small-is-beautiful, progressive ethos. One Malkin reader reports, “I’m no longer buying retail, driving out of a 10-mile radius, spending money on eating out, and am no longer putting my money in a savings account. I am using the money to pay off all of our debt.” A commenter on the Going “John Galt” website suggested that going Galt might mean planting a garden. (“You obviously don’t pay taxes on tomatoes you grow.”) Could some Galters be going green without realizing it?

Helen Smith also seems thoroughly confused about what constitutes the phenomenon she first identified. She’s written approvingly of a commenter who thought that stiffing waiters to “redistribute” tip money to the homeless was a sensible way to deprive the government of revenue. When she spotted more middle-aged men hanging out at her local spa, she took that as a sign that the producers were starving the beast by slacking off. It’s hard to imagine Galt plotting revolution from a sauna. But then, Smith admits that she had to consult CliffsNotes to refresh her memory of Rand.

Of course, if taken to its logical extreme, going Galt means embracing a situation commonly known as unemployment. Presumably, very few of the 13.7 million Americans who are out of work are so out of allegiance to Rand. So far, none of the most vocal Galters have taken that committed step. The creator of goingjohngalt.org took a break from blogging about the benefits of withholding one’s contributions to society to put up an ad seeking work as a programmer.

The reason that few—if any—of the Galters have actually followed through with their threat to let the system stagnate without their contributions is that most are not exalted producers who run “the motor of the world.” They’re not Galts nor moochers but ordinary Americans (and a few loudmouth pundits). Like Joe the Plumber, they suffer from the delusion that by identifying with people more powerful than oneself, one might magically become them.

Rand’s particular genius has always been her ability to turn upside down traditional hierarchies and recast the wealthy, the talented, and the powerful as the oppressed. This topsy-turvy philosophy has echoed through the blame-the-victim ranting of CNBC host Rick Santelli and the tax-day tea parties. In this world, it is not possible to admit that the rich and the Republicans may have been undone by their own greed and cluelessness. Instead, the Galters have rewritten the story of how we got here with a dash of idealistic fantasy and a side of empty rebellion.

Yet as the initial enthusiasm for going Galt has faded, the idea has proved a convenient way to explain just about any economic indicator that seems not to be going Obama’s way. The ever-reliable Instapundit speculates that the frozen credit markets have in fact gone Galt; another blogger attributes falling federal tax revenues to Americans emulating Galt (not losing their jobs and investments). From the bottom of Galt’s Gulch, collective misfortune has been spun into a triumph of the individual.