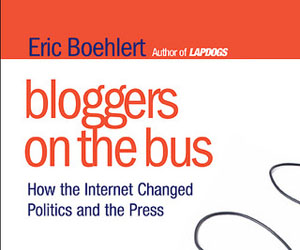 For more free Mother Jones podcasts, subscribe here, or in our iTunes store.

Eric Boehlert is the author of Bloggers on the Bus: How the Internet Changed Politics and the Press. He’s also a senior fellow at Media Matters, and an award-winning journalist who has written for Salon and Rolling Stone. Currently, Boehlert writes about blogs and their rising influence on politics and journalism. Ben Buchwalter spoke with him about bloggers of a certain age, whether liberals have been too easy on Obama, and the future of the Netroots.

Mother Jones: How do you think the netroots has responded to the Obama administration so far? Have they been too supportive or too critical?

Eric Boehlert: I think they’ve been doing a really good job. They’ve split their time up into three activities. 50 percent of it is just playing defense against the unhinged right wing response on how Obama is a socialist and a Marxist and he wants to take your guns. 25 percent is trying to prod and cheerlead when the administration does something that it likes and that it approves of or maybe has a liberal flavor to it, and the other 25 percent is critiquing the administration. We’ve seen it on war funding, we’ve seen it on gay marriage, we’ve seen it on wire tapping. I think there was this notion, particularly among the conservative critics, to say, ‘well Obama is elected, and bloggers are going to roll over and they’re just going to be a mouthpiece for the administration.’ But that’s not what happened and I never thought it would because the blogosphere was never created to be an appendage to the DNC or to cheerlead Democratic politicians. It was always created to give a voice to liberalism in America. Liberal bloggers are still going to do that. I mean, they’re happy that a Democrat is in the White House who’s more receptive to their priorities and their agenda, but they’re not just going to stop because a Democrat is in the White House.

MJ: In Bloggers on the Bus, you profile a few bloggers who you seem to admire. What common traits do the most interesting or vibrant bloggers possess, and what blogs are you reading now?

EB: It’s interesting, the stories I enjoy telling were bloggers who really didn’t fit the classic caricature of a liberal blogger. The idea of someone right out of college with a laptop and black glasses and a beard typing away was never really accurate, but I think it got pushed in the press. I found, instead, people like Mayhill Fowler, who was a campaign correspondent for “Off the Bus” project last year. She’s the one who broke the “bittergate” story and she’s the one who broke, on the last day of the campaign, Bill Clinton going off on a Vanity Fair reporter on the rope line. She’s in her sixties, she’s a mother from the Bay area who had no connection to politics or journalism prior to the last campaign. People like Howie Klein who runs Down with Tyranny, who’s been very helpful in terms of getting funding for some of those insurgent Democrats. Those very liberal candidates who want to run for Congress. Howie used to be a record company president – Reprise Records – he had a very long and distinguished career in the music industry and then he turned 60, and decided that he wanted a second life and that it would be blogging. One other one that I’ll mention real quick is John Amato, who created Crooks and Liars in the summer of 2004. John was playing saxophone with Duran Duran as his last job before starting Crooks and Liars, which revolutionized blogging and liberal blogging by introducing video into the content. And of course this was pre-YouTube, when it was impossible just to get snippets of a TV show and put it on your blog. John cracked the code and was able to do that. John turned 50 during the campaign last year. So I enjoy telling the stories of people who had more of a life resume and came to blogging later in life and brought with them this unique perspective and unique talent that otherwise, without the Internet, never would have been tapped in to.

MJ: You write in Bloggers on the Bus about Timothy Crouse’s book The Boys on the Bus, about the press reporting on the 1972 campaign. What has journalism gained in the past 35 years and what has it lost?

EB: It hasn’t gained much in terms of quality. I think it’s lost the absolute fundamentals of who, what, where, when and why. Campaign reporting in particular is a shell of what it used to be. If you look at the campaign coverage of the general election, the press really no longer does policy at all. During September, October, and November of last year, there was virtually no discussion whatsoever in terms of the agendas or priorities or policies of a possible Obama presidency or a McCain presidency. It was all just polling and gotcha stories’ and trivia. Campaign journalism used to be the pinnacle of the industry, where reporters and producers and pundits would really shine with insights. You would be hard pressed to find any mainstream reporter or pundit from the 2008 campaign that in any way singled himself or herself out with their coverage of the campaign.

What it’s gained is mostly technology and obviously it’s a completely different game. Reporters were writing a deadline for once a night in 1972 and now people are forced to meet almost hourly deadlines during campaigns. So it’s much more immediate with the Internet and the blogosphere. It’s a much more two way conversation and the gates have been taken down in terms of the Beltway insiders who in the past were tapped to be sufficiently sophisticated and educated enough to explain to the rest of us how politics works. That’s no longer the case, people can figure it out for themselves.

MJ: Writing at “uncertain future.” I was a little surprised to read this, so I wanted to ask: Do you think that progressive blogs are in danger of extinction? And if so, what would replace them?

EB: I am trying to remember the exact context. I might have been talking about the economics, which frankly are pretty awful. When you think about the extraordinary growth and influence of the liberal blogosphere and what it’s been able to do for progressive politics in the last decade, it still literally has no foundation whatsoever. It really is run on passion and adrenalin and some blog ads that trickle in. Yes, there are a handful of sites that are very well run and they make money and can even hire people. But the vast majority of the voices within the liberal blogosphere do it voluntarily, or what most people would consider voluntarily, meaning very low income. And they do it at night and on weekends. Conservatives have always done a much better job in terms of spending money and building an infrastructure. And here progressives and liberals have really for one of the first times completely sprinted ahead of the conservative movement and grabbed this important piece of real estate online. But there has been no real institutional spending to support it. And everyone thinks it’s great and everyone thinks it’s effective and everyone loves it, but there aren’t many people writing checks to support it. I think the other aspect that I was talking about, in terms of its growth, is the blogosphere has been blessed and cursed with the Bush presidency. Cursed because they detested basically everything he did, but blessed because it was an incredibly unifying force, the Bush presidency and the War and things like that. So once Bush was subtracted from the equation, then yes, it is probably much harder to grow the movement without Bush, without Republicans in control. That might have been another meaning of what I said in terms of its “uncertain future.”

MJ: I’ve been working on my own political blog for a little while now. Do you have some advice for other small time bloggers like myself?

EB: It’s tough. It’s tough. I think it’s great in terms of having an outlet and having a voice, and everyone wants to do that. I now blog at Media Matters, which is a different thing because it’s part of my job and I don’t have to do it late at night for free, but I’m also sure that anyone who blogs and says they don’t care about their traffic is not being honest. Everyone wants to see a spike and everyone wants to get linked to and everyone wants for the conversation to be read by as many people as possible. There is this conversation that takes place mostly offline mostly among self-identified B and C list bloggers, and for years there has been this tension between them and who they see as the A list bloggers, and why can’t the traffic or notoriety be spread around a little more? A lot of people assume that between 2002 and 2004 all the shoreline had been taken up and it was virtually impossible to break through and if you weren’t one of those very early movers like Duncan Black at Eschaton or Markos or Jerome Armstrong at MyDD, then you weren’t ever going to break through. But it turns out, that even after 2004, voices were still able to break through. Jane Hamsher at FireDogLake started right after Kerry lost in 2004, Glen Greenwald at Unclaimed Territory started in 2005, and they are now seen as two of the pillars and true A list bloggers. And if you go back to the 2008 race, Nate Silver, at fivethirtyeight.com, went from being a DailyKos diarist to probably the breakout blogger last year. So if people have something insightful and succinct to say, there’s still a chance that you can break through.

That being said, it is tough. There are so many blogs out there, and there are only so many people to link to. So in terms of starting one and trying to have a voice in the conversation, be patient, and try to pick your spot. If you focus on particular issues, if you get known as someone who is very insightful on a particular issue, that can also help in terms of growing your reputation along the line.