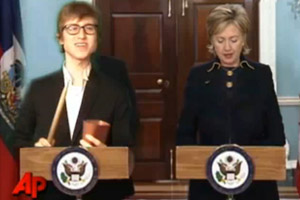 Image of Michael Gregory and Hillary Clinton from <a href="http://www.youtube.com/watch?v=tBb4cjjj1gI">Auto-Tune the News</a>

I recently caught myself singing along with Rep. Michelle Bachmann (R-Minn.) as she belted out her objections to the Waxman-Markey energy bill on the floor of the House of Representatives. Say what you will about the reality-challenged congresswoman, but she’s got pipes. Or at least she does after she’s been Auto-Tuned. Bachmann’s just one of the lucky politicians and pundits to have taken a turn in the musical spotlight via Auto-Tune the News, the online videos that take mundane clips from CSPAN and cable talk shows, run them through pitch-shift software, add some cowbell, keytars, guys in wigs and gorilla suits, and transform them into cheesy, irresistibly catchy masterpieces. Like this:

These original compositions are the brainchild of Michael Gregory, a 24-year-old Brooklyn recording engineer and musician. (He’s the guy with the cowbell in the clip above.) He may be the first person to mix politics and Auto-Tune, the music software that’s best known for creating Cher’s robotic-sounding 1998 single “Believe” and more recently, Kanye West and T-Pain’s vocal stylings. An “Auto-Tune high” inspired Gregory to start pitch-shifting historical figures such as Martin Luther King, Jr. and Winston Churchill before remixing the 2008 vice presidential debate using the software. That led to Auto-Tune the News. He’s enlisted the assistance of his older brothers, Evan and Andrew, and his sister-in-law Sarah (who’s married to Evan), who take an occasional break from their serious musical careers to sing backup for the likes of Nancy Pelosi and John Boehner and serenade Katie “Shawty” Couric, an Auto-Tune regular. I recently caught up with Michael and Evan Gregory to talk about retuning the tuneless and who might star in their seventh episode, which should be out any day now.

Mother Jones: How’d you get idea that, as the Auto-Tune the News theme song says, “everything sounds better Auto-Tuned”?

Michael Gregory: I’m a recording engineer, so I’ve Auto-Tuned a good number of singers, whether that’s cranking them up to 11 to make them sound like a robot or Kanye West, or just correctively. Everybody does that these days so they’re always in tune and sound perfect. After doing a lot of Auto-Tune at once, it has this effect on you: It’s like spinning around in a circle for a long time and then you stand still and everything’s still spinning. I would go forth into the world after being in the studio and everything I would hear would come into perfect semitones. It was kind of weird effect where everybody was like a robot. That kind of planted the seed that later I decided I could make any speaker into a singer if they were a good enough speaker.

MJ: So the better a public speaker, the better they sound in Auto-Tune?

MG: Generally. We don’t completely know who’s going to be good or bad. I’ve been surprised a few times. For example, Sean Hannity. I thought that because he was so enthusiastically angry he’d sound good, but he sounded scratchy and harsh.

MJ: Any comments on Obama’s Auto-Tunability?

MG: Obama has a great accidental singing voice if we’re selective enough with what we tune. He doesn’t, however, have the Midas touch like fellow unintentional tenors Joe Biden and Pat Buchanan.

MG: Believe it or not, Palin shares an Achilles’ heel with Obama—dropping in pitch at the end of the phrase. Sometimes, to make matters worse, she nervously rambles, which makes her nearly impervious to the powers of Auto-Tune. She has great potential, and I’m confident she’ll churn out some hits in the future.

MG: He was insanely good.

MJ: Do you end up watching a ton of CSPAN and cable news to find this stuff?

Evan Gregory: We don’t really watch a whole lot. We scour blogs; they highlight what’s ridiculous and we just rip that.

MJ: Let’s talk about Katie Couric, who’s in most of the Auto-Tune the News segments. Is she your muse?

MG: Yeah, you could call her a muse because before her, the only person I had Auto-Tuned was Martin Luther King, Jr. He’s the best of the best because he has this lyricism in his speaking. And I was like, “Unless I’m going to go round Auto-Tuning preachers, I’m never going to get this sound again.” That’s why Katie Couric being a great unintentional singer was such a pleasant surprise. It really built from there. We found other really great people like Joe Biden; other heavy hitters like Boehner and Pelosi proved the material in the future would be endless. But it was great to have that starting point of, Here’s this person who’s on the nightly news all the time and is a virtuoso.

MJ: In general, are you for or against Auto-Tune?

MG: Really neither. It’s funny how people are really anti-Auto-Tune. Some of these people don’t really know how ubiquitous it is in the industry and that every single person signed to a label is using it, at least correctively. When I listen to any record, whether it’s a single by Kenny Chesney, Adam Levine, or the Jonas brothers, I can hear the Auto-Tune on it really hard, like they’re always singing perfectly. I think it’s funny when people rant against Auto-Tune but cite T-Pain as their example, as if T-Pain is rubbish, which is totally not true. He’s far more talented than some people who are Auto-Tuned in other genres. But people attribute it to hip-hop because that is what they can recognize.

EG: Within the context of audio engineering, Auto-Tune is just one of many tools you’re using. An analogy would be Photoshop in the graphic design world. No one is ever going to go back and not use Photoshop to do editing. You can use it to do very subtle things, retouching, or you can use it to merge images that would never be together. Similarly, using pitch-detection software like Auto-Tune, you can do subtle corrections on errors and save people a lot of money by not wasting studio time. Or you can crank it up and use it as an effect like you have in the world of T-Pain.

MJ: Anyone who’s on the shortlist for being Auto-Tuned in future episodes? Sonia Sotomayor?

EG: She’s definitely at the top of our list. And you’ve got plenty of quotes from senators on both sides of the aisle that are completely ridiculous. So I’m very confident we can come up with great choruses.