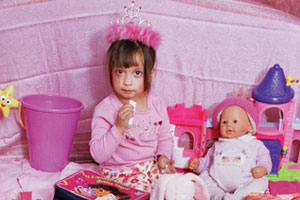 WHEN MY DAUGHTER WAS BORN about a year ago, I was suddenly buried in pink. The only gender-neutral clothing appearing on my doorstep was the brown uniform of the guy delivering piles of packages containing untold yardage of powder-pink cloth: pale-pink blankets to swaddle pale-pink diaper covers, monochromatic onesies and rompers that redundantly announced “baby girl” in contrasting embroidery. (Thank God my generous gift givers did not send any of those bow-festooned headbands designed to confirm the femininity of a bald infant.)

We’ve come a long way from my early-’70s childhood. Those were good days to be an ungirly girl: I wore work boots while sharing a sandbox with the progeny of some of the authors of Our Bodies, Ourselves. In those circles, it would have been absurd to suggest that girls’ clothing be exclusively stitched with butterflies and blossoms or that boys be clad in T-shirts emblazoned with something requiring an engineering degree to build. Such totalizing distinctions were seen as defunct at best, and at worst, harmful. Yet many of the self-described feminists who had dressed their own children in primary colors and overalls were now deluging me with enough pink to adorn a Barbie convention. What happened?

Maybe they were just buying what’s out there. Kids’ clothing stores are sharply divided into boys’ and girls’ sections, with no demilitarized zone in between. Healthtex touts its toddler boys’ line as “rich with fun, rough and tough images of cars, dinosaurs and animals in vivid bright colors”; its girls’ line is “adorable with flower art and embroidery in light and airy colors.” Restoration Hardware’s nursery designs are exclusively pink or blue, as is almost all of Pottery Barn’s kids’ line. Everywhere you look, American kids appear to be waging a national color war.

Despite the aura of old-fashioned wholesomeness that surrounds it, the pink-blue phenomenon is actually a fairly recent one. Only in the last century have American babies worn any color at all: Throughout the 19th century, children of both sexes were dressed in long white gowns. When gendered palettes came into vogue in the first two decades of the 20th century, boys were assigned pink and girls blue. This was a nod to symbolism that associated red with manliness; pink was considered its kid-friendly shade. Blue was the color of the Virgin Mary’s veil and connoted femininity. In 1918, Ladies’ Home Journal advised mothers that “pink, being a more decided and stronger colour, is more suitable for the boy, while blue, which is more delicate and dainty, is prettier for the girl.”

By the late ’30s and early ’40s, the color code flipped. It’s not entirely clear why—Shirley Temple’s light-pink dresses? Navy-blue wartime uniforms?—but by the time the baby boom kicked in, the his and hers hues we take for granted were firmly established. Pop psychology and salesmanship intertwined as trade publications urged clothing store managers to segregate boys’ clothing from girls’ after age two, since little boys “feared” being perceived as girly. In 1959, the New York Times quoted a children’s clothing buyer, “A mother will allow her girl to wear blue, but daddy will never permit his son to wear pink.” Conveniently, the fashion split also meant that families with boys and girls had to shell out for at least two separate new wardrobes—for the rest of the kids’ childhood.

Fast-forward five decades, and the marketing of color-coded gender differences has entered a new phase—one that author Peggy Orenstein has described as the “relentless resegregation of childhood.” Whether fueled by anti-feminist backlash, third-wave feminists reclaiming their girliness, or the trickling down of the Juicy Couture aesthetic, bruiser boys and dainty girls are big business. The ITP—infants, toddlers, and preschoolers—apparel market is expected to be worth $20 billion next year. Disney recently announced plans to expand its $4 billion Princess franchise, originally aimed at three- to six-year-olds, into baby products. The brand’s head told the Wall Street Journal that the move was merely a response to “highly gender aware” moms who’d tired of cute yet asexual characters like Winnie the Pooh. The Princess line even has its own dedicated shade of pink: Pantone 241. As Lise Eliot, a neuroscientist and the author of Pink Brain, Blue Brain: How Small Differences Grow Into Troublesome Gaps—and What We Can Do About It, wonders, “In today’s hypermarketed world, what niche is easier to exploit than male or female?”

Yet beyond sapping parents’ paychecks and offending feminist sensibilities, does the current wave of pinkness actually have any negative effects on kids? After all, it’s not as if gender equality defined the epoch when babes were all tangled up in the lacy hems of white gowns. Pink itself isn’t the problem; it’s the message it conveys. That troubling message, explains Eliot in her sharp, information-packed, and wonderfully readable book, is that girls and boys are deeply dissimilar creatures from day one. She argues that the pink-blue split shapes some enduring assumptions about babies’ emotional lives—at a time when girls’ and boys’ brains are almost entirely alike. Eliot notes a study in which researchers concealed infants’ sex by dressing them in gender-neutral garb or referring to them by a popular name of the opposite sex. When adults were asked to describe the babies’ behavior, the “boys” were often said to be “angry” or “distressed”; the “girls” were thought to be “joyful” or “quiet.” Throw in some pink headbands and suddenly baby girls are from Venus.

Kids quickly get wrapped up in the pink-and-blue world. In an investigation into what was termed the PFD—Pink Frilly Dress—phenomenon, a team of social psychologists from New York University found that as early as age two, children’s sense of gender is heavily based upon notions of color and dress, with little girls becoming adamantly attached to pink. One mother reported that she had to prove to her three-year-old daughter that every single pink article of clothing she owned was in the laundry—literally showing her the soiled clothes—before the little girl would agree to wear any other color. (To be fair, that’s pretty typical picky toddler behavior.) Likewise, kids latch on to gendered toys like Thomas the Tank Engine (blue) and Dora the Explorer (pink). When offered a choice of a typical “boy” or “girl” plaything, three-year-old boys are 97 percent more likely to pick a toy like a truck.

Plenty of arguments have been made for why children gravitate toward trucks or dolls—boys like motion, girls are nurturing—yet no one has reliably proved that kids are hardwired with these preferences. As Eliot points out, “neither trucks nor dolls existed a hundred thousand years ago, when the human genome stabilized into its current sequence.”

But the theory that the PFD is rooted in our evolutionary past dies hard. Two years ago, neuroscientists from Newcastle University suggested that women are drawn to pinks and reds because their prehistoric ancestors had to be attuned to ripe berries and feverish infants. Early men, on the other hand, were connoisseurs of blue—a sign of good weather for hunting. Fortunately, most academic responses to this study suggested that it was a shade of bovine-manufactured brown.

But no matter how dubious their results, the media buzz about such studies adds to the popular suspicion that we can’t defy our evolutionary urges, which feeds back into the idea that it’s harmless—and maybe even essential—to indulge our kids’ inner princesses and train engineers. “The more we parents hear about hard-wiring and biological programming, the less we bother tempering our pink or blue fantasies,” writes Eliot.

Yet is pink really the gateway color to painting your nails in science class or an appearance in Girls Gone Wild? Buried in the PFD study is the reassurance that the pink phase is just that; many elementary-school-aged girls told the researchers that they had outgrown pink and now refused to wear it. Does that mean that these girls have also shed the “math is hard” mentality that we fear lurks in the folds of crinoline? Perhaps: Notably, the pink tidal wave has crested at the very moment that girls have caught up with—and often outperform—boys in the classroom. Now pundits and parents fret that it’s boys who are getting left behind, victims of a new bias against boyishness.

Clearly, trucks and tiaras are not destiny. Despite the racing set in my childhood bedroom, I still can’t drive a car, much less fix what’s under the hood. My closet is stuffed with high heels and dresses with cinched waists. I’d like to think that I chose my girliness, not the other way around.

And I’m ultimately more freaked out about the prospect of my daughter wearing tween-size thongs than pint-size princess outfits. Besides, I’ll admit that bright pink lights up her cheeks, and I’m happy to pair it occasionally with some cargo jeans from the boys’ department or a charcoal shirt. I’ve had quite a few of those on hand ever since I dumped a mass of pink presents into a giant lobster pot on my stove top, poured in some dye, and turned them a lovely shade of gray.