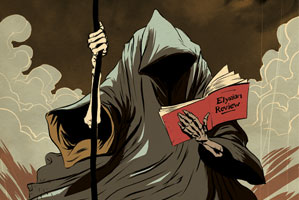 IT’S INEVITABLE. At a dinner party or on the sidelines of my son’s soccer game, someone well-meaning will ask what I do. “I edit the Virginia Quarterly Review,” I tell them. “It’s the literary magazine at the University of Virginia.” They nod politely, sometimes with the vaguest hint of recognition. Yes, they remember seeing in the local paper that we’ve won some big awards, right? It’s well respected, isn’t it? But the idea of editing a literary magazine seems, to them, only slightly more utilitarian than making buggy whips or telegraph relays. It’s the sort of arcane craft they assumed was kept alive only by a lost order of nuns in a remote mountain convent or by the Amish in some print shop in Pennsylvania Dutch Country.

And, soon enough, that may be where it winds up. After more than a century of founding and subsidizing literary magazines as a vital part of their educational missions, colleges and universities have begun off-loading their publications, citing overburdened budgets and dwindling readership. Despite the potentially disastrous consequences to the landscape of literature and ideas, it’s increasingly hard to argue against. Once strongholds of literature and learned discussion in our country, university-based quarterlies have seen steadily declining subscriber bases since their heyday a half-century ago—and an even greater dent in their cultural relevance.

Consider this: When Wilbur Cross was elected governor of Connecticut in 1930, an unlikely Democratic victor in an overwhelmingly Republican state, his principal qualification was his nearly 20 years as editor of Yale Review. Indeed, Cross essentially invented the modern quarterly when he reshaped the sleepy review to more closely mirror The Atlantic in its discussion of current events alongside literature and criticism. While preparing to take office, he was in correspondence with Aldous Huxley, Sherwood Anderson, and Maxim Gorky about their contributions to the next issue. In fact, through four successive terms, Cross never left the helm of Yale Review—publishing John Maynard Keynes on microeconomics and Thomas Mann on the threat of Nazism—at the same time he was pushing back against legislated morality (such as Prohibition) and enacting tougher child-labor restrictions. When the New York Times asked how he found time to read manuscripts and review proofs while performing his responsibilities as governor, Cross deadpanned, “By getting up early in the morning.”

Easy for him to say. Back in the 1930s, magazines like the Yale Review or VQR saw maybe 500 submissions in a year; today, we receive more like 15,000. This is due partly to a shift in our culture from a society that believed in hierarchy to one that believes in a level playing field. This is good—to a point. The reality is that not everyone can be a doctor, not everyone can be a professional athlete, and not everyone can be a writer. You may be a precious snowflake, but if you can’t express your individuality in sterling prose, I don’t want to read about it.

But in academia, supply is decoupled from demand. Beginning in Cross’ time and accelerating after World War II and the GI Bill, universities broadened their curricula to include what they called “creative writing.” Harvard, Yale, and Princeton began offering undergraduate writing courses. The University of Iowa proffered a Master of Fine Arts program, and its graduates went on to teach the next generation at Iowa or, more often, started other MFA programs—often founding a companion literary magazine at which students could work, learning the art of editing.

By the 1950s, young writers could apply to a dozen creative writing programs; the Beats could publish in Chicago Review, experimental writers in Black Mountain Review, internationalist writers in TriQuarterly, young Southern writers in Georgia Review and Shenandoah. All on the university dime. By the early ’70s—and with the development of inexpensive offset printing—every school seemed to have its own quarterly. Before long, the combined forces of identity politics and cheap desktop publishing gave rise to African American journals, Asian American journals, gay and lesbian journals. Graduates of creative writing programs were multiplying like tribbles. Last summer, Louis Menand tabulated that there were 822 creative writing programs. Consider this for a moment: If those programs admit even 5 to 10 new students per year, then they will cumulatively produce some 60,000 new writers in the coming decade. Yet the average literary magazine now prints fewer than 1,500 copies. In short, no one is reading all this newly produced literature—not even the writers themselves. And with that in mind, writers have become less and less interested in reaching out to readers—and less and less encouraged by their teachers to try.

Little wonder then that the last decade has seen ever-dwindling commercial venues for literary writers. Just 17 years ago, you could find fiction in the pages of national magazines like The Atlantic, Elle, Esquire, Glamour, Good Housekeeping, GQ, McCall’s, Mother Jones, Ms., Playboy, Redbook, and Seventeen, and in city magazines and Sunday editions like the Boston Globe Magazine, Chicago, and the Voice Literary Supplement. Not one of these venues (those that still exist) still publishes fiction on a regular basis. Oh, sure, The Atlantic still has an annual fiction issue (sold on newsstands but not sent to subscribers), and Esquire runs fiction online if it’s less than 4,000 words. But only Harper’s and The New Yorker have remained committed to the short story.

One would think that the rapid eviction of literature from the pages of commercial magazines would have come as a tremendous boon to lit mags, especially at the schools that have become safe harbors for (and de facto patrons of) writers whose works don’t sell enough to generate an income. You would expect that the loyal readers of established writers would have provided a boost in circulation to these little magazines and that universities would have seen themselves in a new light—not just promoting the enjoyment of literature but promulgating a new era of socially conscious writing in the postcommercial age. But the less commercially viable fiction became, the less it seemed to concern itself with its audience, which in turn made it less commercial, until, like a dying star, it seems on the verge of implosion. Indeed, most American writers seem to have forgotten how to write about big issues—as if giving two shits about the world has gotten crushed under the boot sole of postmodernism.

In the midst of a war on two fronts, there has been hardly a ripple in American fiction. With the exception of a few execrable screeds—like Nicholson Baker’s Checkpoint (which revealed just how completely postmodernism has painted itself into a corner)—novelists and story writers alike have largely ignored the wars. Even our poets, the supposed deliverers of “news that stays news,” have been comparatively mum; Brian Turner is the only major poet to yet emerge from Iraq. In this vacuum, nonfiction has experienced a renaissance, and the publishing industry—already geared toward marketing tell-all memoirs and sweeping histories—has seized upon the eyewitness remembrances of combatants and the epic military accounts of journalists. That, combined with the blockbuster mentality of book publishing in the age of corporate conglomeration (to the point of nearly exterminating the midlist), has conspired to squash the market for new fiction.

All of which has left too many university presidents, already in search of cuts for short-term gain, eyeing their presses and literary magazines and wondering who will miss them if they’re gone. Unfortunately, some of the journals to feel the earliest and severest impact are also some of the best. Louisiana State University cut more than 20 percent of Southern Review‘s budget. Middlebury College has given New England Review two years to break even or face elimination. Most catastrophic thus far, Northwestern University is moving TriQuarterly online and terminating the current editors—including poet Susan Hahn, who has been with the magazine for 30 of its 45 years. The TriQuarterly has consistently published seminal writers in almost every genre, yet that track record was not enough to save it from the ax.

To pull out of this tailspin, writers and their patrons both will have to make some necessary changes—and quick. With so many newspapers and magazines closing, with so many commercial publishers looking to nonprofit models, a few bold university presidents could save American literature, reshape journalism, and maybe even rescue public discourse from the cable shout shows and the blogosphere. At the same time, young writers will have to swear off navel-gazing in favor of an outward glance onto a wrecked and lovely world worthy and in need of the attention of intelligent, sensitive writers. I’m not calling for more pundits—God knows we’ve got plenty. I’m saying that writers need to venture out from under the protective wing of academia, to put themselves and their work on the line. Stop being so damned dainty and polite. Treat writing like your lifeblood instead of your livelihood. And for Christ’s sake, write something we might want to read.