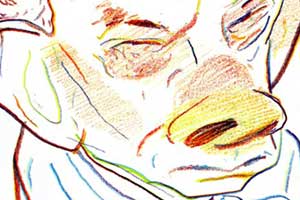 An independent scientist says the Gulf of Mexico oil spill appears to be even larger than he previously thought, based on analysis of a video released by the Senate. The video shows a dramatic gusher of oil coming from near the well’s ill-fated blowout preventer.

Steve Wereley went from being a respected but little known engineering professor at Purdue University to being the center of attention last week after he produced a startling new estimate of the size of the spill. Using a well-established scientific technique to measure flow from the biggest of three leaks near the seafloor, he determined that the flow coming out of the end of the pipe could be 10 times the size of the official figure.

Wereley has now analyzed video of a second leak. At a hearing on Capitol Hill on Wednesday, he said that leak alone appears to be bigger than the official estimate of 5,000 barrels a day.

Wereley says the oil in this part of the pipe is under tremendous pressure. Add his current figure to last week’s estimate of about 70,000 barrels a day, and his total approaches 100,000 barrels a day. And there’s another leak he has yet to analyze.

Wereley’s flow rate includes both gas and oil, so he says his figures may come down once he sees enough video to be able to quantify the amount of gas.

“But from what I see in the videos, I don’t see the numbers coming down that significantly,” he says.

Rep. Ed Markey (D-Mass.) called Wereley to talk to his House Energy subcommittee after noting the huge discrepancy between Wereley’s numbers and BP’s oft-quoted estimate, which is based on a survey of oil on the ocean surface.

When asked Wednesday what the likelihood was that BP‘s figures were accurate, Wereley said he didn’t see “any possibility, any scenario under which their number is accurate.”

Wereley told the committee he would like clean video from BP—and lots of it—in order to sort out how much of the flow is oil versus gas and to figure out if the flow has varied since it began nearly a month ago.

BP has started to provide more video to a Senate committee. But the oil company rejected a plan that would have produced an independent measure of the oil flow.

Richard Camilli of the Woods Hole Oceanographic Institution told the committee that he and a colleague had offered to put together an instrument for BP that uses sound waves to measure underwater oil flow. He said BP was interested for reasons related to broken equipment, not the environmental consequences. Camilli said he got an email from BP at 3 a.m. May 5, essentially giving the thumbs up, but at 1 p.m. the next day, BP sent a message putting the project on hold.

BP said it was turning its attention to the containment dome, which was unsuccessful.

“Our team was thanked politely by BP representatives for our efforts, and I’ve had no further communication with BP since May 6,” Camilli said.

Camilli said he hoped to use the information about oil flow to help scientists measure the magnitude of a spill that’s not only on the surface of the ocean but also spreading deep underwater. “Understanding and knowing the total amount of oil that has been released is going to be critical so that we know how much was on the surface, we know how much remains subsurface, and we can track it and attempt to mitigate it.”

BP’s position all along has been that it is making an all-out effort to contain the spill, so putting a number on the outflow isn’t a priority. Markey took issue with that.

“This faulty logic that BP is using, of course, is unfortunately raising real concerns that they are hiding the full extent of the potential damage of this leak,” he said.

Markey scored one small victory Wednesday: The Coast Guard told him he could post BP’s live video of the oil and gas spewing out of the pipe on his congressional website.