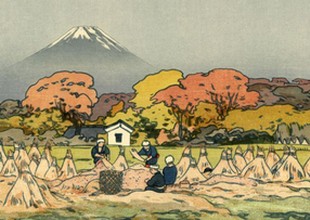 “Who was blowing on the nape of my neck?” When the opening line of David Mitchell‘s debut novel, Ghostwritten, first introduced itself to me, I disappeared into the folds of a couch for several days, reading. I would have to be pried loose again and again. While I plodded through the milestones of my twenties, through schools, jobs, and relationships, Mitchell’s other books were born, one after another. They grew into my good friends, and woe to anyone who crossed them. When a girlfriend said, “I got that Black Swan Something you recommended, but…” I nearly chalked up faint interest to irreconcilable differences. My fiancé, quite aware of my rising loyalties and/or hostilities, smartly took a stab at Cloud Atlas.

It’s hard to pin Mitchell down: His writing roves time, place, continents, and genres. He employs “tricksy” pomo devices, except when he doesn’t, as in the case of the tender bildungsroman Black Swan Green. Unlike many fiercely intellectual novelist-poets, an inviting humor inhabits his prose. His most recent novel, an East-West love story, is set in a flagging Dutch trading outpost in early 19th century Japan. He makes it work.

This summer, as the American publicity machine kicked into high gear—to introduce, it seems, all five of the English novelist’s books simultaneously to a US audience—critical acclaim tended to focus on Mitchell’s playfulness with structure. For me, it’s more a toss-up between his gift for story and the language, juiced of every last drop, that soaks the page.

I caught up with Mitchell last month over dinner at a noisy restaurant in San Francisco’s Haight-Ashbury neighborhood, near a bookstore which he would soon fill more densely than the Chinatown bus on Saturday mornings. I brought along my husband, Mother Jones reporter Josh Harkinson. The father of two young children, Mitchell spoke about his new novel, Sarah Palin, and why characters are like snowballs.

Rinku Patel: In your new historical novel, The Thousand Autumns of Jacob de Zoet, the great evil driving a Japanese character is a desire for immortality, which strikes me as a Western notion. How do you remain true to the Eastern past while resonating with a contemporary Western audience?

David Mitchell: Green tea was accidentally discovered by a Chinese emperor who was searching for an elixir of immortality. It’s a universal motif, how can we cheat death? I don’t get as far as thinking about a contemporary audience. I get as far as thinking, what can I do to make the book work?

RP: When I first cracked open this book, I was struck by a departure, for you: This book is in third-person present tense and loaded with dialogue. Why do this, and in a historical novel? To keep the momentum going? To drive the story?

DM: Yeah, the present tense does keep it to the front of the sonic boom. You’re kind of surfing as time moves on, same speed.

I saw a James Ellroy interview where he said you can write brilliant description, but the eyeball will still skip it, but even rather mediocre dialogue, the eyeball doesn’t skip. And that’s true. An early version had 100 percent dialogue. It was great for about 30 pages, but afterwards, you felt carsick.

Josh Harkinson: That’s kind of what a play is, isn’t it?

DM: Or a film script. It’s also somewhat at odds with what a historical novel is, what they usually are: It’s James Ellroyesque, in its own weird way. Many believe that people spoke better in the past, that people spoke these really long sentences, which go on and on, relative clause after relative clause. I think we get that idea from the costume dramas.

RP: You’re so good at creating voices in your stories. How do you develop a voice and maintain it?

DM: I develop it by writing a letter to myself from the character, in which the character discusses what they think about. I list about 10 things, maybe more, maybe fewer: early formative experiences, God, sex, death, money, depending on what themes are in the book, I suppose.

I relate them to language: Are they confident, verbose, fluid? Are they hesitant, sulking, do they have a big vocabulary? What do they think about society? You write this in their own language, and that often gets the plot kick started as well.

So that’s how you start, and you can’t do that on the computer screen; it must be done on paper. You maintain it, and you actually add to it. The more that happens, the more you see their responses. So they kind of snowball. Then they continue to maintain themselves by their own momentum as they roll down hill and get bigger and bigger, fatter and fatter, as snowballs. All characters are snowballs.

JH: How do you keep them from melting?

DM: Momentum and sheer climate on your side.

RP: Globalization makes communication and cross-pollination of cultures, and novels like yours, possible. Do you think there would be anything left to write if cultures stopped being exotic to one another? Would there be still be miscommunication?

DM: There’s a brilliant novel in the interpersonal dynamics of the waitress who’s looking after us now, and the other waitresses, and the chef in the kitchen. There’s wonderful, rich, dripping stuff within 15 feet of where we’re sitting. Look at Emily Dickinson: She didn’t leave her house, but she found art, strangeness, mysticism…

RP: Emily Dickinson was an outsider within her community…

DM: Being an outsider is just a matter of perception.

RP: I’ve always taken great pleasure in reading your books line by line. I love the sentences, the flow, the momentum. But this book…

DM: Made me throw up!

RP: With this book, I wanted to jump forward to the end. I was emotionally invested in the fates of the characters, and not just in the sensory pleasure of the language. Was that a goal?

Perhaps this is more a character-driven novel than I’ve done before, because they’re not free. Maybe that’s why you felt the way you did, or maybe I’m just getting better at depicting characters.

I try to imagine every book as my first novel, and it would have to swim out of the slush pile on its own merits. It’s a conscious aspiration that I never become an “of course they’ll like it, it’s my latest” kind of a novelist, because that’s the beginning of the end.

RP: It was my favorite.

RP: So we’re in the Bay Area, the land of Google and software programmers. One local author, whom Michiko Kakutani glowingly reviewed in the New York Times, has said that poetry can be arrived at like code, because the heart is knowable, and the mind is essentially a computer. Thoughts?

DM: He must be a much cleverer man than I am, because I’ve never met a heart that I’ve found knowable. The mind, analogous to a computer: Watch out for analogies, they can lure you into a false sense of security. An analogy can convince you that you understand what is being analogized. The mind a computer…really? Really, really?

DM: It’s a mind. It’s un-analogizable. In the early 20th century, the analogies to the mind were mechanical things, in the mid-20th century the language of electrical circuitry was provided. Of capacitors and resistors—whatever the leading technology of the day is, that’s how people think of the mind.

I feel that there’s a mind inside the mind, I guess the old fashioned word would be subconscious or unconscious. There are scientific theories about what they are and where they are but they’re never terribly convincing: I’m interested in them, and neurology’s fascinating but it hasn’t yet had an Einstein or a Newton that really delivers answers. We’re still in the rather coggy realm of likelihoods and probabilities, of all things–ish.

The answer is the mind is the mind, and that’s why artists are still in business. Kokoro is the Japanese word for the heart and the mind. It’s a bit of the same word, and I think they’re on to something there.

RP: You’ve written in lots of different genres; what are your thoughts about writing horror?

DM: Is creating what is essentially a baby farm, in the wombs of women who are bought to be there, babies given up to be sacrificed/murdered so that some arcane wacko ritual will create something called the oil of souls and allow the imbiber to cheat death, is that not horror?

RP: That’s horror. That’s the fundamental evil behind the character Abbot Enomoto in your new novel. But would you enlarge a story like that, would you make the horror element even bigger in a book?

DM: The book I’m actually working on now may actually have a larger Frankenstein’s monster of horror in it, maybe.

RP: Mother Jones being a political magazine, we have one question from a great political leader: Sarah Palin.

DM: Now we’re in the horror story. Where’s the door?

RP: She knows you have a big vocabulary. Palin,who’s beefing up her vocabulary in preparation for her new talk show, asks: “Hit me up real good with a word of your choice, like you do at interviewings all around our great land, here.”

DM: It’s quite hard to pluck great words out of nowhere. Okay, how about this: pavonine. Kind of appropriate for Sarah Palin. You get five points if you get that one.

DM: It’s the zoological adjective that pertains to peacocks, in the feline, canine, bovine, pavonine model.

RP: Final question. How do you manage to bring together diverse plotpoints and viewpoints into one story?

DM: “Pack as much as you can, in as small suitcases as you can,” is a stylistic unifying theory that I try to apply. I think good writing does that.