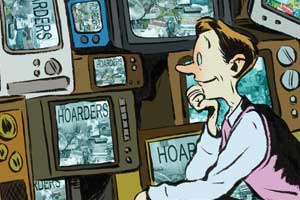 THE PROTAGONISTS on Hoarders, the engrossing pack rat-makeover show that’s now in its second season on A&E, mortify their offspring. Upper-middle-aged, often lumpy and garrulous, these men and women embody the dark side of “home”—the bog, the smother, the inescapable repetitions and compulsions of family life. The cornerstones of their hideous stashes of rotting rubbish are often baby clothes and infant baubles. Acquisition No. 1 may have been the children themselves.

No wonder the grown children, often neatly dressed scolds in their 20s and 30s who are nominally worried for their parents’ health, seethe. (On ChildrenOfHoarders.com, they commiserate over esoteric afflictions like “doorbell dread”—fear of answering the front door.) Parents who hoard also hold on too tight. They’re disgraceful. They befoul the family home—a child’s birthright!—and disgust guests, suitors, social workers.

Hoarders, then, differ from drug addicts and alcoholics—the other darlings of televised spectacles of reformation. Addicts are hyperconsumers who’ll hock anything for drug money; hoarders won’t part with so much as a Reese’s wrapper. On television, addicts are intervened upon by wits’-end family members who recount with sorrow the fall of gentle Jason or Amy into meth or inhalants. He or she “threw it all away”—all that promise, beauty, talent, money.

But in hoarders, we have cultural protagonists who won’t throw away jack. According to Randy O. Frost and Gail Steketee, the authors of Stuff: Compulsive Hoarding and the Meaning of Things, these people have a range of reasons for hanging on. Above all, they can’t process information well, which confounds what should be routine decisions about discarding or organizing. They also harbor false beliefs about the value of their possessions, and how integral their things are to their identity.

Celebrity surgeon Mehmet Oz devoted a shocked TV show to the “disorder” of hoarding, noting that nearly 1 in 20 people hangs on to items that other people consider trash. A massive understatement, no doubt: Does anyone hang on only to stuff of demonstrable value? Oz cited studies saying hoarders have hyperactivity in the orbital-frontal cortex; they are likely men who have experienced poverty. Perhaps they express a squirrel instinct gone mad. More than 3 million Americans are compulsive hoarders, according to A&E—which bases that figure on admittedly mushy estimates provided by a consulting psychologist.

Who’s to say, really, where eccentricity turns into pathology? A 2008 survey found that 1 in 10 American households rented a storage unit—a purgatory for belongings that’s less visible, but often no more valuable, than a home hoard. “The show has kind of opened the closet doors,” Andy Berg, an executive producer at A&E, told me. “People say, ‘My neighbor was a hoarder. My dad is a hoarder. You should come to my sister’s house!’ I’m shocked by how many people know a hoarder.”

And we find them endlessly fascinating. E.L. Doctorow’s latest historical novel, Homer and Langley, makes counterculture heroes of the Collyer brothers, those Manhattan hoarders nonpareil who died of starvation and suffocation by trash in 1947. Grey Gardens—the HBO movie that followed the 2006 Broadway musical based on the 1975 documentary of the real lives of elite hoarders Little and Big Edie Beale—cleaned up at the Emmys.

But why would we dwell on hoarders now? Maybe it’s self-loathing. By sitting on stuff, by letting it rot, hoarders flaunt their “bad” old stuff—which makes a mockery of our “good” new stuff and our irrepressible impulse to scrap what’s obsolete and upgrade at Amazon and Overstock and the Apple Store. They violate the American way of consumption. Far more than wastrels, hoarders infuriate us. As a nauseating television image, the jam-packed bedroom may now trump even a needle in the arm.

Who’s to say, really, where eccentricity turns into pathology?

Or maybe we secretly admire the hoarder’s tenacity and thrift. If the aughts were all about flipping, perhaps this decade we’ll turn to hoarding as we all freak out about losing everything. Stubbornly guarding their estates, hoarders have an old-world quality—barons sitting atop family piles. All that stasis and entrenchment, along with their years, gives them a measure of gravitas, even charisma.

The great pathology of a century-plus ago—hoarding was much discussed in the 1890s—exerts new fascination in an age of similar anxiety about property and currency devaluation. In those days, grown scions may have hated hoarders because they were waiting on an inheritance. “The avarice of old age,” Georg Simmel wrote in The Philosophy of Money, in 1900, would seem to be “expedient as provision for the next generation.” But the hoarder passes nothing along: “The older he gets,” Simmel wrote of miserly types, “the less he is willing to part with his treasures.”

As hoarders shore up the fragments of their existence, they also bankrupt themselves to maintain and nourish their heaps with shopping sprees, fines, foreclosures. Walter Benn Michaels, in his mind-bending 1987 book The Gold Standard and the Logic of Naturalism, argues that hoarders and misers are, paradoxically, spendthrifts: They pay to save. They don’t sell or chuck their stuff because they are, in essence, investing it—along with their life force and their children’s—in their hoards.

After the last decade’s house-buying-and-beautification bender, and the concomitant mania for decluttering manuals—books that preached what John Updike once called “the sweetness of riddance”—there’s something intriguing about these characters whose design scheme is defined by negligence and mess. It’s creepily exciting to behold these houses; the opposite of chic, they exhibit a maximalist aesthetic.

The hoarders’ horror at tidiness is also bracing. “I felt a lot like I was on my way to the executioner,” Kerrylea, a Seattle hoarder who was evidently underwater on two crammed houses, confided to the camera about the day she faced a Hoarders cleanup crew: “Just waiting for them to blindfold me and tie my hands behind my back.” The thought of some of her most-loved things—a kid’s tutu, a piece of broken tile—being treated as garbage, was “like somebody punched me in the stomach.”

Hoarding and narrative seem to go hand in hand: “They have a story about every single thing they touch,” sighs one therapist.

No wonder novelists, playwrights, and filmmakers are drawn to these morbid stories. Hoarding and narrative seem to go hand in hand: “They have a story about every single thing they touch,” sighs one therapist featured on the show. Russ, a hoarder who appeared on A&E’s companion show Obsessed, considers any secondhand items “keepsakes” or “antique.” To shed them would dishonor—even injure—the family and friends he associates with the stuff.

One of the saddest Hoarders scenes to date replays the tragedy of turn-of-the-century goldbugs, who would put their fortunes in metal only to find it cheapened by inflation and paper money. Paul, an Alabama hoarder, is offered a half-penny per pound for his life’s collection of scrap metal. (On two acres, he keeps 100 lawnmowers, 40 to 50 refrigerators, some 70 cars, and a school bus.) He’s been hoping to make 40 grand. This rate will net him three. He sobs.

In her viral video The Story of Stuff, Annie Leonard grappled with planned obsolescence and enforced consumption. The popularity of her work suggests that consumers are in a reflective mood and are beginning to doubt the American imperative to spend, acquire, and discard in rapid cycles. Maybe it’s the declutterers, hawking their pricey services and custom closets, who are really the shady characters. Writers increasingly tend to represent hoarders like the Collyers and the Beales as resistance fighters—resourceful stewards protesting with the bulk of their hoards a cruel system of wastefulness and disposability.

And unlike other new shows on beleaguered broadcast television, it appears to have no trouble attracting ads. On a recent rerun of the original pilot, “Linda & Steven,” a Big Lots spot shows a young couple standing curbside and comparing their new home to the decked-out houses around it. “I think we need some stuff?” the husband prompts. She can hardly contain her reply: “I think we need a lot of stuff!”