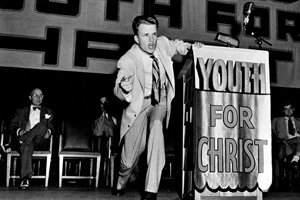 Just before Christmas, George W. Bush traveled to North Carolina to pay a visit to the one man who, perhaps more than any other, made his political ascent possible: Billy Graham. But the aging evangelist’s contributions go far beyond simply helping 43 sober up and find Christ on a beach in Kennebunkport. As a charismatic young preacher in the post-war era, Graham galvanized southern evangelicals who had migrated to the Golden State. Socially conservative, business-friendly, a new political brew fermented in the cul-de-sacs of Southern California. The results: Yesterday’s religious right, today’s tea party, and the Reagan and Bush presidencies.

Historian Darren Dochuk explains the 50-year process in his new book, From Bible Belt to Sun Belt. Mother Jones spoke with Dochuk recently about Sarah Palin, the tea party, and the next Billy Graham.

Mother Jones: If you mention the Okies’ migration to California, people think of Tom Joad in The Grapes of Wrath. And maybe Casy, the wayward preacher, if you mention religion. But Tom and Casy were commies, not conservatives! Does this mean John Steinbeck was full of it?

Darren Dochuk: [The Okies] who came with clear religious allegiances to their Baptist and Pentecostal churches certainly shared some of the Joads’ ideas about social justice and the economy. But once they reached Southern California, in some ways they had to make a choice between their liberal, even left-leaning, economic views, and their right-wing conservative values.

MJ: California’s a weird place—people tend to use the word “dysfunctional” to describe it. There’s the referendum system. And it’s just generally way too big. How did that affect the rise of Christian conservatism here?

DD: The kind of popular, democratic sentiment behind the ballot initiative is a creation of the western frontier, and it’s something the evangelicals were familiar with back in Oklahoma. It really does work to their advantage: Every two years you have to mobilize your ground troops, and Evangelicals have always been highly effective at mobilizing behind a fierce and exaggerated rhetoric.

MJ: You also have to contend with people like Harvey Milk, who might not have generated much liberal momentum in, say, Mississippi. Would evangelical conservatism have been the same if it’d been cultivated somewhere else?

DD: [Caifornia] did really have a sense of being up for grabs in the ’50s and ’60s. It was torn ideologically, and it was torn regionally between the South and the North. Evangelicalism thrives in an all-or-nothing proposition, and that’s what California politics seemed to be in the early post-war period.

MJ: How was Billy Graham able to thrive in Southern California the way he did?

DD: Well, he was a young, good-looking, charismatic preacher who came to California at the perfect time. He arrived in the wake of an incredibly volatile period of labor politics and clashes between right-wing and left-wing Democrats. Then there was the fear of communism locally and on a global scale, which was reaching its height at that very moment. And so he was able to not only tap into those anxieties and fears, but to kind of steer away from some of the anger, some of the harshest elements of that political class, and provide a sense of reassurance for not only evangelicals but many Americans at this time.

MJ: One of Graham’s ideas from the late 60s, which you occasionally hear today, is the idea of socially conservative blacks and conservative whites voting as a bloc. But instead you get the Southern Strategy. Were people like Graham serious?

DD: In the 60s, in response to Watts, I do think Billy Graham and other evangelicals were sensitive to racial issues. And I think they were naive. And ultimately they were incapable of offering any structural critique of racism. But at the same time they demonstrated some flexibility and an ability to cross racial barriers and create a colorblind coalition.

Evangelicalism continues to wrestle with its white, suburban, middle-class identity. And it allows, to this day, a racist element and a racist rhetoric. At the same time, Evangelicalism is malleable, in terms of race, and in the 70s, did a pretty good job of at least kind of distancing itself from the harshest elements of the Jim Crow era. And that’s exactly why it succeeds.

MJ: The idea in your book is that, as California goes, so goes the nation. Is that still true?

DD: I see elements of that. From the conservative side at least, and from evangelicals’ perspective, I don’t think California holds nearly as much influence politically as it once did. But culturally I think it still remains cutting-edge. It still is able to sell and teach other evangelicals a more creative, colorblind, multicultural conservatism that’s quite appealing. Applying new techniques of marketing and collective witness, for instance. And always testing new forms of church organization and church ministry. Saddleback Church, of course, is a prime example of that.

MJ: Do we fixate too much on guys like Jerry Falwell and Pat Robertson?

DD: I think we do, and you can understand why; they make good soundbites and certainly they’re the most vocal and outspoken. And you do need to take them seriously, and certainly the press does and historians do. But what you’re missing is really the foundation of evangelicalism and evangelical conservatism, and that’s the people in the pews. And the businessmen, and boardroom politics. That’s really the power base of evangelical conservatism.

MJ: The guy who’s making tons of money at his business in Oklahoma and using it to finance a new college.

DD: Once you get into that, it’s really amazing the networks that exist and are created to support this entire system. And that’s the brilliance of conservative activism.

MJ: People are always asking, “Who’s the next Billy Graham?” Is that even a relevant question these days?

DD: I think it is. I don’t really see a Billy Graham on the horizon. Certainly there are names floated, and I think there are some very powerful leaders within the evangelical community, both white and black, who have some real potential. But still I don’t see anyone of Graham’s stature—and perhaps that will never be replicated, considering how diverse now the religious and evangelical environment is.

It’s like asking, “is there another Reagan?” That’s partly the question evangelical conservatives are facing: Who are these religious and political leaders that can provide them with a creative vision? Not one that’s built on a backlash, like Sarah Palin, but someone like a Graham, or a Reagan, who are also forward-looking.

MJ: Your research coincided with the rise of the tea party movement. Do you see a connection between that and what you write about?

DD: I see a lot of similarity, and perhaps that’s sort of a fallback for historians. But I think back to 1978 and how it wasn’t necessarily abortion or social issues that galvanized evangelical conservatives; it was tax issues. They’re every bit as concerned about taxation as they are with politics of the body. Today we look at the tea party and many pundits tend to accentuate the divide within the tea party between fiscal and social conservatives, but in reality I think there’s more continuity there than anything, and evangelical conservatives are the bridge between those two.

MJ: People react with shock when Ralph Reed announces that tax cuts are a values issue.

Taxation is a values issue for them. Family values are based on a certain economic model that finds a home in suburban Orange County.

DD: Taxation is a values issue for them. Family values are based on a certain economic model that finds a home in suburban Orange County, so it’s no wonder you’re going to be fighting financial issues, tax issues, as feverishly and as vigorously as you’re going to fight other more explicitly social issues.

MJ: So what can the tea party learn from Southern California conservatives, circa 1964?

DD: What is key now for the tea party and the Republican party is that they’ve got to temper that [radicalism] and find a leader who can bring the Right back to the center. And find a way to quiet or at least tame some of the more radical edges.

DD: Right, what’s impressive there is the way they went from the tea party politics of ’78, to the centrist conservatism of 1980. That was the genius of Reagan, and that’s what the Republican party and the tea partiers are going to have to do for the next 24 months.