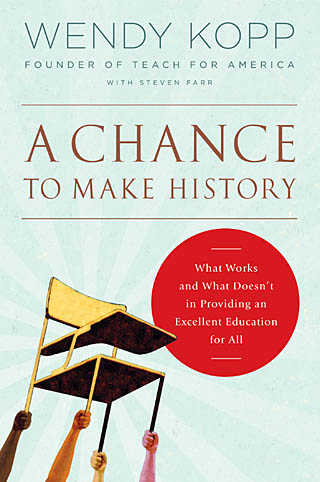 When I started reporting on education for Mother Jones, I began to dread weekends. Weekends, see, are when I plow through a teetering stack of education reform books—often dry, jargon-filled, and stripped of human voices. Even education reformers struggle with these tomes; Rachel Norton, a San Francisco School Board member, wishes education reform writing in general was more accessible to parents and students. How else can we expect them to be a part of the debate? she wondered.

In that sense, Teach for America founder Wendy Kopp‘s latest education book is a refreshing change. High school freshmen and veteran policy wonks alike will find A Chance to Make History: What Works and What Doesn’t in Providing an Excellent Education for All to be accessible and engaging.

Kopp’s lessons are drawn from Teach for America, which this year sent 8,200 new college graduates to teach in high-need schools across the US. Those 8,200 teachers may be a drop in the national teachers’ bucket of 3.7 million, but they’re still part of a bigger TFA corps than ever before, especially in Arkansas and Mississippi. And many TFA alums will continue to teach after their two-year paid fellowship ends. Some may even become power players in education reform, following in the footsteps of DC’s Michelle Rhee and the founders of the successful charter school networks KIPP and Uncommon Schools.

Has TFA’s Peace Corps-like strategy worked? Kopp argues that for hundreds of individual classrooms and schools, the answer is yes. The next step, she says, is to figure out how to scale up these local successes—starting with shedding America’s national obsession with “silver-bullet solutions” (like charter schools) and “silver scapegoats” (like teacher unions).

Mother Jones: What did the education debate look like 20 years ago when you founded Teach For America?

Wendy Kopp: I started Teach for America because I was one of thousands of graduating college seniors searching for a way to make a real difference in the world, and I thought that we should be just as aggressively recruited to teach in urban and rural schools as we were being recruited to work on Wall Street. That was the beginning of a much bigger effort than I ever envisioned.

Back then the prevailing notion—backed up by all of the research at the time—was that students’ socioeconomic backgrounds determined their educational outcomes. We had a few charismatic teachers and principals here and there who were providing students in low-income communities with what I would call a transformational education, but we viewed those as outliers and not as successes that could be replicated. Today we are surrounded by hundreds of examples of not only teachers but whole schools that are putting kids in low-income communities on a trajectory to graduate from college, at much the same pace as kids in other communities.

MJ: You’ve been following education reform for the past two decades. How has it changed? What do you think of its tone now?

WK: The biggest positive change in the conversation is that we’ve moved away from the assumption that in order to fix education in low-income communities, we have to first fix poverty. Today, we know that we don’t have to wait for that. We know that we can provide kids with an education that sets them up to succeed. That’s a huge change.

In terms of tone, we’ve spent much of the last 20 years blaming one group or another. We spent a great deal of time blaming kids and their families. Some of our public discussion sounds like we are blaming teachers. And really, this is a very complicated and systemic problem, and at some level, all of these groups are caught up in a vicious cycle. Kids in urban and rural areas face so many challenges, and they show up at schools that don’t have the extra capacity or extra resources to meet their needs. It looks like we could blame everyone in the picture, and yet, at some level, we almost need to establish the blamelessness of all of these groups. We all need to change to get where we need to go. My hope is that, given the stakes, we will do that. This is a life-threatening issue in our country. 15 million kids are growing up below the poverty line (PDF) in our country, and half of them don’t graduate from high school. And the consequences of that for our society are extreme. Now that we know what’s possible, we have a moral imperative to act on that and scale the success.

MJ: Do you see any places where that’s happening?

WK: I really do. In A Chance to Make History I share an example in Colorado, where civil rights groups, educators, elected officials from both sides of the aisle, and a teachers’ union came together to affect legislative changes at the state level that make it much easier for committed educators to meet the needs of kids. And I heard another example yesterday in the Seattle School District, where community leaders working together with the union and the district led to important changes in the teachers’ union contracts.

MJ: In your book, you talk about the need to improve teacher evaluations. What do the best models look like?

WK: There are school systems that are pioneering new, sophisticated approaches when it comes to teacher development and evaluations. One of the school systems is in DC. There is a group of people there who developed a teacher evaluation system and many people across the country are holding it up as a real example. It has revolutionary possibilities.

MJ: Are they still falling short in any major areas, in your mind?

When you think about what most successful organizations put into attracting and developing tremendous talent, schools are far from where they need to be. Teachers need strong management, just like anyone in any profession.

WK: This is their first year of implementation. It just shows where we are in the effort. When you think about what the most successful organizations put into attracting and developing tremendous talent, we are so far from where we need to be. Even the folks in public schools in DC, who I think have the best model, will say that much more needs to be done.

WK: Effective teacher support in my mind is the same thing as effective management. Our teachers need strong management, just like anyone in any profession. That means that they have clear goals, someone more experienced who can observe their work, give them feedback and reflect with them, and help identify areas for development and resources that could help teachers. That’s the foundation.

When you spend time in these very successful schools, what you always see is a school leader who is deeply committed to attracting and developing teachers. They then develop a very strong team among teachers, so they can learn from each other and challenge each other. They develop a strong culture of collaboration. And they also build strong one-on-one relationships.

MJ: You spend a great deal of time in your book calling for an end to “silver-bullet” solutions and “silver scapegoats.” You’re also very realistic about charter schools’ ability to “fix” education. But it does seem that the most successful TFA alums you profile opened charters, rather then working for reform within public school districts. Why is that?

MJ: Why do you think there are so many bad charters?

WK: I think many embraced the notion that charter laws themselves would be the answer. They can be an important part of the answer, but at the same time we need to go about the very hard work of building the leadership necessary to take advantage of those laws. We all feel that the education problem is urgent, and we wish it was easier to fix it than it is—as easy as implementing governance changes, or throwing more money or technology at the problem. But sometimes those solutions can distract our focus from the core of the solution, which is ultimately about a sustained effort to build the capacity of our education system to accomplish something incredibly ambitious.

MJ: Was Waiting for Superman good or bad for education reform?

WK: Most importantly, Waiting for Superman showed that kids and parents in low-income communities desperately want a quality education. It’s stunning to think that two or three years ago, people just assumed that kids in low-income communities don’t succeed because their parents don’t care. We at TFA know through our firsthand experience that nothing can be further from the truth. When kids are met with the highest expectations and given the extra supports they need, they can be as motivated as kids anywhere.