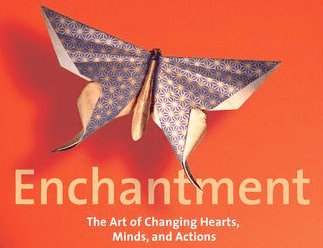 Step one to world domination: Smile. No, really smile. Think George Clooney, not grumpy flight attendant. Step two: Ask yourself, What Would Guy Kawasaki Do?

Kawasaki, Apple’s former chief evangelist, would probably convince people that resistance is futile. After all, Kawasaki spent Apple’s formative years wooing software developers into creating Macintosh-compatible products—and you know how that turned out. Nearly two decades later, Kawasaki’s 10th book, “Enchantment: The Art of Changing Hearts, Minds, and Actions,” explains in detail how you can similarly delight friends and influence people regarding your own cause, whatever it might be. Want to make your spouse happy? Or figure out how long you’ll really have to wait in line for that Disneyland ride? Enchantment has you covered. Wide-ranging and fun to read, the book offers useful advice and interesting trivia on everything from Grateful Dead concerts to the perfect YouTube video length to how often to swear in a business setting.

Kawasaki corresponded with Mother Jones via email about Apple, Africa, and the dark arts of enchantment after meeting in person at this year’s South by Southwest Interactive conference in Austin, Texas.

Mother Jones: Is there an area in American public discourse where people who should be enchanting others currently aren’t?

Guy Kawasaki: There are many American public discourses where people should be enchanting each other but aren’t. One need look no further than Congress, where much of the rhetoric is about partisan politics and the accumulation of power—not the welfare of the people. However, there is an even bigger issue. America as a country isn’t enchanting—although many Americans as individuals are. Is the US’s role in the world likable? Are we trustworthy? If other countries tried to run the US the way we try to run them, we would go ballistic—no pun intended. The world could use more books and less bombs. Or, maybe I’m just naive and ignorant about world politics.

GK: My advice for the way to bring home the message about conditions in Africa is to not focus on the vastness of the problem and the millions of people who are dying or suffering. The numbers are too big—so big that they are incomprehensible or too painful for many people to want to comprehend. Perhaps a better way is to tell the stories of individuals as opposed to the mind-numbing large numbers. The goal is to personalize the suffering—to give it a face and a name. Think of the power of the stories of Anne Frank or Elie Wiesel.

MJ: An intriguing parallel has arisen between Apple’s early, anti-establishment marketing style and Apple competitors’ recent ads (e.g., Motorola’s Super Bowl commercial). How much credence do you give claims that Apple is now the establishment, and that other companies occupy the outsider position Apple once did?

GK: The Motorola commercial was silly. You’d have to be at least 40 to even get the dig at Apple’s 1984 commercial. The irony is that the people most likely to understand what Motorola was trying to do are the least likely to be moved by it: Apple fanboys and fangirls. At least the good news was that Motorola’s ad was only silly compared to Groupon’s ads, which were stupid and tasteless.

Apple doesn’t suck in most people’s eyes, and it makes good stuff, so this marketing approach won’t work. I wouldn’t run an anti-establishment ad to compete with Amazon, Zappos (I know it’s part of Amazon), or Virgin America either. For a company to occupy the outsider position that Apple once did, it has to be outside and have a better product, not just be outside.

MJ: Today’s new tech companies seem better organized and less prone to excess than the dotcoms of the late ’90s, which is probably great for investors but boring from a party standpoint. Am I right in thinking that start-up culture has calmed down and grown up?

GK: The root cause of excess wasn’t dotcom entrepreneurs. It’s much deeper: a primal lust for money and power, and this corrupts people in any industry. The dotcoms went through this stage, but so did the banks and financial institutions. And this will happen again when other industries generate large sums of money. You might see it happen with social media soon.

I’d go with the simplest explanation of less excess in startups: there aren’t the funds to do excessive things. Once the recession ends, we’ll know if it was a change in character or simply lack of opportunity. When you hear this line of thinking, you’ll know excess is back: “We’ve been working so hard and things have been so tough that we deserve to live a little now that the economy is back. It’s good for morale, and our investors and shareholders want us to have a highly motivated workforce, so let’s charter a jet and take everyone to Kona and bring in Usher for a concert.”

MJ: How has Silicon Valley changed most dramatically in your view in the past two decades?

GK: The biggest change is that it’s much cheaper to start a company. Think about what you need: people, marketing, infrastructure, tools, and office space. People are much cheaper because of the recession. Marketing is free if you use Twitter, Facebook, and blogs. Infrastructure is cheap because all you have to do is call up RackSpace or Amazon for servers in the sky. Many tools are Open Source, so their costs are zero or at least very low. Office space is also cheap—if you need office space at all with virtual teams.

It used to be that you tried to raise $1-2 million to build a prototype. Now you should be able to create a prototype with $25,000-$50,000. Venture capitalists expect you to show up with something that’s shipping, not just a PowerPoint presentation. In fact, you may not need venture capital at all—at the very least, entrepreneurs are negotiating from positions of much greater strength.

MJ: Given how ubiquitous the glowing Apple logo was at this year’s SXSWi, do you ever think, ‘hey, maybe that evangelism thing worked a little too well?

GK: You’re giving me too much credit. My evangelism focused on getting developers to create Macintosh products in the mid-1980s. I also did some work with the Macintosh cult. The success of today’s Apple is hardly because of my work—in fact, one could make the case that Apple really turned the corner when I left in 1997. Correlation or causation? We’ll never know unless I return to Apple, and it tanks.

MJ: Do you see any downside to the ubiquity of Apple products in geek circles?

GK: When you buy Apple products, you get both a status-symbol and a great gadget. If the status-symbol factor goes away because the product becomes commonplace, people will still buy them because they are great products. The bottom line is if you want to enchant people with products, make great stuff. Ubiquity is a high-quality problem—worry about it when you come to it.

MJ: What one piece of advice would you give to a non-profit or individual trying to change the world for the better?

GK: My one piece of advice is that non-profits should think of themselves as for-profit startups. They need to find customers, deliver a “product” that customers want, figure out a business model, raise money, hire good employees, and establish a brand. For-profit companies and non-profits are more similar than they are different. This model is a good mental framework for non-profits.