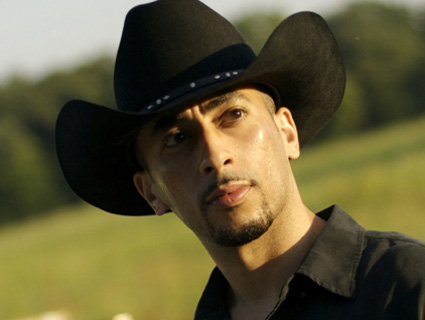 When Andrew Mitchell, the cultural affairs officer at the US Embassy in Egypt, heard that a Muslim dude was making a go of it as a country star, he thought it was “the funniest thing I’d ever heard.”

So Mitchell began checking out Kareem Salama’s stuff—his two self-released albums, Generous Peace and This Life of Mine, and his 2007 hit song “Generous Peace,” whose video is as wholesome as an ABC After-School Special. “Gentlemen, I’m like incense; the more you burn me, the more I’m fragrant,” Salama sings, echoing the writings of the eight century Islamic scholar Muhammed Al-Shafi’ee.

“That is a concept,” Mitchell recalls thinking, “that if I could broadcast anything to this part of the world, that’s what I would say.”

Salama is an American, born of Egyptian parents—engineers both—who came to the US for college and ultimately settled down here. They raised Kareem and his three siblings in the rural town of Ponca City, Oklahoma. The town had no mosque, and only one other Muslim family lived there, but the children learned Islamic traditions at home. Salama, now 33, considers himself devout; he prays regularly, and doesn’t drink.

Culturally, though, he identifies as a rodeo-going, country music-loving southerner. “I grew up in a place where country music is kinda like crickets,” Salama explains in his heavy drawl. “You just hear it everywhere you go.”

The more Mitchell learned about Salama, the more excited he became about the stereotype-busting potential of his story. Egyptians (and Americans) tend to associate country music—and the American South—with conservatism. And they tend to associate conservatives with Islamophobia. Egyptians will say, “‘Oh, he’s a cowboy. He’s a conservative. He hates all Muslims,'” Mitchell says. “We can show them: Here’s an Oklahoma cowboy who not only doesn’t hate Muslims, he is a Muslim!”

Salama is a rodeo-loving, Muslim country boy. “I grew up in a place where country music is kinda like crickets,” he explains. “You just hear it everywhere you go.”

In US diplomacy terms, Salama was a “total winner all around,” Mitchell says. So he pulled some strings. Last summer, Salama was invited to participate in a six-week, US government-sponsored tour of the Middle East. The program included both concerts and group discussions at schools and community centers. Salama jumped at the opportunity. “I like to focus on a message of reconciliation and bringing people together,” he says.

Everywhere he went—Egypt, Bahrain, Jordan, Israel, the Palestinian territories, Morocco, Kuwait, and Syria—there were droves of people at his appearances, especially children. “A lot of times when we talked about things like respecting people who are different than you and being tolerant, it was clear that they had already discussed those things in school,” Salama recalls. (He included some tour footage in the video for his pop song, “Makes Me Crazy.”)

But Salama refused to engage Middle Easterners on controversial topics. If, for example, an audience member asked why the US government was sponsoring his tour while simultaneously providing billions of dollars in military aid to repressive Arab regimes, Salama dodged the question. “I’m not a politician and I don’t like to talk about politics,” he explains. “I told them that I don’t answer political questions. And the press corps was like: Why? And I said because, at the end of the day, I think it’s a waste of your time. Most of you have never voted in your lives or effected any change in the government whatsoever. And the intelligent person always focuses in their lives on the things that they can actually do something about.”

Sometimes, Salama would simply redirect the conversation. “There was a moment when we were in Jordan when a kid who was of Palestinian descent asked me something about America’s foreign policy. I looked at JJ [an American friend], and I put my hand on his shoulder, and I said, ‘Did JJ ever do anything to you?’ And his face completely changed. He softened in that moment and just goes, ‘No he hasn’t.’ And that was it.”

Salama’s songs can be spiritual, but they’re not overtly Islamic. Nor do his lyrics criticize American foreign policy. One song, “Baby I’m a Soldier,” tells the fictional story of two dying soldiers from opposing sides, emphasizing their common humanity—but it takes no jabs at US military actions.

In Bahrain, Salama performed at schools that primarily served the country’s more-affluent Sunni community. At the time, he was unaware of religious tensions in Bahrain, or that the Western-backed government, which has close ties with Saudi Arabia, systematically represses and discriminates against the country’s Shiite majority. “I’m pretty woefully ignorant of Bahrain in general,” Salama acknowledges.

But he did tell audiences in Bahrain and elsewhere about his idyllic childhood in Oklahoma. “I didn’t experience much” discrimination, he told me, adding that he even played the lead in his sixth-grade Christmas play. “There’s an old Arabic poem that says, ‘It’s sad to see a man who has 100 good days, and he always complains about the one bad day.’ Even if there was something bad that happened, I’ve had such a beautiful life and a beautiful experience growing up where I did.”

Salama is pretty patriotic. Even so, he sometimes encounters bigotry online. In 2007, after he appeared on Fox News to talk about racial profiling, some anonymous Fox commenters claimed he was a “terrorist hiding in the open,” and not a “real” American.

The 2010 tour was part of a larger “public diplomacy” program that costs US taxpayers more than $100 million each year in the Middle East alone, according to a State Department official. Every embassy in the world has a public diplomacy division that engages in various outreach activities, hoping to nurture person-to-person relationships between Americans and foreigners. That’s in addition to the Peace Corps, a federal program whose budget was $400 million last year. Another $1.3 billion has been allocated to the Muslim World Outreach Program—this multi-year federal initiative, launched in 2003 by the National Security Council, aims to “transform Islam from within” by supporting secular, liberal Arab organizations as well as the work of secular, liberal Muslim scholars.

Mitchell believes cultural-exchange programs help combat extremism, and implies that many Arab civilians are simply unaware that most Americans are decent human beings. He offers a hypothetical scenario where a kid meets Salama and is later approached by a jihadist who insists that America is “the Great Satan.” That kid, Mitchell says, “is going to say, ‘Wait a minute. I met an American. And he was a Muslim. And he was nice. They are not all the Great Satan.'”

In March, inspired by the revolutions sweeping the Middle East, Salama released a new song and video called “Be Free Now.” But out of respect for pro-democracy activists, he’s postponed the release of his latest album, City of Lights, until May 24. The new album is a mix of country-western and catchy pop tunes. “I guess it’s just a gut feeling,” he says of the postponement. Releasing it now “might appear like, ‘He’s over there in America busy with his music and stuff, and we are going through this much more important thing.'”

Here’s the “Generous Peace” video, which tackles bias against Muslims and advocates turning the other cheek…