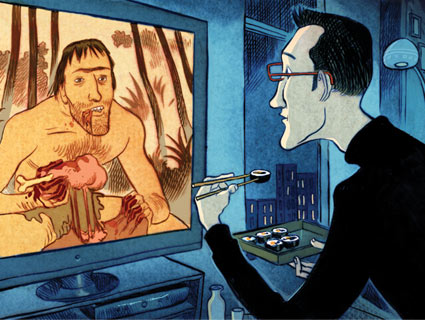 In the brutish and hardscrabble years after the flood, the bomb, or the zombie apocalypse, when the surviving bands of hunter-gatherers converge upon the ruins of the cities, they might discover amid the rubble of a still-smoldering Barnes & Noble a charred stack of cable-TV DVDs, circa 2011. They might cry out to one another, then—clutching the plastic cases in their raw and calloused hands—proclaim that here, brothers and sisters, here we sowed the very seeds of our salvation!

They might, I suppose. And they might one day rebuild their temples, these pelt-clad survivors, installing stone effigies of the ancient teachers from whom they acquired their neo-primitive skills: Bear Grylls, he of broad shoulders and larval diet, star of Discovery Channel’s Man vs. Wild; Steven Rinella, the thinking man’s hunter, host of Travel Channel’s The Wild Within; bear-like, braided Cody Lundin, the crunchier half of Discovery’s Dual Survival. Lately, we pre-collapse channel-surfers have encountered these and other bushcraft gurus with increasing regularity. Masculine and mud-caked, they have become a cable cliché, promoting subsistence techniques and aboriginal skills, dominating ratings, and occasionally besting heavy-hitting network competition like CSI and Glee. But with no clear prospect of an apocalypse (sorry, 2012ers), one has to wonder why.

Like any TV genre-of-the-moment, the roster of primitive-skills programming represents a series of variations on a theme. The ur-example is arguably Man vs. Wild, which premiered in the US on Discovery Channel in March 2006. In each episode, the buff and charismatic Grylls is dropped into an isolated and menacing location, then forced to find shelter, improvise tools, and eat carcass scraps, all the while offering lessons on how intrepid pioneers might have handled the situation. The show is phenomenally entertaining, owing largely to the schoolboy enthusiasm of the former British Special Forces host, who manages to sound exuberant even when delivering schlocky, back-from-commercial bumper lines like, “I’ve just dragged a dead sheep out of an Irish bog.”

From there, paleo-survival shows go one of two routes. The less apologetic variety adds a sitcom spin to the basic premise. In Dual Survival, the barefoot, granola-munching Lundin is paired with a khaki-clad G.I. Joe-type. In Discovery’s Man, Woman, Wild, a former Green Beret heads out into the barrens, taking with him only his wits and—what’s this?—his sophisticated wife. Mykel Hawke and Ruth England come straight out of central casting: He doesn’t speak so much as grunt, rubbing sticks together while sweat drips from his brow. She, a buxom blonde, braces when her husband tells her to drink his urine. (Notably, she’s the only female presence on the survival-TV landscape—unless you count Sarah Palin’s Alaska.) Both shows were renewed for second seasons this year after setting ratings records for Discovery in 2010.

On the flip side are programs with a bit more anthropological cred. The vaguely scholarly Beyond Survival features veteran Discovery Channel hero Les Stroud bunking up with “the true masters of survival: the last indigenous tribes in the most remote corners of the planet.” Meanwhile, over on Travel Channel, The Wild Within lays out a similar mission statement: “to explore the subcultures that cherish and maintain their hunting, fishing and gathering traditions.” Each episode follows author and host Steve Rinella as he tags along on food-finding expeditions (mostly meat-based) in some exotic place.

“The whole survival thing is a sham,” he says between bites of braised meat. “To fashion an arrow from a Coke bottle and kill a wild turkey…It’s just a voyeuristic fantasy thing, no different than watching Dungeons & Dragons.”

When I had lunch with Rinella earlier this year, it was in the decidedly urban setting of his Brooklyn brownstone. We did, however, eat taco meat from a javelina he’d shot in West Texas. Before lunch, I watched a rough cut of the baby-faced Michigan native crouched on a hillside, making the kill shot. Since Rinella envisions his show appealing mostly to active or wannabe hunters, he doesn’t see it having much in common with the more contrived entries in TV’s hunting-and-gathering arena.

“The whole survival thing is a sham,” he says between bites of braised meat. “To fashion an arrow from a Coke bottle and kill a wild turkey…It’s just a voyeuristic fantasy thing, no different than watching Dungeons & Dragons.” Rinella might be calling the kettle black a bit—in one episode, he stuns a live octopus by biting it—but it’s still a point well taken. While your average cooking or home-improvement show at least pretends to have some immediate application, fans of reality-survival shows can’t exactly get off the couch and fashion a wet suit from a seal carcass. How many of them would even want to?

For that matter, how many of the hosts want to? In 2007, Grylls and crew came under fire for staging scenarios on the set of Man vs. Wild. In one instance, a YouTube user revealed that a supposedly remote lava field was just a stone’s throw from the highway. Discovery responded by tacking a disclaimer onto the show.

“There’s a bit of Hollywood magic,” concedes Tim Smith, a Maine-based wilderness educator and former consultant on Man vs. Wild. “Depending on what angle you hold the camera at, you can make the hill look steeper, things like that.” Smith, who has his own pilot in the works for Animal Planet, theorizes that traditional skills have an increasing allure for Americans who feel alienated from the processes of filling their own basic needs—folks who can text, tweet, and play Bejeweled simultaneously while going through airport security, but would be at a total loss to start a fire.

Rinella, for his part, agrees that our fondness for these shows might stem from a kind of evolutionary nostalgia. “You don’t have to go back far in history to find people involved in Paleolithic activities,” he says. “There’s a lot going on with us physically and mentally that has to do with hunting and gathering, and it ain’t going away anytime soon. When you see these things represented, maybe in some way it speaks to you.”

But pining for yesteryear is not a new phenomenon, and surely iPhones can’t take all the credit for primitivism’s spiraling pop cachet. So why now? In his sociology text The Simple Life: Plain Living and High Thinking in American Culture, historian David Shi argues that the notion of simple, self-reliant living basically reinvents itself throughout American history, emerging and reemerging in a variety of forms—”the agrarian myth, the Adamic identity, the noble savage.” And according to Shi, this cyclical atavism tends to gain traction during times of national crisis. So just as Vietnam-era tensions birthed a dirt-worshipping back-to-the-land movement, might the financial meltdown and post-Obama culture war be prompting a waaay-back-to-the-land impulse?

“Simplicity is a perennial, but very elusive ideal,” Shi explains, “and you can substitute the word ‘primitivism’ for it…During periods of economic or social stress, not only does interest in simplicity revive, but it has the potential to reshape the contours of American values.”

Among network priorities, however, reshaping American values falls someplace (way) below selling Ford Rangers. Never mind our inner hunter-gatherer: The future of paleo-tainment hangs ultimately on its ability to keep enticing key adult-male demos—admirers of stone tools and pee-drinking, buyers of trucks and video games. So if survival TV should happen not to usher in a bold new era of self-reliance, well, at least we got to watch somebody eat bugs.