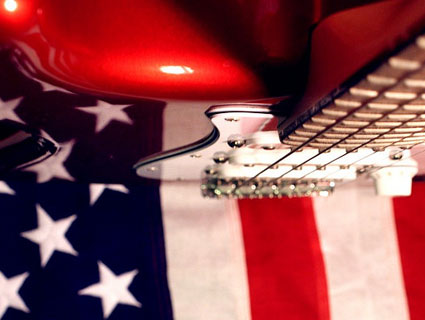 Happy Independence Day! (Last month it was Flag Day! Flag Day!) Whether you’re roasting a whole pig as the Founders intended, or just throwing some veggies—or peaches—on the grill, no July 4 barbecue is complete without a corresponding playlist.

Alas, America’s birthday has been held hostage for eons by the dull, repetitive compositions of John Philip Sousa. We’ll give the man his due, but after years of hearing it over and over again, “Stars and Stripes Forever” has begun to feel as interminable as the name suggests. He also famously predicted that the arrival of recorded music would cause people to stop creating new music altogether, and that “the vocal cord will be eliminated by a process of evolution, as was the tail of man when he came from the ape.”

So we thought we’d try something new: We asked you on Facebook for your favorite patriotic tunes. They didn’t have to be jingoistic—in fact, the best one aren’t. Just something that gives you a little bit of a pride in place when you hear it. And you responded—about 250 times, actually.

Here are 11 of our favorites:

Pavement, “No More Kings”: This adaptation of the Schoolhouse Rock classic tells the story of how a plucky band of patriots broke away from the cackling, purple-lipstick-wearing tyrant King George III—and did so with just four fingers on each hand.

Marvin Gaye, “Star Spangled Banner”: How to take a frequently butchered, oft-criticized anthem that’s set to an old drinking tune, and turn it into a classic: Step 1: Add Marvin Gaye. Step 2: There is no step 2. (Apologies to Jimi Hendrix.)

Bruce Springsteen, “4th of July, Asbury Park”: With an assist from some pals.

Lee Greenwood, “God Bless the USA”: Via MoJo Facebook commenters Larry, Heather, and Brandon (who prefaces it with an “Ok, I admit…”). We won’t judge, Brandon! One mitigating factor here is that Greenwood went on to write a nearly identical song called “God Bless Canada,” which strikes us on some level as patriotic bigamy.

James Brown, “Living in America”: Because like it or not, most of us are.

Titus Andronicus, “A More Perfect Union”: This one mixes Abraham Lincoln quotes, Harriet Beecher Stowe verses, independent-league baseball references, and an homage to Bruce Springsteen. If it were any more American, it would have to be deep-fried.

Johnny Horton, “The Battle of New Orleans”: In which a band of American misfits teamed up with a band of actual pirates (!!) and, apparently, alligators, to score an ultimately meaningless victory. We’ll take it.

Woody Guthrie, “This Land is Your Land”: Look. We know. Woody Guthrie was none too happy with what was going on in America when he wrote this song. But we’re pretty damn proud to be a part of a country that produces such powerful and aspirational expressions of discontent—and more generally, produces badasses like Woody Guthrie—and, ahem, Mary Harris Jones.

Funkadelic, “One Nation Under a Groove”: Gettin’ down, just for the funk of it.

Steve Goodman, “City of New Orleans”: Goodman looks visibly nervous during all of this, which only serves to make the song even more endearing. Trains! Morning! Working people! Rust belt scenery! America!

Ray Charles, “America the Beautiful”: A good note to close on. One of the classics, performed by one of the greats.