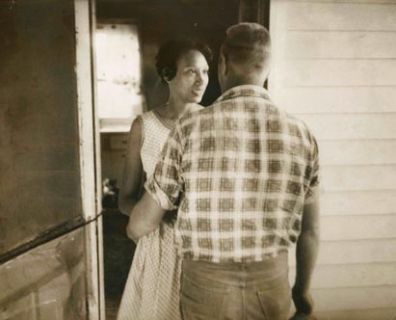 The most striking thing about Mildred and Richard Loving is that they never wanted to be known. They didn’t want to change history or face down racism. They just wanted to come home to Virginia to be near their families. The Lovings weren’t radicals. They were just two people in love—one of them a taciturn white guy described by one of their lawyers as a “redneck,” the other a sweet, soft-spoken young woman of black and American Indian ancestry.

When the The Loving Story makes its national debut on HBO on Valentine’s Day, it will be the first time many Americans have met this couple. They are the namesake of the landmark 1967 Supreme Court case that struck down the anti-miscegenation laws still on the books in 16 states some 13 years after school segregation was deemed unconstitutional. These laws constituted one of the last formal vestiges of the Jim Crow era, and this film shows for the first time what it took to bring them down.

Even as they changed America, the Lovings were never a household name. After getting married in Washington, DC, in June 1958, they simply returned to their home in Central Point, Virginia. Mildred was unaware, she said, of her state’s “Racial Integrity Act,” a 1924 law forbidding interracial marriage—although she later added that she thought her husband knew about it but didn’t figure they’d be persecuted.

Just over a month after the Lovings’ homecoming, police raided their place at 2 a.m., arrested the couple, and threw them in jail. Leon Bazile, a judge for the Caroline County Circuit Court, convicted them on felony charges. “Almighty God created the races white, black, yellow, malay, and red, and he placed them on separate continents,” the judge wrote. “The fact that he separated the races shows that he did not intend for the races to mix.”

Bazile agreed to suspend their one-year prison sentences if they would leave the state. So the Lovings opted to live in exile in the nation’s capital—90 miles from their hometown but a world away from their old rural life.

In 1963, after five years of sneaking back and forth to visit their families, Mildred wrote to Attorney General Robert Kennedy asking for help. Kennedy referred her to the American Civil Liberties Union, which put two young attorneys on the case. In The Loving Story, director/producer Nancy Buirski includes fascinating behind-the-scenes footage of the couple’s strategy sessions with their attorneys, talking about what to do if they are rearrested.

Asked by his lawyer whether he he had anything to say to the Supreme Court, Richard replied: “Tell the court I love my wife.”

But more enlightening is the extensive, high-quality archival video and photography of the Lovings just being a family at home. The film opens with an extended scene of Mildred helping their daughter, Peggy, put on her socks and shoes. There’s Richard—a square-jawed, crew-cut bricklayer—mowing the lawn or relaxing on the couch with the kids. Particularly striking is a Life magazine photo of Mildred standing on their stoop, the screen door flung open to greet her husband. Richard, dressed in jeans and a work shirt, has his back to the camera. His arm rests on Mildred’s hip and the light shines on her face, making it appear angelic—which is perhaps how he was seeing her then.

The Lovings had no idea they were going to change America. Nor did they particularly want the role—”I wasn’t involved with the civil rights movement,” Mildred explains at one point. “We were trying to get back to Virginia. That was our goal.” It wasn’t until 1967, when the case went to the Supreme Court, that they seemed to realize it was about more than just them.

Even so, the Lovings didn’t come to Washington to hear the oral arguments. They preferred to stay home. When their lawyer, Bernard Cohen, asked Richard whether he had anything to say to the justices, he replied simply: “Tell the court I love my wife, and it’s just unfair that I can’t live with her in Virginia.”

In a poll of Mississippi voters last April, nearly half of the registered Republicans said they thought interracial marriage should be outlawed.

Much has changed in the past 45 years. Then again, much hasn’t. Alabama didn’t get around to repealing its anti-miscegenation law until 2000. Just three years ago, a Louisiana justice of the peace refused to marry a white woman to a black man, citing concern that their marriage wouldn’t last and their children would “suffer.” (This was among the same arguments the Virginia attorney general once used in the Loving case.) In a poll of Mississippi voters last April, nearly half of the registered Republicans said they thought interracial marriage should be illegal.

Most Americans are okay with black-white marriage—a national poll this past September found that a record number approved. But 14 percent of us still don’t. What’s more, these marriages are still quite rare. As of 2009, only 550,000 married couples in the US—fewer than 1 percent—consisted of a black spouse and a white spouse.

These couples are also relatively rare in mainstream media—or at least realistic representations of them. Guess Who’s Coming to Dinner debuted nationally the same year the Supreme Court handed down the Loving decision. And while the film pushed boundaries with its subject matter, it revolved around the mere existence of an interracial couple as opposed to their relationship.

More recently, interracial marriage has been portrayed as shocking and sexual (1991’s Jungle Fever or 2001’s Monster’s Ball). Or as a punch line—see the 2005 remake of GWCTD with Ashton Kutcher as the unexpected guest. Sometimes race is treated as an insurmountable obstacle (as in 1991’s Mississippi Masala). Sometimes it is simply ignored (2009’s Away We Go).

Speaking as one half of an interracial couple, I find the latter approach most common these days. “A world where interracial couples almost never discuss race doesn’t feel real,” concurs Tampa Bay Times media columnist Eric Deggans, a black man who has been married to a white woman for two decades, in a recent NPR commentary. “It feels like avoidance.”

At one point, a TSA agent separated me from my partner, directing him to go stand with his “family”—a group of black people we’d never met.

Indeed, in real-world interracial relationships, race is impossible to ignore. Sure, it’s not something we think about when there are dishes to wash, bills to pay, anniversaries to celebrate, nephews and nieces to play with. But it’s always lurking on the sidelines. For one, we’ll never go on vacation in Mississippi. And there was that time a TSA agent separated us during an airport screening, directing my partner to go stand with his “family”—a group of black people we’d never met—while sending me to stand on the other side.

None of this, obviously, compares with what the Lovings faced on a daily basis. I can’t fathom what they dealt with. But there are still fears: What if people assume our kids aren’t mine? What if we don’t do a good enough job teaching our kids to appreciate all aspects of their heritage? What if I say something embarrassing in front of my husband’s family? And what do we do when our families say things that embarrass us?

The most compelling aspect of The Loving Story, ultimately, is the normalcy of the life it depicts—the normalcy this family was fighting for. If anything, I was hoping it would provide even more personal insight into the family. For while there are interviews with daughter Peggy and some family friends, Richard and Mildred are no longer with us—and one of their two sons has also died.

Even so, this story about the Lovings’ courage and determination is enough to make viewers care deeply about a legal decision—a decision that has particular resonance today, given the ongoing battle for marriage rights for same-sex couples. If a documentary can inspire us to look past the politics and punditry to recognize the humanity of the people our laws demonize, then it has certainly done the nation a service.