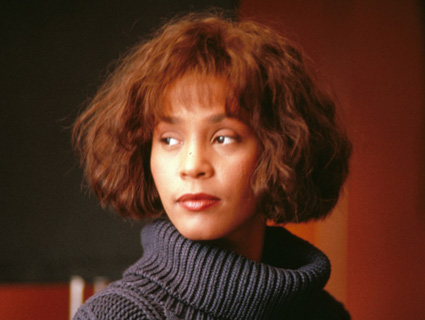 Whitney Houston in a still from the movie "The Bodyguard," November 1992Kasdan Pictures/Zuma

Here’s what we knew about Whitney Houston: My God, could she sing.

That was clear from the moment she burst on the scene in 1985 with her eponymously titled debut packed with an astonishing slate of what would be No. 1 hits and pop mainstays. “The Greatest Love of All,” “How Will I Know,” and “Saving All My Love For You” established her as a megastar—subsequently cemented with “I Wanna Dance With Somebody” and “I Will Always Love You” and pretty much any song where she’d lift her soaring vocals upward into that trademark key change. It would be fair to say that her talent was off the charts had she not spent so much time on them.

But Houston the public figure was far less knowable. That, if anything, has come sharply into focus in the wake of her tragic and sudden death yesterday at 48 in the Beverly Hilton on the eve of the Grammys, a stone’s throw away from the pre-Grammy party hosted by her mentor Clive Davis and the roost she used to rule.

The two main themes emerging in the reaction: 1) the sad loss of an incredible talent; and 2) the tragic fall of pop’s high priestess who, well, almost had it all.

In a broader way, these two themes match up with the two versions of Whitney that the public came to know. One was the beautiful, carefully packaged MTV-era pop star who we learned to love through ubiquitous radio play, glossy magazine fodder, and a steady parade of videos that featured the spotlit star flashing her huge smile and huger pipes, all while the camera lingered lovingly over her beautiful face and slender body. The other was the Whitney Houston who went off script, as missed tour dates and rumors of drug use led to public meltdowns, proof of drug use, and a public slide chronicled unsparingly by reality show cameras and tabloid press.

The arc of Houston’s public persona, then, can basically be told as a tale of two media worlds. When Houston launched her career, she did so into a highly controlled, finite-channeled media world. There was MTV, a channel for videos. There was mainstream radio—dominant in the hit machine—saturating the airwaves with her hits. As beautiful as she was talented (seriously, try watching these videos with the sound off, they hold up), Houston was pre-packaged perfectly as America’s Sweetheart in a time when those sweethearts were still white, a golden girl whose roots were clear but whose style was decidedly mainstream. As Rebecca Traister noted in 2006 in Salon: “Houston’s was one of the only black faces that white girls like me who grew up in the 1980s ever saw in magazines in our dentist’s office or in video rotation on early Af-Am-light MTV. For many black girls, she was the only young female role model presented in lily-white teen bibles or mainstream entertainment who looked anything like them.” (I was also a worshipful ’80s white girl. Like Traister, I know every word to those songs.)

She starred in movies (The Bodyguard, Waiting To Exhale) and minted more hits, capping off an incredible 15-year career with her Greatest Hits in 2000. But. In 2000 she also skipped out on performing for Clive Davis’ Rock n’ Roll Hall of Fame ceremony, got booted from the Oscars, and was caught at an airport with pot while traveling with then-husband, Bobby Brown. She got weirdly skinny. By the time she sat down an interview with Diane Sawyer in 2002, it was impossible not to raise the question not just of drugs, but of crack. And lo, Houston forever immortalized a new American catchphrase: “Crack is Whack.”

New updates of the couple’s continued dysfunction (Whitney in rehab, Bobby in jail) filled the echo chamber like a consistent hum. News was now being delivered online, after all. And a new type of media animal had come on the scene: the reality show. By 2005, the media world was sufficiently advanced that not only did Being Bobby Brown debut on the reality show network, but it was basically guaranteed an audience both as-it-happened as well after in recaps across the blogosphere. (It’s may be hard to remember now but back in that pre-Twitter pre-YouTube world, people still wasted a whole lot of time online.)

Being Bobby Brown presented the anti-golden girl, if there ever was. There was nothing soaring and pure about this Whitney. In 2006, the National Enquirer ran photos—”Inside Whitney’s Drug Den!” which by then wasn’t even a surprise. Cracked-out Whitney was immortalized by Maya Rudolph on Saturday Night Live. It was a recurring character. (Side note: Rudolph hosts SNL this coming Saturday. Should be interesting.) If Whitney the onetime ingenue had been the perfect, wholesome, pristine, and lovely Seventeen-model persona necessary to break through as a black woman in a white media world, this Whitney was the complete opposite: a caricature of how a black person falls from grace. (Related: “White people love Wayne Brady because he makes Bryant Gumbel look like Malcolm X.”)

Would old-school Whitney have been able to remain so unsullied in this new media world? Or would the real-time monitoring and relentless pressure to share have taken its toll? It was 1993 when Houston told Rolling Stone, “I am not always in a sequined gown. I am nobody’s angel. I can get down and dirty. I can get raunchy.” But it wasn’t until 2000 that we saw the proof. On the flipside, would latter-day Whitney have spiraled quite as fast without the implicit encouragement from Bravo’s cameras? Who can know, but one can assume that you’re less likely to be caught out of your sequined gown if a camera isn’t stationed outside your bedroom.

Going from the narrow media world of the ’80s mainstream to the 21st-century era of tabloids, reality TV, and online amplification is an arc indeed—and, alas, it couldn’t have been timed better to match Houston’s own.