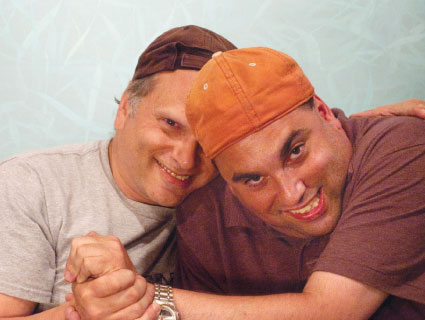 Coach Eric Taylor he’s not. You’d never catch Buzz Bissinger, author of the book behind the wildly popular TV series Friday Night Lights, rousing teenagers for an early morning practice. (And for that matter, you’d never catch his football coach protagonist going off on Twitter about “juice douching.”) Yet Bissinger has remained engaged with the world of sports, regularly churning up strong reactions with his columns, which tackle subjects like Linsanity and how Americans love football because of its violence. A 57-year-old father of three boys, he has managed a successful career as a journalist and author, nabbing a Pulitzer Prize for his investigative reporting at the Philadelphia Inquirer and serving as a contributing editor at Vanity Fair.

But for his new nonfiction book, Father’s Day, Bissinger turns to something a little more intimate: his tumultuous journey as a parent. The book centers on his relationship with his son Zach, then 24, a sweet-natured savant destined to spend his life bagging groceries and believing in Santa due to brain damage incurred at birth. In an attempt to feel closer to Zach, Bissinger drags him on a road trip from Philly to Los Angeles—”the worst cross-country route ever contemplated,” it turns out, thanks in part to his son’s predilection for amusement parks and distaste for scenic landmarks.

While Zach is compelling, it is Bissinger’s wry and uncharacteristically self-deprecating meditations on his shortcomings as a father, a guardian, and a writer that elevate the book from a troubled parenting memoir to a worthwhile rumination on the meaning of life. I spoke with him a month before the release of After Friday Night Lights, a Kindle Single published as a follow-up to his best-selling 1990 book—despite Bissinger’s insistence that he’s sick to death of hearing about that book.

Mother Jones: What led you to drag Zach on a road trip?

Buzz Bissinger: I wanted to do something where we could spend real time together. Cross-country trips to me have been seminal, whether it was with college friends or my future wife Lisa, and I wanted to share that with Zach. Unfortunately, he really didn’t like the car very much. But as the trip progressed, we really became closer and closer and fell into a rhythm of being on the road.

MJ: Why write a book about it?

BB: It’s just been this story that’s been percolating around for a long time. I think a lot of parents are afraid to express certain emotions about children who are different, because they think that it’s wrong to feel chained sometimes, to feel anger, to say to yourself, “I never wanted this.” I think it’s natural—that’s also the way I felt. Now at the end, it’s obvious how much I love Zach; it’s also obvious how much he showed me that I didn’t really know. But I wanted to get across that this is what it’s really like. It’s wonderful, but frustrating. It’s poignant, it’s funny—but there’s a lot of regret.

“Cross-country trips to me have been seminal, and I wanted to share that with Zach. Unfortunately, he really didn’t like the car very much.”

MJ: At one point, you write, “I love my son deeply but I do not feel I know him nor do I think I ever will.”

BB: With Gerry, Zach’s twin brother, there’s been a lot of back and forth conversations about schoolwork, or nervousness over college or girlfriends. With Zach, I’ve never had that. I certainly didn’t have it before the trip. It may have been the first time, instead of simply assuming, “Well, he is the way he is,” I began to watch and see in that mind—whatever the limits of comprehension—a pretty amazing child who has this ability to put the world together and to make it work for him. He’s much more self-aware than I thought. And he was much more observant than I thought. Even at the beginning, when he wants to get a little pocket square for the blazer because his uncle wears one. I mean, that’s stunning. I never thought he paid any attention to any of that stuff. Bringing the picture of my parents to Los Angeles was so touching. It was his way of memorializing them. And I think it helped bring me a sense of closure about them.

MJ: How are your twins are alike?

BB: Honestly, I don’t see how they’re alike at all. I really don’t. And that’s one of the wrenching parts. Zach has made great progress, but it’s not a similar kind of progress. He’s not gonna marry, he’s not gonna drive, he’s not gonna live independently. At the end of the book, when they’re on the roller coaster together, that’s when I saw them as similar. The same laughter and the same yelling, the same giddiness. But they’re very, very different and they always will be.

MJ: What would Zach think of the book?

BB: He’ll say, “pretty good.” You know, I’ve given him a copy. He hasn’t read it. Even if he did, I don’t think he would comprehend it. Which gives me a carte blanche but it also makes my responsibility that much more awesome. I worry: Did I expose too much of him? I really grappled with that, but I felt, at the end of the day, if you’re not honest in what you write, particularly in a memoir, then what’s the point?

MJ: In a lot of ways the book is a book about you. What’s something you learned about yourself?

BB: I’m reading the book for books on tape, and there are moments when I just can’t believe I got that impulsively angry. It’s something that I’m working on. I also found that once we did the bungee jump, the whole course of the trip changed and I felt the intimacy with Zach that has continued, and we’re both totally devoted to each other in a way that I don’t think we were before.

MJ: Why was that moment so important?

“I worry: Did I expose too much of him? I really grappled with that, but I felt, at the end of the day, if you’re not honest in what you write, particularly in a memoir, then what’s the point?”

BB: Before that the trip was up-and-down disaster. I had never held Zach like that and he had never held me like that. He’s not the kind of kid that sort of likes to hug, but I could feel sort of every bone in his body holding on to me. We really did feel physically inseparable at that moment. I don’t want to sound maudlin or ridiculous, but I think in a way that we’ve carried that over. He is the man—and not a man-child—that I admire most in my life. And he proved what Oliver Sacks said: that within all of us, whatever the impairment, lies this need to be whole.

MJ: You recently tweeted: “Fuck Friday Night Lights. I wish I hadn’t written it, so I wouldn’t get comments like yours.” You say this even though many people consider it one of the best sports books ever written?

BB: I think, more accurately, there are times I wish I had written it when I was older. It’s just very hard when you write something that young and it becomes that successful, for reasons of luck, or having the right timing or the right execution. I was 35, and now, at 57, I hear someone mention that book virtually once a day. It was not the best book I ever wrote. The best book I ever wrote was about Philadelphia. In that case, it was some cheap shot he was giving me: “sinking pretty low for a guy who wrote Friday Night Lights.” Well that guy can go fuck himself.

MJ: Why even bother to respond?

BB: That’s an excellent question. My wife says, “You’re an idiot! Why do you Google your name and all you’re doing is looking for trouble?” Because I’m thin-skinned. Because I don’t like to be mischaracterized. I just don’t. If someone is going to criticize what you’ve written and you believe in what you’ve written then you should respond. Now do I sometimes fall in the gutter myself and look silly doing it? Of course. Some battles I win, some battles I lose.

MJ: You wrote in a recent column that your only friend is your dog, and even that’s iffy. Does your dog only like you half the time?

BB: Actually, my dog I think is the only person who consistently loves me all the time. I was just kind of joking. I don’t have many friends in Philadelphia. I sort of have one. I have the dog and someone else.

MO: On Twitter, you made a New Year’s resolution to no longer use the word “fuck.” How’s that going?

BB: Out the fucking window. It’s not gratuitous: My father swore like a sailor, I swear like a sailor. It’s really the way I talk. I think I broke that resolution on New Years Day.