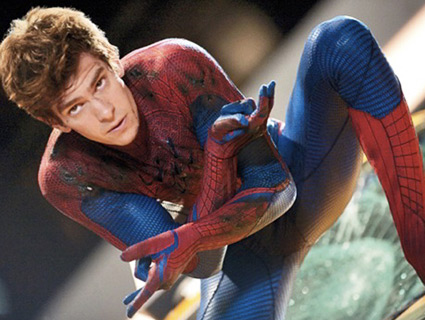 If you don’t have a dimly lit sequence in which an Armani-clad and very emo Peter Parker breakdances in the middle of a crowded nightclub right before furiously back-handing his ex-girlfriend in the face, then you have honest to god FAILED as a Spider-Man movie.

Sad to say, this is hardly the greatest problem with the franchise’s reboot.

With The Amazing Spider-Man, it’s almost like Hollywood is trying to prove it can rebrand its product at the rate of modern pop-music repackaging. For example, you know how Katy Perry was out there covering “Born This Way,” like, an hour after Lady Gaga released the original? Well, it feels like it’s been just a couple weeks since the original Spidey installment hit theaters. (Okay, 10 years, but the sentiment remains.)

Those first three installments—despite some tonal missteps and that Green Goblin horror-show of a costume—amounted to a top-notch trilogy. With the slick and heartfelt Spider-Man, the jaw-dropping Spider-Man 2, and the beautiful train-wreck that is Spider-Man 3, director Sam Raimi really knew how to meld efficient popcorn flash with comic book geek-out. But due to creative differences and the standard Hollywood BS, Spider-Man 4 got dumped, Raimi was out, and the studio decided it needed something fresh.

So here we are, a half-decade since No. 3, with a new movie that fumbles and stumbles on its glaring familiarity and its even more glaring deficit in kinetic energy. This latest entry probably couldn’t have been any more of a disappointment if the producers had hired Bono to write the soundtrack.

The Amazing Spider-Man hits the reset button, kicking off with Peter Parker (a goofy Andrew Garfield, supplanting a goofy Tobey Maguire) back in high school, getting the hang of being Spidey. Mary-Jane Watson is M.I.A., and Gwen Stacy (Emma Stone) is in as Spidey’s love interest. Harry Osborn, Peter’s best friend, is nowhere to be seen. And Dr. Curt Connors (Rhys Ifans)—a one-armed scientist who turns into a psychotic lizard—is this Spider-Man’s inaugural arch-villain (not the damn goblin). Other new stuff: Actor/comedian (and professional Bill Hicks joke-stealer) Denis Leary plays a grumpy police captain, Forrest Gump’s mom shows up as Aunt May, and President Bartlet is Uncle Ben.

In the director’s chair this time is Marc Webb, the music-video ace who won over indie gawkers with his work on 2009’s (500) Days of Summer. Webb’s near art-house level of restraint is perhaps the biggest drag on the movie. His touch somehow manages to be both lighter and vaguely darker than Raimi’s; and what the film gains in aesthetic grit, it sacrifices in heart and sheer fun.

Now, before I complain even more about this, check out this TV spot in German:

And as our hero swoops from building to building, saving child to child, karate-chopping jailbird to jailbird, there’s rarely a lasting visceral pang to be felt. In the two central set pieces (one involving a bridge, the other a skyscraper) the lack of audacity in action choreography is depressingly comparable to the manner in which the cerebral Marc Forster handled the nonstop gunplay in Quantum of Solace: a unique cross between lassitude and overcompensation.

Not to be unduly harsh, The Amazing Spider-Man does have one semblance of a saving grace: The cast is spectacular. For starters, the cheminstry between Stone and Garfield is electric, charged with just enough sexual heat to make you temporarily forget the cuddle-warmth of Maguire-Dunst. And Ifans continues to surprise with his impressive range (on display in recent months in The Five-Year Engagement and Anonymous). Martin Sheen and Sally Field are all kinds of blue-collar awesome.

But the impact of the caliber acting is drowned out, because the actors have little more than retreads to work with. Corporate giant Oscorp is still up to no good. Flash Thompson still starts out as a meathead bully. Uncle Ben still gets shot by someone whom Peter could have stopped. And Peter Parker is once again back in the saddle of adolescence and bone-weary virtue. We’ve watched too much of this before, not very long ago, and with sounder execution.

The lack of much that’s new or exciting makes this cast and crew a tribute band to its predecessors, attempting to recapture the allure of a product that may be past its shelf life. And thus the boredom seeps in.

Here’s to hoping that the inevitable Amazing Spider-Man, Part Deux will pack more of a punch.

The Amazing Spider-Man gets a wide release on Tuesday, July 3. The film is rated PG-13 for sequences of action and violence. Click here for local showtimes and tickets.