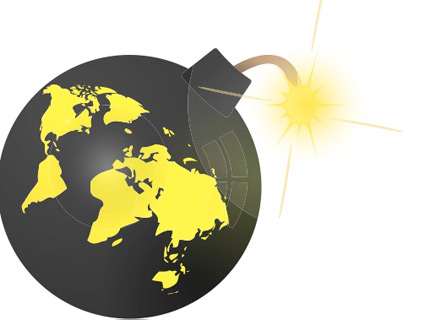 Lately, you’ve probably heard rumors that the world will end on December 21, 2012. You’ve probably brushed them aside as piffle on par with theories about Barack Obama being a lizard overlord. Yet, polling data shows that 12 percent of Americans believe the end is indeed upon us, while 14 percent of people worldwide think Earth will be a goner in their lifetime.

So, first things first: Will the world in fact end on December 21?
No, almost certainly not. [Update, 5:30am EST, December 21: Still here! So far, so good.] Superstition suggesting otherwise is based on junk science, Nostradamus (sort of), and flawed readings of the Mayan Long Count calendar. A comet is not going to hit us that day. Earth will not collide with the fictional rogue planet of “Nibiru.” And if there are belligerent alien forces plotting against mankind, that’s probably a ways off.

However, that doesn’t mean there aren’t any good questions left to ask. Here’s everything else you wanted to know about the supposed 2012 Mayan Doomsday but were far too afraid to bring up:

What do stock brokers and Matt Damon have to say about the Mayan apocalypse?
In August, TD Ameritrade referenced End of the World theories in this ad for its investment business. The gist is that if we don’t all die horrifically in December 2012, TD Ameritrade will still be able to help you out with retirement planning. The 30-second ad is narrated by the star of Happy Feet Two and We Bought a Zoo, Matt Damon, who replaced Law & Order alum Sam Waterston in January as the “new voice” of TD Ameritrade. Behold the bizarre kicker in which Damon asks calmly but triumphantly: “So who’s in control now, Mayans?”

What do actual real-life Mayas have to say about all of this?
At least some of them are rather pissed, and understandably so. Ethnic Maya of Guatemala (of which there are millions) have long had to endure efforts by government and the local tourism industry to profit off of misunderstandings of what the ancient Mayan calendar indicates. “We are speaking out against deceit, lies and twisting of the truth, and turning us into folklore-for-profit,” Felipe Gomez, head of Mayan alliance Oxlaljuj Ajpop, told AFP in October. “They are not telling the truth about time cycles.”

“The Maya never said anything about the end of the world or anything about a great change in the universe on [December 21, 2012],” David Stuart, a professor of Mesoamerican art and writing at the University of Texas at Austin, told the Huffington Post. “The calendar not only continues after that date…it goes 70 octillion years into the future.” 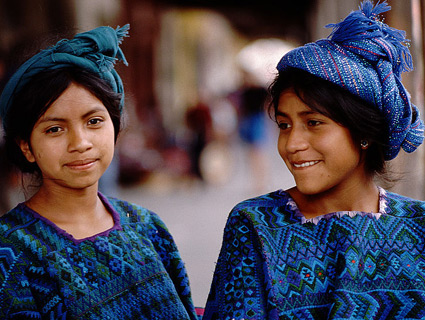 What is the government doing about this? Are they being proactive?
Yes, indeed: For its part, NASA has flooded its social-media operation with anti-doomsday content, in hopes of chipping away at public misconceptions over what will or will not end this month. They’ve hosted a Google+ Hangout debunking the theories, created a special FAQ page, and posted information on YouTube and Facebook. Here’s one recent tweet aimed at quelling potential panic:

Internet telling you the world will end in 2012? Don’t believe it! Get the real science facts here. go.nasa.gov/cQnq0L

For some NASA scientists, this is serious public-awareness stuff: “I get 1-2 [questions] a month from a person who self-identifies as 11-12 years old, who is contemplating suicide,” David Morrison, a senior scientist at the NASA Astrobiology Institute, told ABC News. (Speaking to a USA.gov blogger, Morrison later said that he gets a message at least “once a week” from “a young person…who says they are ill and/or contemplating suicide because of the coming doomsday.”) Morrison also highlighted a letter he received from someone claiming to be a middle-school teacher in California, who wrote that parents of a student said they were going to kill their kids and themselves before the 2012 apocalypse.

Has Barack Obama weighed in yet?
No.

But has Glee, though?
Yes. For the 2012 Christmas episode.

What does Andrew W.K. (the hard-rocker / would-be “cultural ambassador of partying” to Bahrain) have to say?

Are there any goofy videos out there about this?
Yes. Next Media Animation, a Taiwan-based “animated news” studio known for its tongue-in-cheek and over-the-top depictions of current events, produced a segment in 2011 on various apocalypse theories. Here’s the video, which features Jesus wearing and operating a jetpack:

What are other countries doing about this?
Mayan-apocalypse-freakout is hardly just an American phenomenon. The Russian government—along with the Russian Orthodox Church—has been busy telling citizens not to pay attention to the armageddon talk. Government officials in Mexico, France, and elsewhere have been doing the same.

One member of the Russian parliament’s environment committee had a particularly drastic measure in mind: Prosecute Russian citizens who spread the rumors, but only starting December 22.

Are any world leaders making satirical videos about this?
At least one of them has:

That’s Australian prime minister Julia Gillard, having fun with the doomsday theories during a morning broadcast. Gillard says the following to her “dear remaining fellow Australians”:

Whether the final blow comes from flesh-eating zombies, demonic hell-beasts or the total triumph of K-Pop, if you know one thing about me, it is this: I will always fight for you to the very end.

She ends her address with a simple, “Good luck to you all.”

But is anyone making tsunami-resistant survival pods? Just in case?

Why, yes. This guy: A Chinese furniture maker named Liu Qiyuan who constructed a Great Ball of China in the village of Qiantun in Hebei Province. “The pod won’t have any problems even if there are 1,000m high waves…It’s like a ping-pong ball,” he told reporters, right around the time he jumped in his pod for a photo op.

How might a Mayan apocalypse affect fiscal-cliff negotiations?
Good question. First off, we probably wouldn’t have to worry about the so-called fiscal cliff anymore, mainly because we’d all be preoccupied with human civilization ending. This may actually be John Boehner’s best hope. Also, it’s hard to make entitlement cuts and raise taxes on the wealthiest of Americans when the planet no longer exists.

How is Fox News handling this?
They’re being pretty damn fair and balanced. Here’s a preview of the special titled “Countdown to Doomsday” (hosted by Bill Hemmer) that the network aired in November:

Can I practice consumerism right up to the bitter end? And if so, where can I buy Doomsday merchandise?
Sure. You can buy stuff from the folks who run the December212012 website (which provides a sorta CliffsNotes version of a “survival guide”). They have apparel available on CafePress, including this T-shirt: 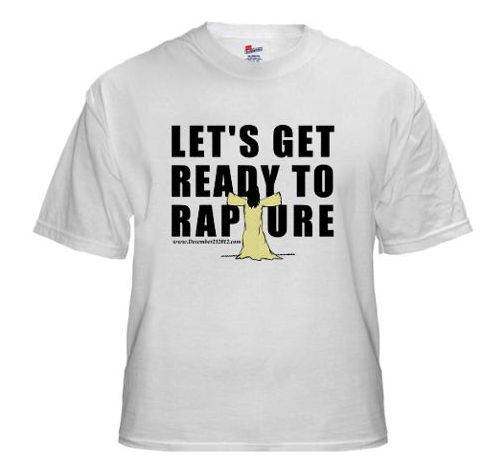 Is there apocalypse pizza? How about apocalypse vino?
Yes, and yes! That would be courtesy of the small farming community of Bugarach, population fewer than 200, at the foothills of the French Pyrenees. Rumors have been swirling for years that alien life forms will emerge from their “spaceship garage” hidden in the town’s mountain and beam up the locals to safety during The End.

Naturally, Armageddon tourists and UFO enthusiasts have made the pilgrimage to the French commune in anticipation of the big day. And there’s good food and spirits awaiting them. The Daily Mail has the scoop:

On the evening in question, tourists can pop to the local Italian restaurant for an ‘Apocalypse pizza’, washed down with a local vintner’s ‘End Of The World’ vintage.  If the predictions turn out to be wrong, they can celebrate with the same wine-seller’s ‘Survival Vintage’, on sale a day later.

Police and troops have been drafted in to deal with the sudden influx and stop believers from scaling the mountain. Although many believe this is merely a cover for the investigation of dozens of recent UFO sightings.

Unfortunately, it’s not all good wine and pizza: French authorities have to worry about the very real possibility of mass suicides by apocalypse cultists who may show up.

Okay, I’m still a bit worried. What’s the actual percentage chance that the world could maybe, possibly end on December 21, 2012?
Hard to pin an exact number on it. But for a frame of reference, over the next 10 billion years, Planet Earth has a roughly 1 percent chance of getting obliterated by a supernova gamma ray. And those are the odds for a phenomenon that exists, not for one made up.

So is the main takeaway here that Roland Emmerich was wrong?

Yes—as he is prone to be.

Any other burning apocalyptic questions? Put them in the comments below, and we’ll see if we can get to them!